We've cited time and again over the years that Gold plays no currency favourites. But let's face it: this recent selling in Gold was getting a little ridiculous given the Dollar's having taken on a more material demise of late. Why, even the once-venerable Reuters in countering the conventional wisdom that Gold and the Dollar trade in indelibly-negative correlation noted last Monday that "...Gold and Dollar Pay the Price...", (perhaps their writers have been sensibly peeking at The Gold Update), as the Biden Vaccine and other purported policies get set to save the world from COVID and the cruel StateSide ways.

But regardless as to how one chooses to couch it, until this past Monday (30 November), both Gold and the Dollar from a month ago (21 trading days) had been slipping down their respective slopes. Then come these last five trading days (from the white bar in the below chart), Gold -- the true currency --- finally broke ties and saw fit to rise vis-à-vis the Dollar -- a faux currency -- furthering its own demise:

As for our endeavouring to keep pace with Gold's machinations of late, we've been all over the place! Going on for many-a-week about Gold's essentially consolidating rather than correcting, price truly began correcting, our thus affirming so a week ago, to then instead reverse right back upward and settle this past week yesterday (Friday) at 1842 in recording its second-best weekly net gain (+3.3%) since that ending 31 July. A lovely recovery indeed after our chasing Gold sideways, then down, and now up. Next, does Gold go "3D" in popping directly out of your computer display to "stick yer beak"? (BritSlang for the nasal-swipe COVID test...) "Hey Mabel! I've tested positive for GOLD!" ... "Lucky you, Egbert."

Nonetheless, popping further down their negative track are Gold's red dots of parabolic Short trend as we next see across the weekly bars from a year ago-to-date. And whilst the distance from Friday's close up to the rightmost red dot is 120 points -- the nearest a close has been to its respective red dot these past four weeks -- Gold's "expected weekly trading range" of 80 points makes it still quite the stretch to imminently flip the trend to Long; however the duration of this Short trend is now (at 15 weeks) the most since the summer of 2018, and prior to that since the price-gutting spring of 2013: 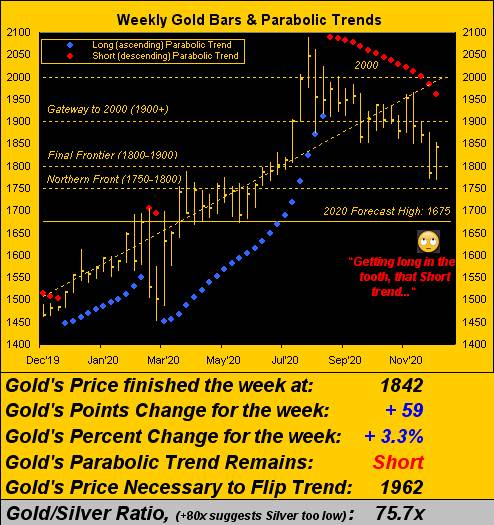 Moreover: since a) Gold's broader trend is up per the above diagonal dashed trendline, b) price has tested the once-resistive now-supportive Northern Front (1750-1800), and c) the ongoing follies for more faux dough are ever-favourable for Gold, as we wrote a week ago: "...our directive sense for Gold is as bullish as it has been in quite some time." Indeed as we recently penned a great Gold friend: "...We may well look back at this point and say: 'That was the time to load up.'"

And as up as ever continues the track of Gold's 300-day moving average, the bright blue line as shown here across these last nine years. That average -- presently at its own all-time-high (1710) -- has not registered a negative kink since 13 June 2019, (on which date 'twas 1269 with Gold itself at 1337). To the blinders-wearing technician wrongly looking at Gold as a commodity, price much reach down to touch, indeed penetrate, that average. To the common-sense analyst rightly looking at Gold as a currency, 'tis the average that need play catch-up to price itself, which we sense is "soon" destined to break above its All-Time High of 2089:

Or Squire, more saliently put: recall our graphic of two weeks back documenting Gold's three "BOING!" price leaps within the past two years, with a fourth justifiably in the balance? The roughly-rhythmic time lapse between them has been some three-to-four months. The most recent "BOING!" culminated at that 07 August All-Time High (2089): which was four months ago. Obviously such "rhythms" don't pan out in perpetuity; but one might argue that the next "BOING!" is nigh, and further, the number of points encompassing the prior three were respectively +301, +337, and +420. Just sayin'...

Meanwhile, FedChair Powell is sayin' his Bank's monetary activities have unleashed some $2 trillion of both private and public sector support in countering COVID economic fragility. That said, Chicago FedHead Evans just said that November's slowing in job increases doesn't argue for policy adjustment. Indeed as we turn to the Economic Barometer, Non-Farm Payrolls' growth of "only" 245k was practically just one-third of both expectations and those for October. As well, the Institute for Supply Management recorded slowing in both its Manufacturing and Services Indices. Still, the Federal Reserve's Tan Tome released this past Wednesday indicated expansion in the majority of the Fed's districts, clearly in line with the Econ Baro's overall climb out from COVID. But of late on balance, the Baro has begun abating even as the S&P 500 (red line) amorally makes record highs:

Next to "The Now" for the precious metals, beginning per our two-panel graphic for Gold with its daily bars across the past three months on the left and 10-day Market Profile on the right. Note the baby blue dots having just turned upward at their -80% axis: that ought herald higher prices still for this new up leg toward testing the early November price consolidation in the 1848-to-1898 zone. As for the prices depicted in the Profile, there's our old friend 1830, and by volume traded, more so 1812 as key supporters:

And for Silver, her "Baby Blues" (below left) did not come off as consistently negative as did those for Gold, the picture here appearing a bit firmer. As well in her Profile (below right), she is at present priced higher therein than is Gold by same. And broadly, Sister Silver remains the more attractive of the two metals, the Gold/Silver ratio now being 75.7x, some 14.4% above the millennium-to-date average of 66.2x:

Thus is the stance of Gold with just 18 trading days left in 2020, indeed in this -- the second decade -- of the 21st Century. Seems that party for "Y2K" was but yesterday. Time is fleeting, as are folks in San Francisco fleeing The Barbary Coast and once mighty gateway to Gold Country. As you regular readers know, earlier this year we ourselves fled said unsanitary "magnificent city that is dying", and apparently we're not alone.

The population of San Francisco per a year ago is estimated at 881,549 within which there are 365,851 households. According to the city-based independent news source "Public Comment" in collaboration with the United States Postal Service, during 2020's eight-month stint from March through October, 124,131 of the households filed for a "change of address" of which 89,328 -- 24% of total households -- designated addresses outside of the city, including for Nevada, Oregon, Colorado and even Florida. As a long-time family friend (also now moving out) exclaimed to us on the telephone this past summer, "There are moving vans everywhere!"

Thus our recommendation for all those folks selling their $2,000,000 San Francisco run-down ramshackle houses is to elsewhere buy the same amount of property or more -- for a fraction of the price -- and avoid the Dollar's being sold to invest the balance in Gold! 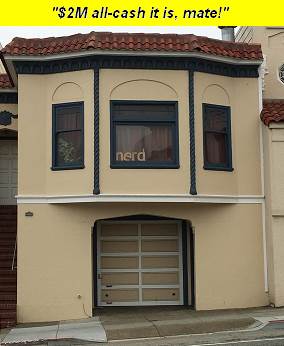