Gold claws back above its 200-day moving average

Friday’s dramatic $66 price decline took gold prices below their 200-day moving average for the first time since December 1, 2020. Even more alarming was the fact that after trading to a low of $1828, gold futures traded off the low closing at $1,836 which is four dollars below its 200-day moving average. Today we have seen an increase in volatility and an exaggerated range with gold opening at $1849, a mere $9 above the 200-day moving average, and then trading to an intraday low during the evening session of $1817 before recovering.

As of 4:48 PM EST gold’s most active February 2021 Comex contract currently up by $11.60 and fixed at $1,847.00. With all three major indices, the Dow, the S&P 500, and the NASDAQ composite trading lower on the day, and concurrently a strong selloff in Bitcoin, market participants have re-focused their attention on the safe-haven aspect of gold. Today’s price increase was strong enough to overcome dollar strength. Gold futures are currently trading up +0.63%, and the U.S. dollar is up +0.48% currently fixed at 90.485. This means that had we seen a neutral dollar today gold would have gained a total of 1.11%. 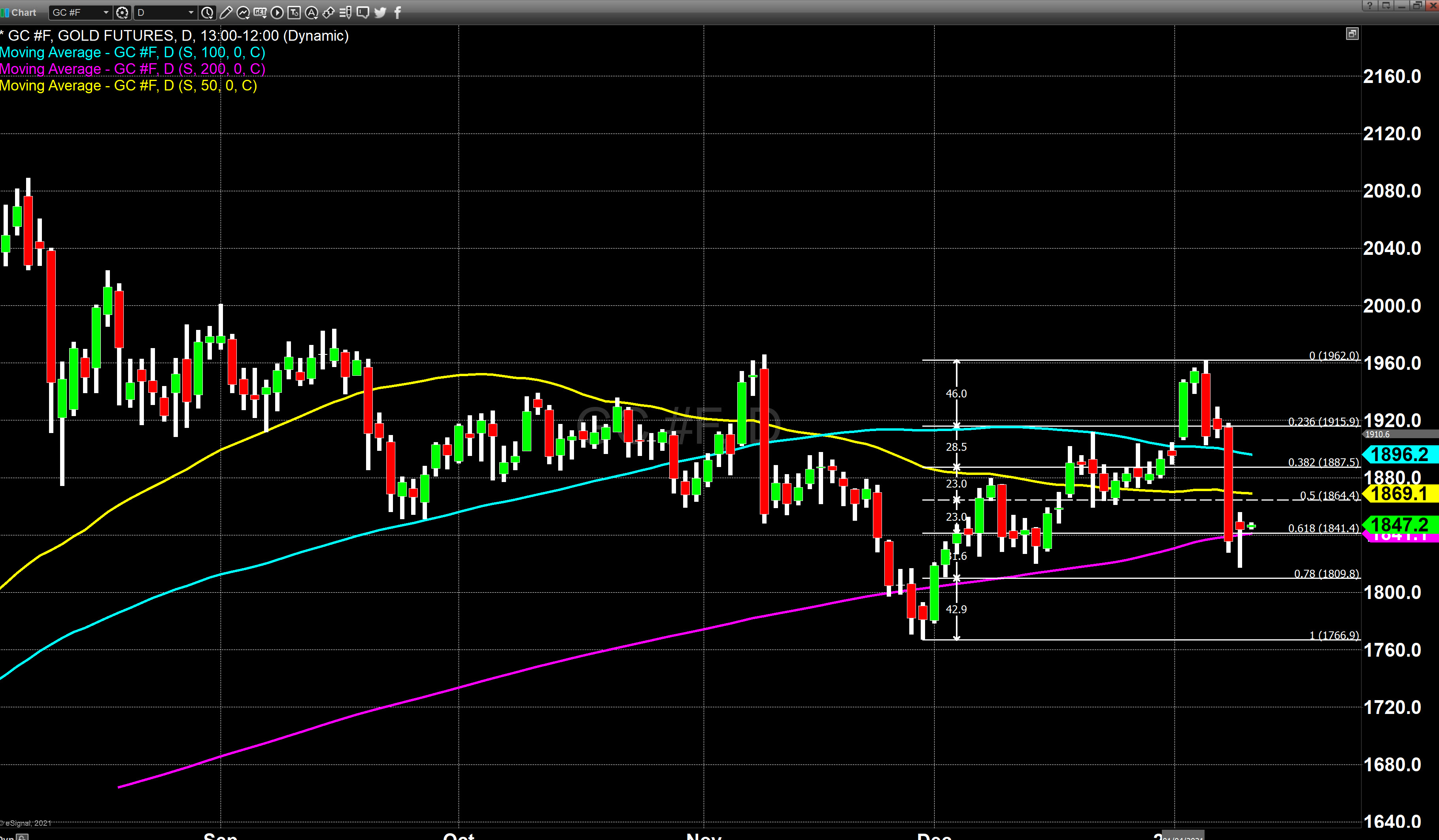 Many analysts including myself believe that Friday’s strong selloff in gold was magnified or exaggerated possibly reflecting a rebalancing from gold into Bitcoin as the cryptocurrency broke $40,000 per coin for the first time in history. On Friday BTC hit an intraday high of 42,611.00. Recent action in BTC took pricing parabolic, with last week’s range containing a low of proximately $28,000 and a high of $42,000. But as any market analyst will explain typically a market that moves up in a parabolic manner has that same strength when it corrects, exactly what occurred today. Currently the most active BTC contract (CME’s bitcoin futures) is fixed at $33,800 putting it down $5,720 (-14.42%).

Our technical studies have indicated the following levels could become major levels of support. The lowest of these levels occurs at the 50% retracement that is currently fixed at $1,768.60. Above that price point, the next level is the 200-day moving average is currently fixed at $1,840 just above that is the 38.2% Fibonacci retracement level created from a data set beginning in March when gold traded at $1,400 to the all-time record high of August 2020 at $2,088. While current gold pricing is close to the levels of support that we have spoken about the first strong level of resistance occurs at $1,869 which is the current 50-day moving average.

The fundamental events that took pricing to a new record high are still very much with us. They continue to shape and determine market sentiment. On Thursday President-elect Joe Biden will lay out his budget for the next round of fiscal stimulus in which he has warned that it will be in the multiple trillions of dollars. When added to the $4 trillion worth of fiscal stimulus allocated over two rounds by the U.S. Treasury Department the net result takes the United States budget deficit the largest amount in history. Also because of this recession, brought on by the Covid-19 pandemic continues to worsen even as vaccines are being rolled out globally. Then there is the potential, although remote, that Trump supporters will continue to wreak havoc with intel suggesting militants plan on storming capital buildings in every state next week.

Collectively these events will at best slow down the attempted economic recovery, and at worse could have the ultimate effect of a continuing economic contraction worldwide. It is for those reasons that the upside potential remains solid even though gold traded dramatically lower on Friday.