Gold moves off of today's highs and closes modestly higher

Gold futures basis the most active February 2021 Comex contract traded to a high overseas last night of $1864, before giving back a large percentage of the gains, closing up by $4.30 (+0.23%), and is currently fixed at approximately $1855.40. This will mark the second consecutive day in which gold has closed higher than the previous day.

On Wednesday, January 6, 2021 gold futures managed to trade to a high of $1960 before market sentiment quickly turned bearish, creating selling pressure that would last for three days and take gold futures down to $1908. Thursday’s action resulted in gold closing higher than Wednesday but lower on the day.

However, it was Friday, January 8 when market participants witnessed the steepest single day decline since November 9, 2020. Novembers decline resulted in gold giving up $102. Gold futures opened at approximately $1915, but selling pressure took the precious yellow metal significantly lower to $1835. On last Friday gold prices opened above the 100-, 50- and 200-day moving averages and closed below all three key averages. This is the first occasion since November 27 that gold pricing traded and closed below the long-term 200 day moving average. 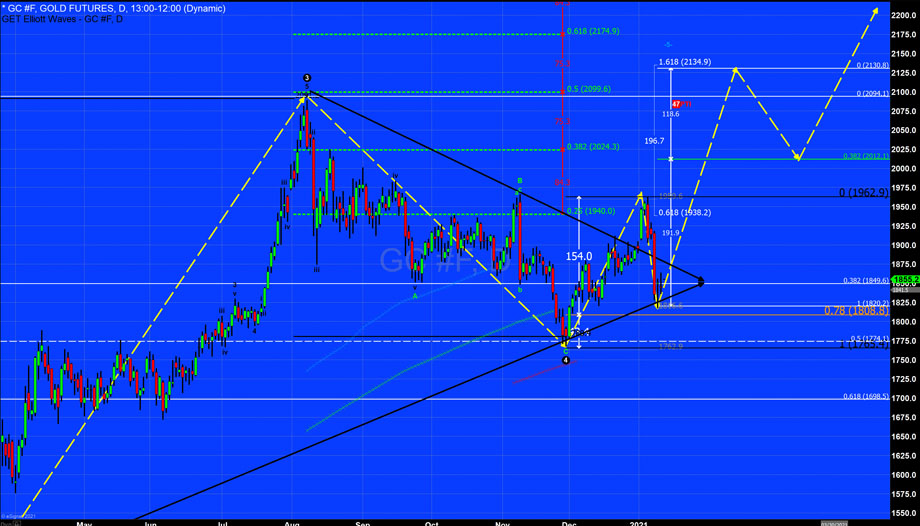 Although Mondays low dipped below $1820 for a brief moment, prices recovered and gold closed once again above $1850. This marks the second consecutive day on the price range between the open and closing pricing is above the 200-day moving average. It also is a strong indication that gold pricing is attempting to form a base before moving to higher pricing.

As long as gold remains above $1840, the current fundamental events which took gold prices to its all-time record high last year are continuing to wreak havoc on the global economy. In March last year the coronavirus epidemic officially became a global pandemic. Today there been over 91 million individuals who have become infected by the virus resulting in almost 2 million deaths worldwide. More worrisome is the fact that in many parts of the world daily Covid-19 infection rates are at an all-time, and now even with a vaccine being administered globally, the virus responsible for the pandemic has mutated. This mutation is harder to contain, which leading to higher infection rates. This is the primary cause for the global economic contraction, as many countries mandated measures to curtail the spread of the virus and in essence locking down many parts’ world.

The global pandemic is directly responsible for the trillions upon trillions of dollars that countries worldwide have needed for aid and financial support for the millions of individuals that lack a viable means of support, along with countless businesses that are under immense pressure to simply remain solvent.

With the upcoming inauguration of President-elect Joe Biden, it is highly expected that he will present one of the largest stimulus packages in history. President-elect Biden announced on Friday that there was extremely need for extra financial relief for Americans” now”. This announcement came following the latest US Labor Department’s jobs report which showed losses for the first time in eight months.

The most important day this week will occur on Thursday when President-elect Biden will be “laying out the groundwork” for his COVID-19 relief package. The aid package he presents could easily dwarfed the $4 trillion already allocated for the first two rounds of fiscal stimulus by the US Treasury Department over the last six months. Combined the trillions of dollars that will be needed could easily be the largest expenditure, and that the United States has ever incurred. This means that even after the pandemic has run its course the economic fallout that will occur will be felt for years to come.