Buy the dip in silver

Silver just dropped about 10% in three trading days, and some are freaking out.

I think this was a classic case of buy the rumor, and sell the news.  As we crossed from 2020 into 2021, precious metals were assessing and pricing in the outcome of a Biden confirmation and the Senate runoff.

Once those two elements were solidified, silver traders decided to sell.

With that in mind, the question now becomes: what’s next for silver?

Why Silver Sold Off

Let’s start with what happened.  Here’s my take.

Silver, like gold, rallied through December and into the start of January, anticipating increasing government control by the Democrats.  I believe it peaked on January 6th, especially as confirmation of the Democrats’ win in the Georgia Senate runoff was added to Biden’s confirmation.  It meant the Democrats would have effective control of the White House, Congress and Senate; a likely powerful combination.

However, what it also means is that easy-money policies and fiscal stimulus are about to get an even bigger shot in the arm.  As this projection suggests, Biden’s programs will cause the debt to jump dramatically in relation to GDP. 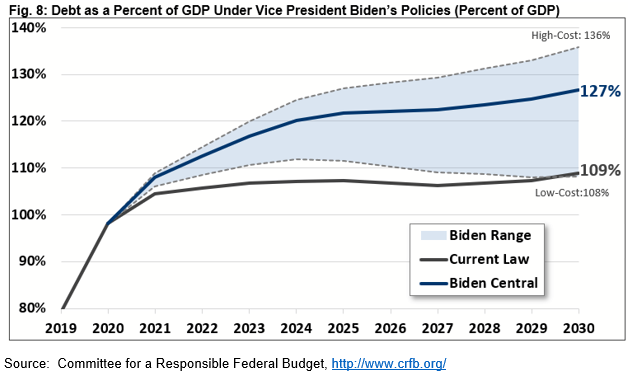 Biden has already said he believes the latest $900 billion pandemic relief package won’t be enough.  We’ll know more this week, but it’s a sure bet fiscal restraint will not make a surprise appearance anytime soon, as Biden promises his stimulus plan will cost “trillions”.

I certainly hope no one reading this is shocked.  But there’s a market-related aspect to silver’s selloff as well.

It didn’t hurt that the US dollar had become very oversold. 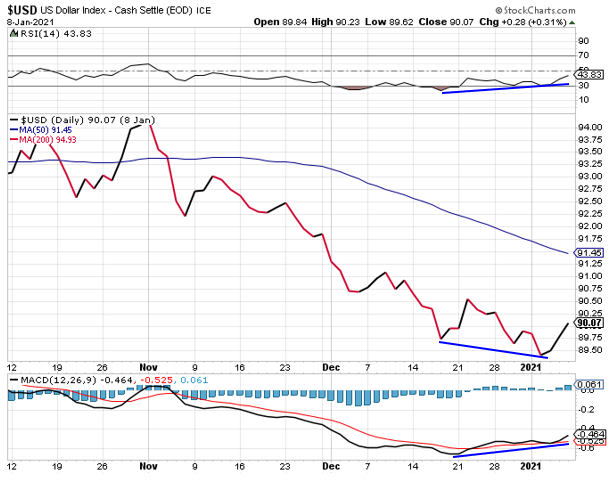 The dollar continued to fall all though December, but the RSI and MACD momentum indicators started to trend higher from mid-December, showing positive divergence and suggesting a counter-trend rally was likely.

Then we had bond yields rally noticeably. 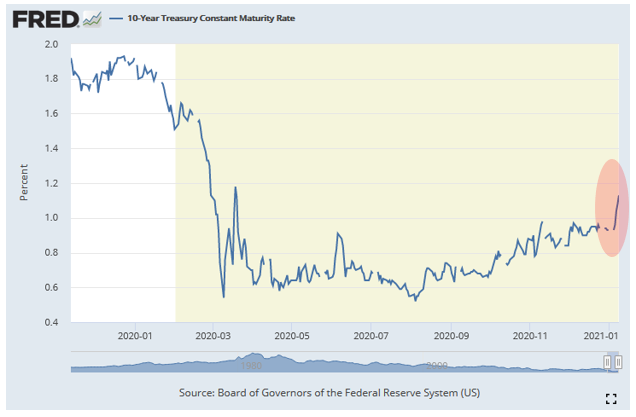 In fact, they’ve just broken through the psychologically relevant 1% benchmark level, likely triggering automated buying.  But let’s be honest about this.  Long-dated treasury yields impact everything from mortgages to car loans to corporate borrowing.  The Fed is not going to let that run unchecked, as it would stifle lending, the last thing they want to see now.  Yield curve control can’t be far off.

So the dollar’s recent 120 basis point bounce, coupled with a jump in long-term yields, were two additional headwinds for silver.  The dollar made it more costly, and bonds became a more attractive alternative through higher yields.

Looking at the price action in silver suggests there’s nothing to get excited about unless, of course, you want to buy. 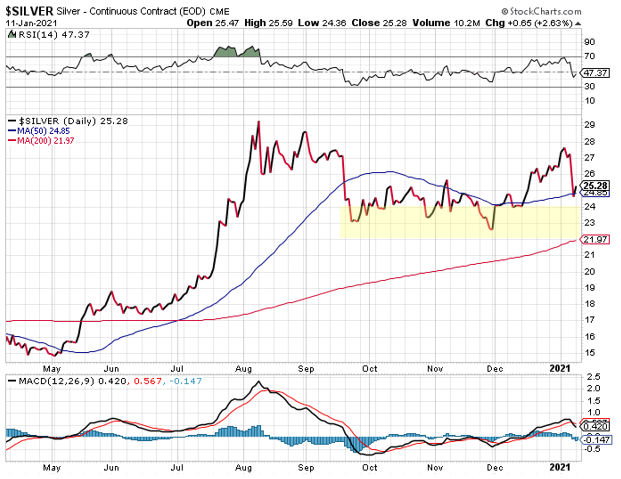 Silver’s retreat from its recent high has pulled it back to the 50-day moving average.  I think that could hold.  If more selling takes over, look for a bottom in the $22.50 - $24 range.

As for silver stocks, they’ve been holding up quite nicely. 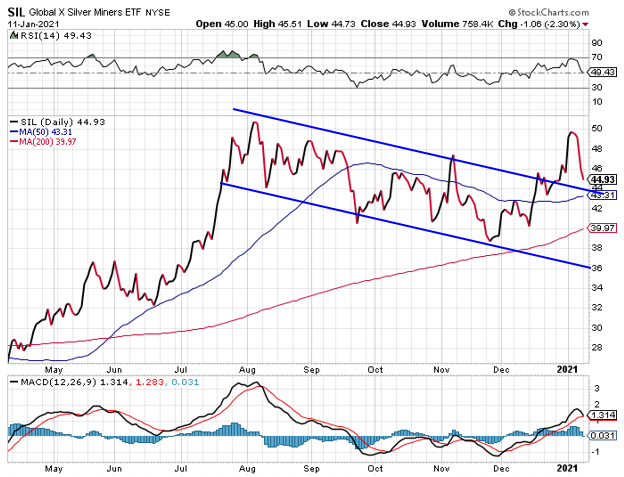 Interestingly, silver stocks have been outpacing gold stocks, even dramatically so. 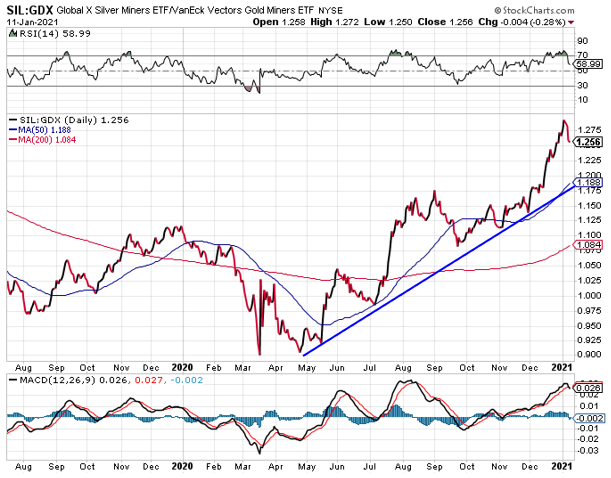 That outperformance has been clear going back all the way to late April.  This suggests ongoing strength in silver, gold and their related equities, as well as silver continuing to lead the precious metals higher.

In early December I said, “If you don’t own any silver, now looks like a great time to layer in, buying in regular intervals over the next weeks or month…Caution: silver is heading into a massive bull market.  Large gains, coupled with volatility, lie ahead.”  That’s has certainly turned out to be the case.

In my recent interview with industry titan Rick Rule, President and CEO of Sprott US Holdings (click here for interview), he addresses and how we need to expect volatility, especially in silver, and use it to our advantage. He also points out how much of his fortune has come from silver investments, and that in silver bull markets, even the large cap companies can generate 5x to 10x returns.  Outsized gains can be obtained without taking outsized risk.

Just remember, we’re in a massive silver bull market.  Corrections and drawdowns will happen again.  They should be embraced, not feared.