With Biden in the White House, Trump's hallmark policies with the exception of 2017 tax cuts, are being undone. Would that be true also about the stock bull market that I called back in spring 2020? Still in autumn that year, I've been saying that there isn't any stopping of the bulls (for now).

The Fed's foot is back on the pedal, but inflation hasn't reared its ugly head yet – the path of least resistance for stocks remains higher. Unless the corona vaccination programs disappoint the markets, hurting cyclicals and the breadth of stock market advance, that is. Such a turn would take quite some activist economic policy steps to counter, as you can imagine.

Can there be a better indicator than the dollar having rolled over to the downside, which I called in early summer to have happened? Ever since, the dollar has been largely on the defensive, and I projected that to last well into 2021. Here we are, with mammoth stimulus plans, minimum wage hikes, Green New Deal coming – you name it, we have it – and my prediction is naturally valid also today.

Wait, there is one more clue, and that's interest rates. Slowly but steadily, they're rising, especially on the long end. With the decreasing foreign appetite (did you know that Russia's gold reserves already surpassed its dollar reserves in value terms?) for U.S. government bonds, the Fed will have to step forward increasingly more. Rising rates will be reinforcing inflation as the two go hand in hand. Rising rates thus can't be viewed exclusively as bullish spirits returning into the real economy, but as an inflationary surprise looming that will also be reflected in growing outperformance of international stocks vs. the U.S. stock indices.

Now that you know what's up, let's dive into the technicals (charts courtesy of www.stockcharts.com). 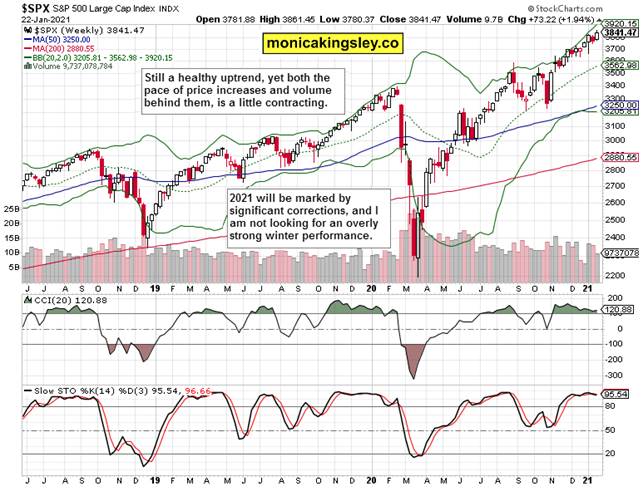 2021 is about stocks trading near the upper range of their Bollinger Bands volatility spectrum. The weekly indicators haven't flashed sell signals, yet volume isn't at its strongest. Still, it's representative of an ongoing bull market, where 2021 won't however be as good a year for the stock market as 2020 was.Still, it'll be a good year where S&P 500 would comfortably beat not only the 4,000, but 4,200 mark. We'll also experience significant corrections but the nearest one won't arrive in February in earnest. I see the coming month as a relatively weak one, muddle through if you will.

The daily chart shows the upward sloping trend channel nicely, with the breakdown attempt at the turn of the year soundly defeated. The daily indicators seem to favor largely sideways to mildly higher trading action in the nearest days. That's one point of view, with the other being that prices haven't declined enough to lure in the buyers yet. Given the volume examination, I lean towards sideways trading coupled with an unsuccessful push lower as the most probable scenario over the coming 1-2 weeks. Then, higher prices. 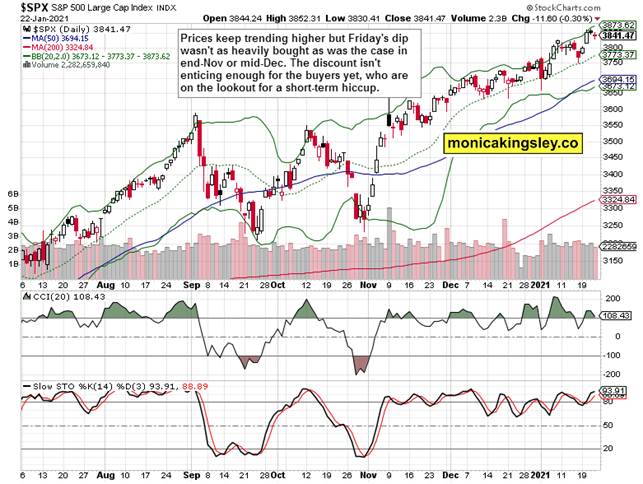 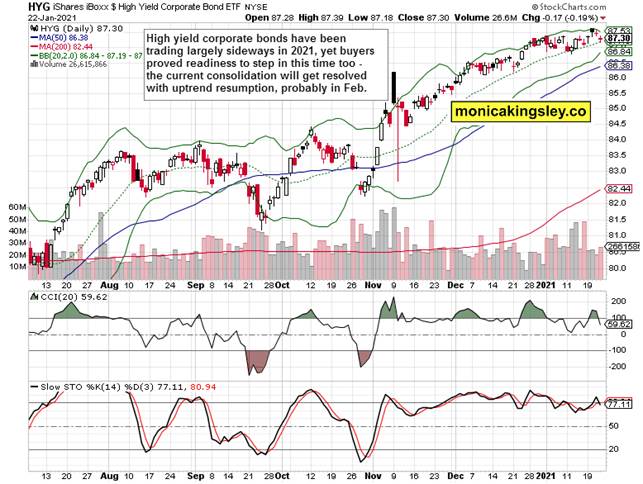 High yield corporate bonds (HYG ETF) aren't pushing higher as vigorously as they had been recently. A sell signal? Hardly. Sign of caution? Don't jump the dgun. I count on the pattern of higher highs and higher lows to continue, supporting the stock market rally. 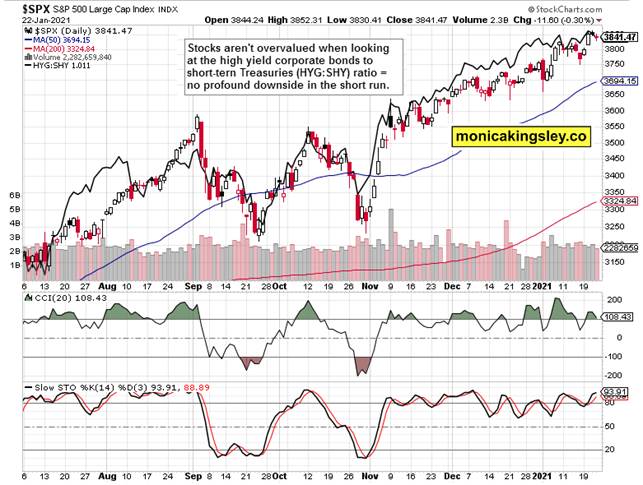 The ratio of high yield corporate bonds to short-dated Treasuries (HYG:SHY) isn't flashing danger yet either. Visually, there is no relative overextension to S&P 500, and the recent moves favor muddling through with an upward bias over the coming weeks. 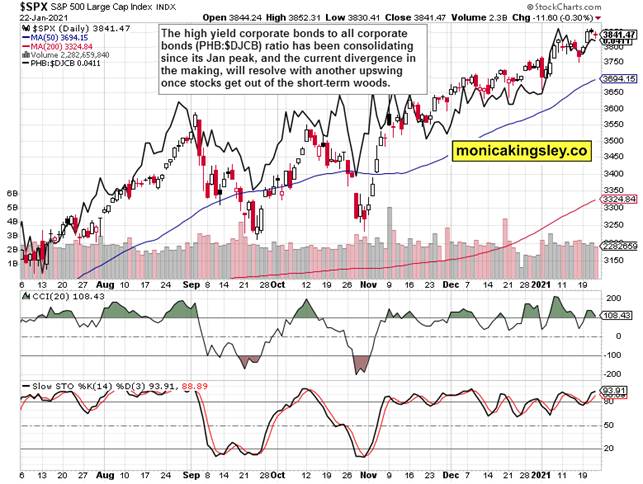 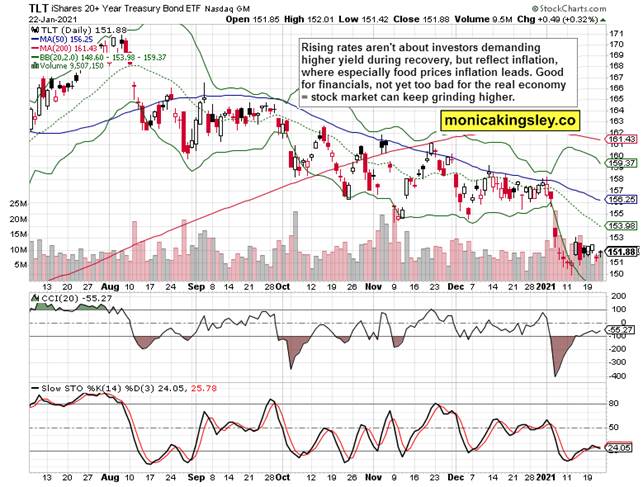 Rising Treasury yields (i.e. falling Treasury prices) are synonymous with economic expansion but a bit more is at play in 2021. This year, I am turning towards the explanation of inflation slowly but surely making a return, which is nowhere better seen than with the food price indices. The Fed also says that food price inflation is the best predictor of forthcoming, broader inflation. That explains quite nicely the rising rates in the face of the real economy waiting for months for the stimulus to arrive. 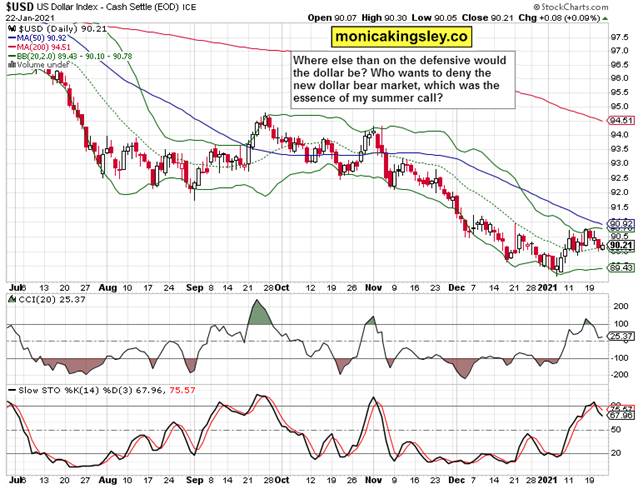 With the dollar stuck deep in its bear market as one more sign of the inflationary storm striking this year, who would want to take the other side of the trade? 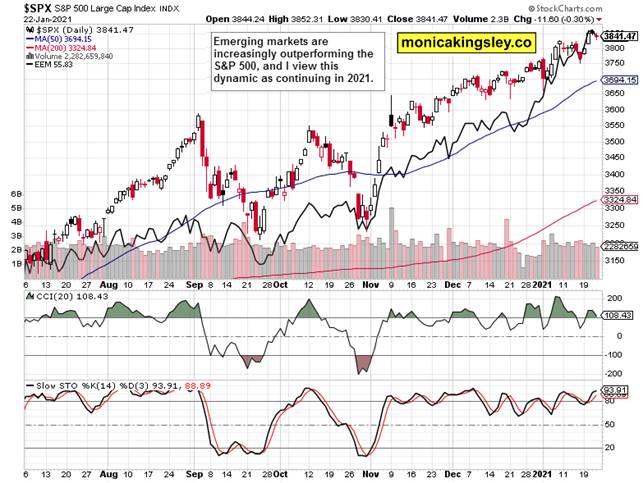 It's my view that we've entered the era of emerging markets (EEM ETF) outperforming the U.S. indices. That doesn't mean the S&P 500 would crater, but it would lag behind in appreciation. The emerging markets support the stock upswing to go on still. 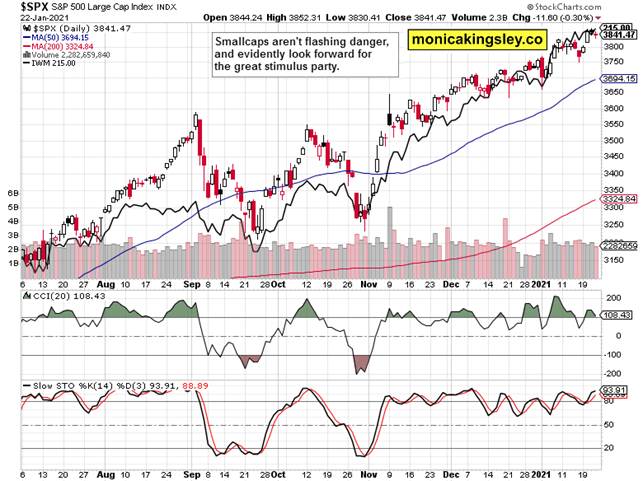 The Russell 2000 (IWM ETF) keeps trading in sync with the S&P 500, helping in its rebound from the mid-Jan lows. Their strong performance shows that they expect smooth sailing for the announced $1.9T stimulus plan. 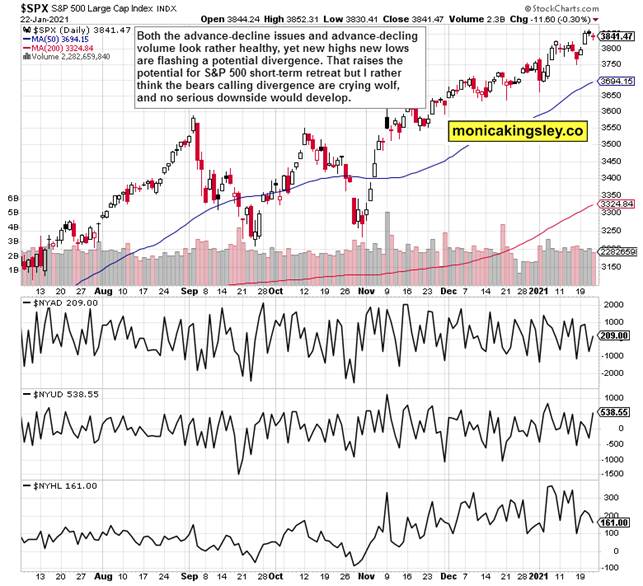 New highs new lows are the only (temporary) fly in the bullish ointment here. Spelling solid potential for a bear raid, I look for the downside from this divergence in the making to prove rather temporary and shallow.

Let's talk real money, these safe haven assets. Yes, given the 2020 performance and cues from monetary policy taken, it's hard to argue that Bitcoin didn't behave as another fiat currency nemesis. Still, I'll focus on precious metals within this section, because I'll be introducing Gold Trading Signals in the near future, so stay tuned for yet another daily publication of mine. 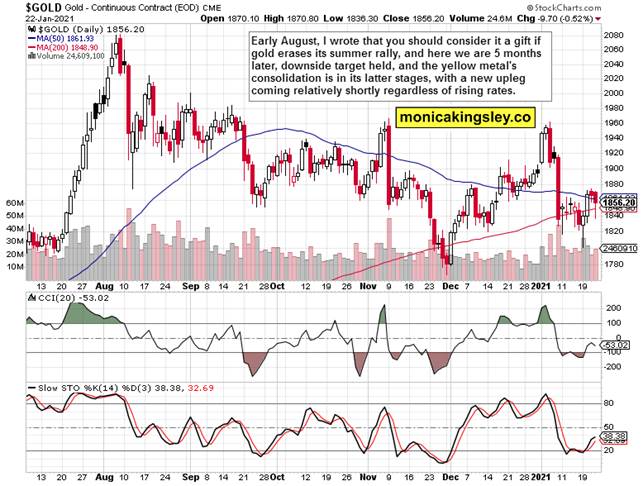 Another market call that proved correct – gold didn't really give up all its summer rally, and the prolonged base building is in its latter stages. Yes, it's my view that we're going to see gold fireworks enter this spring, and that these prices represent a favorable entry point for a medium-term oriented investor. As for the short-term one, I'll cater to their needs in my upcoming daily publication, and today, with my first 2021 analysis, aim to provide you with a big picture view over the financial landscape at large, kind of my gameplan for the first half of 2021 if not more. 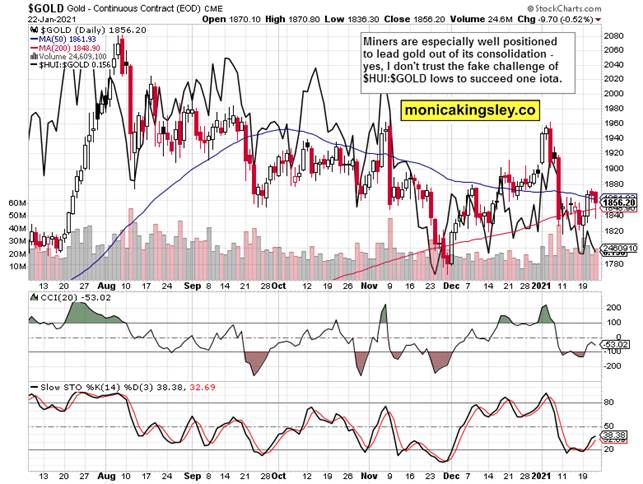 The gold miners to gold ratio is trading at favorable levels for the buyers, and I look for the miners to start performing better over the next few weeks. The healthy period of long base building is drawing to an end. Silver would also join in the party, and the gold chart is sending a signal that this is going to unfold before too long. 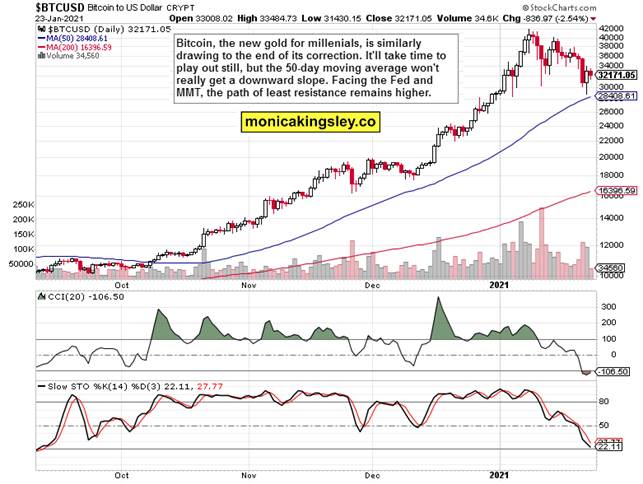 Bitcoin, the greatest beneficiary of aggressive monetary policy in 2020, agrees. Its chart pattern would favor some more sideways trading as a healthy precondition of another upleg, but don't be surprised if the cryptocurrency correction doesn't flatten the 50-day moving average. Yes, I'm looking for the bulk of the corrective move in terms of prices, to be over already.

Over the coming two weeks of earnings reports, stocks are in for some short-term volatility. Sizable correction? Not really. But we're trading at quite elevated levels, and the month of February is shaping up to be weaker than January. No doubt about it, but there won't be a correction to speak of this early in 2021. With the Fed stepping up its balance sheet expansion, the monetary policy hasn't yet lost its charm, and inflation isn't on the radar screen of most.

Investor sentiment is at greed, but not extreme greed. The put to call ratio is rising, which points to a not so smooth sailing ahead. Still, the bull market has better days in its future, but given the momentary balance of forces and especially the risk-reward ratio, I'm not jumping in with both feet. As this is my first analysis in 2021, I'm actually waiting on the sidelines for now. Subscribers to Monica's Insider Club, which features the trade calls and intraday updates for both Stock Trading Signals and Gold Trading Signals, would know right away when I make any move.