Other than during a rally from Thanksgiving until New Year, gold stocks have been under pressure for nearly six months.

The correction itself was not a surprise, but the structure has been different from the corrections during the 2000s.

Those corrections entailed a quick decline and then a recovery of most of the losses, on the way to at least a few more months of consolidation. In 2009-2010, the corrections were especially brief.

The current correction is nearly six months in, and the gold stocks are fairly oversold and trading just above strong support levels.

Breadth indicators signal a market that is oversold but could register an extreme should GDX test $32. 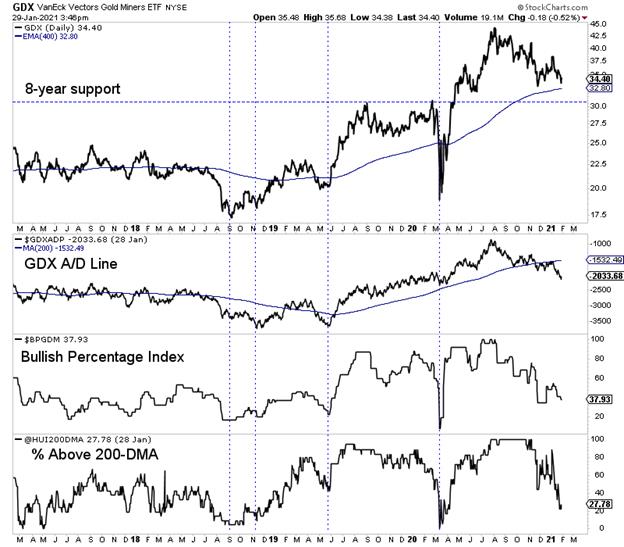 Meanwhile, the prognosis for GDXJ is similar. It has a confluence of support at $47 and $45.

As with GDX, the breadth indicators are oversold but could become more oversold. 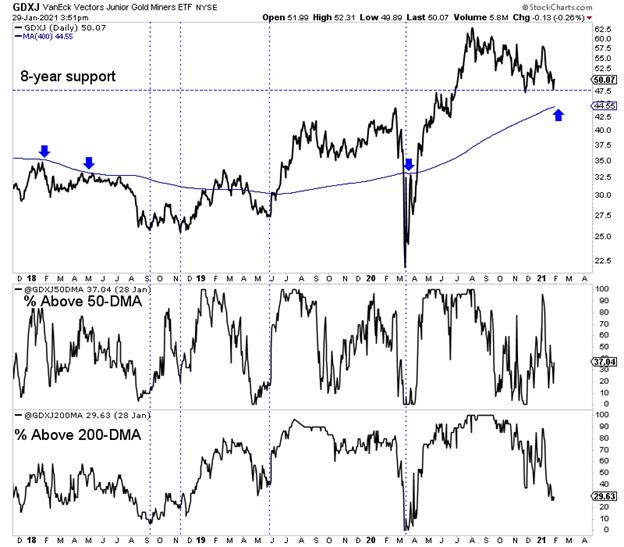 The gold stocks could rally from here, but they are missing a few things we like to see around a bottom.

First, there is no positive divergence in the GDX advance-decline line. Second, GDX and GDXJ have not been outperforming Gold.

In addition, while the miners have rebounded a bit in recent days, none of the daily candles signal accumulation.

The miners are oversold and setting up for a rebound, but my guess is they aren't quite there yet. A $2-$3 decline in GDX and GDXJ would make things easier by bringing them to strong support and likely pushing breadth indicators to oversold extremes.

There is a bit of uncertainty around this bottom but what is much less uncertain is buying high-quality juniors, trading well off their highs, and around excellent entry points.

In our premium service, we continue to identify and accumulate those quality companies with considerable upside potential over the next 12 to 24 months.

There may only be a few chances to buy these stocks before they take off. One of those few chances figures to be now or within a few weeks. To learn the stocks we own and intend to buy that have 3x to 5x potential, consider learning more about our premium service.