It hasn’t been a tumultuous week politically or socially, at least not to the degree I feared seven days ago, but gold has been all over the place. I’ve had lots of conversations in the last week about why gold isn’t doing better. Would that I had a clear answer!

· Those who own gold as insurance against uncertainty selling because even an attempted coup in Washington didn’t derail the markets.

· Treasury yields moved up 23% in the first 11 days of the year before settling back a touch, as bond traders sold (pushing prices down and therefore yields up) in the expectation that Biden’s $2 trillion in new spending will mean a flood of new bond issuances. I think this – bond yields moving higher – will remain an issue for the short term but not is not a headwind that will endure. The Fed just can’t allow rates to move much higher because immense government 2 and corporate debt load mean a real, sustained increase in debt service costs would cause a huge amount of damage. The problem may take care of itself (US bonds as a price investment regain traction amidst growth) or may require Fed intervention along the lines of yield curve control.

Poor retail sales numbers for December and big increases in weekly unemployment claims added to questions about growth in the immediate near term. The reflation trade – buying things that perform when stimulus cause inflation – relies on stimulus creating growth, cause that’s what creates inflation. 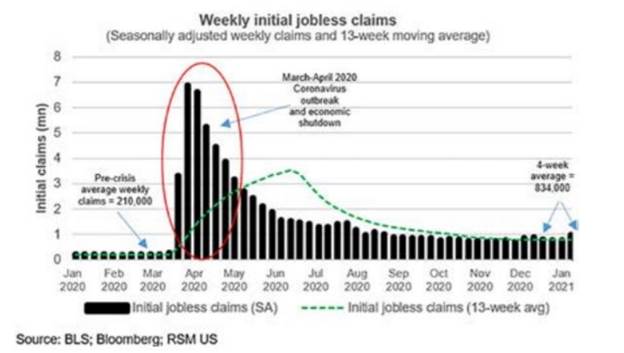 That’s what happening. What’s coming? It totally depends on inflation (or reflation, if you prefer the term that specifies inflation stemming from stimulus). And it’s very hard to know how that will go. 3 Lots of economists and talking heads are certain all the stimulus spending will create inflation. I hope they’re right. But there’s one data point that stands directly in opposition to that: velocity of money. 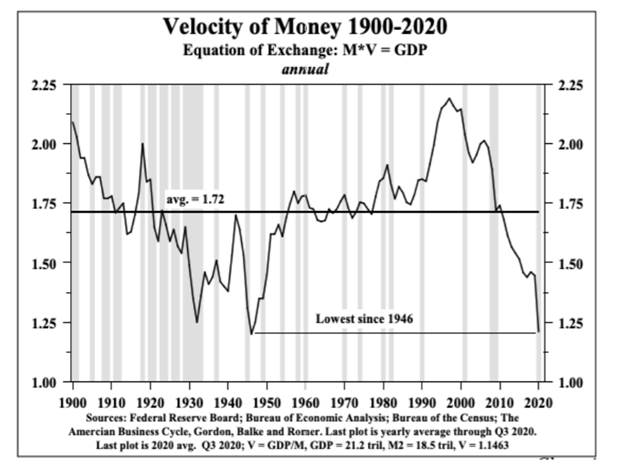 The above chart is from Hoisington Investment Management, whose economists (Van Hoisington and Lacy Hunt) are renowned for their macroeconomic analysis.

· GDP measures account for growth but fail to account for wealth destruction and so are far too rosy · The multiplier effect from stimulus is “sharply negative in highly indebted countries”, defined as central government debt exceeding 60% of GDP. Of course, most of the major economies of the world meet that bar! The United States doubles it at 127%.

· Finally: as the chart shows, the velocity of money fell 17.7% in 2020 such that velocity for the year averaged 1.2, the lowest level since 1946. If money isn’t moving, it can’t create inflation. Hoisington and Hunt conclude that bond yields will continue to fall (which is a pro-gold conclusion) but that inflation will not manifest (which doesn’t help gold). As a result, they are bullish bonds for price gains. That game has worked well for several decades. As they point out in their latest quarterly letter: “in a short 12 months the 30-year US Treasury realized a 20% return, compared with 18.4% for the S&P 500.” And the game works just fine for gold. If investors keep buying bonds for returns, bond prices will keep rising and yields falling. When I talk about ‘real rates’ I point to nominal interest rates minus inflation, but the market watches real yields just as, if not more, closely.

Those are bond yields minus inflation. Hoisington and Hunt may not think inflation is coming to help but they see yields continuing to fall, which supports the argument for gold nonetheless. 4 I diverged into all of that because I spend a lot of time thinking about inflation and whether it’s really going to rear up in 2021.

I’m torn. Thankfully, arguments like this reinforce that it doesn’t really matter. Sure, inflation would help the argument for gold. But rates are rock bottom already so real rates are already well negative while real yields are close to and falling.

The fact that investing in bonds has become a price game, rather than a yield game, changes the rates argument for gold somewhat. It used to be that negative rates pushed investors away from bonds because the reason to buy bonds was for yield. Now no one buys bonds for yield, so that argument is less persuasive.

Instead, the argument is that the immense debt issuances and debt loads that changed the bond game create a different need: to hedge in case of crisis. I am not doomsday-er but today’s big picture doesn’t make much sense. Sky high equity prices in a recession. Huge demand for zero-yield bonds when debt loads are already immense.

Central government debt standing at 127% of GDP, well in choking-off-growth territory. COVID-caused small business bankruptcies left and right. On and on. The markets can stay irrational far longer than I can stay solvent so I’m not betting on an imminent crisis. But I also am far from alone in wondering if, when, and how a straw might break this camel’s back.

Gold is an answer to that worry. And even though the rationale for the yellow metal being perfectly inversely correlated to real rates is weaker today than it was 20 years ago, the relationship remains very strong. 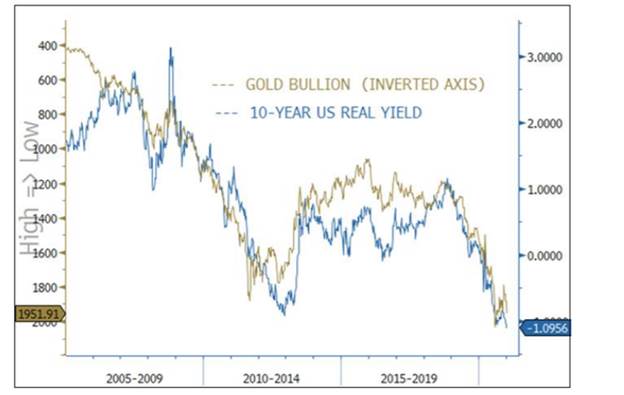 Bond have been a price game certainly since the Great Financial Crisis and yet the pairing remains strong! Going back to those first points I listed…

· I don’t think politics is going to be the straw. Economics will, in some manner similar to how the overleveraged housing market tipped off the Great Financial Crisis. And political safe-haven seekers come and go from gold all the time, like the tides.

· I really don’t think the Fed will let Treasury yields rise much. And if Hoisington is right, they won’t have to worry about it anyway. So the pressure on gold from that bump in real yields won’t persist.

· I don’t know about inflation.

The gold argument still makes a lot of sense. Real rates and real yields support it, now and looking ahead. Diversifying against the irrationality of today’s market supports it. Gold miners making oodles of money and offering some of the strongest balance sheets and dividend yields across equities support it. Inflation would amplify all of these, but it’s not needed.

This is the "metal of the future" says Randy Smallwood