Reddit is trying to fuel the biggest short squeeze in the world..on silver

Oh my silver. There is so much to say about everything going on with Reddit and Robinhood and volatility and market tops and and and…but I will save most of that for Wednesday and keep my comments to silver.

What’s going to happen? Silver price fireworks are a real possibility – but are not guaranteed.

Background: the Reddit crowd that pushed GameStop through the roof to (1) show hedge funds with publicly proclaimed shorts that retail has the power to stop their elitist and money-grubbing attacks on certain stocks or (2) make a pile of cash by getting oodles of retail to just pile into one stock or (3) some combination of the two have now shifted their focus to silver.

It started on Thursday and Friday last week. It made sense in that silver is a reasonably small market and one rife with shorters. In fact, the Reddit crowd turned to silver because its immense shorting market offers potential to create, as the thread declares, “the biggest short squeeze in the world $SLV Silver $25 to $1000.”

Moving the price of silver was actually a second thought. At first, the group looked at stocks. First Majestic Silver (TSX: FR, NYSE: AG) was an early focus, and fair enough as it attracts as much or more shorting as any silver stock out there.

Here’s what that did.

But then they decided to go after the spot price. I commented on this briefly last week I said I didn’t think the Reddit crowd had the power really move the price of silver. I was wrong. 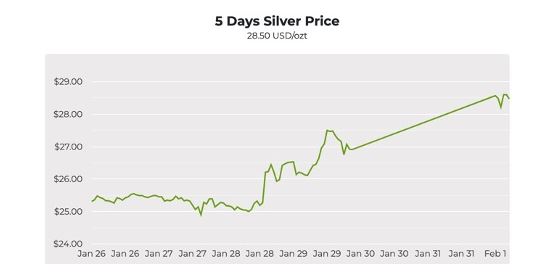 What will happen from here? It’s pretty tough to know.

On the It Will Spike side:

On the No It Won't side:

Only participate if you can be glued to this story. It could run like mad, shooting silver up 5 fold. Or it could fizzle completely. Or it could spike and dive unpredictably.

The easiest exposure is simply First Majestic. It is the most heavily shorted silver stock out there and so will continue to get the most love from Reddit as long as their silver squeeze keeps working.

I don’t think silver juniors will get a lot of love out of this, almost no matter what happens. Even if the silver price goes to the moon, no one expects that it will stay there for any reasonable period of time. So this is first about understanding what the Reddit crowd will target and second about producer leverage. First Majestic is my answer to #1 and Global X Silver Miners ETF (NYSE: SIL) is my answer to #2. I have orders in for both for the open. They are not large orders; they are more about wanting to play a game than about taking any real bet on this craziness!