Yes Virginia, they do ring a bell!

Gold has been trending upward since 2002.  Within this bull market there have been short-term turning points.  This is when gold swings from overbought to oversold, and back again.  The last such turning point occurred in August, when gold became temporarily overbought.  (Charts courtesy  Stockcharts.com unless indicated). 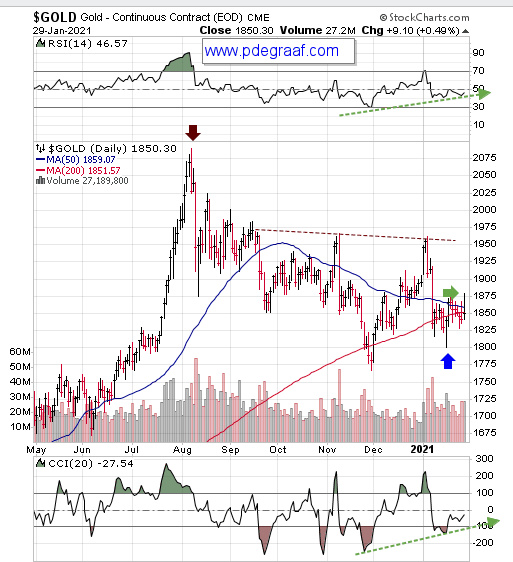 The brown arrow points to a ‘downside reversal’.  This is when price begins the day above the range of the previous days, but runs out of energy and closes below the closing price of the previous day.  For experienced traders this was the ‘ringing of a bell’.

Obviously no one knew at the time how severe a decline this signal predicted, so caution became the watchword.  Since then, there have been two false signals, in November and early January, that gave the appearance of ‘ringing a bell’.  In each case a ‘downside reversal’ ended the rally.        Then on Wednesday January 19th you will notice the ‘ringing of a bell’, (blue arrow), as price produced an ‘upside reversal’, this is when price started the day below the range of the previous day, and closed above the closing price of the previous day.  The next day there was follow-up action, and in the event that price can manage to close above the green arrow, it will confirm a bottom.  The continuation of the bull market will be obvious, once price rises above $1950.00.  The supporting indicators (RSI and CCI) are positive and the 200DMA is rising.

Meanwhile the price of silver has been leading gold higher as we see by this next chart which compares silver to gold.  Historically silver outperforms gold during a precious metals bull market. 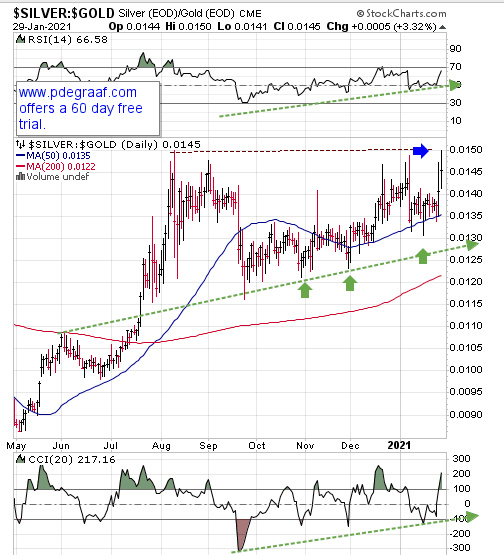 This comparison chart features an Advancing Right Angled Triangle, or ARAT.  The bottoms keep rising as seen by the green arrows, and eventually a breakout at the blue arrow will accelerate the trend as silver continues to outperform gold.  Each of the vertical green arrows represents another ‘bell being rung’. 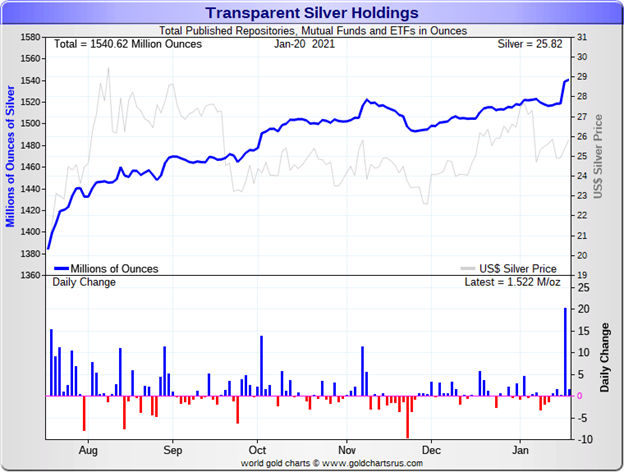 This chart courtesy goldchartsrus.com shows us that investors are piling into silver trusts and ETFs.  This is another ‘bell being rung’. 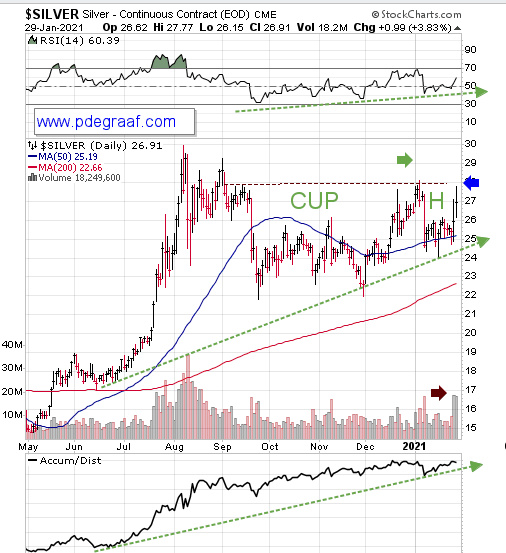 Featured is the silver chart.  The pattern is a ‘cup with handle’ formation.  For technical analysts this in itself is another ‘bell being rung’ - albeit slow and steady.  The supporting indicators are positive, including volume.  A rise above the blue arrow will confirm the pattern and a rise above the green arrow will be very bullish.