The World Gold Council recently published two interesting reports. Gold demand plunged in 2020, but 2021 should be positive for the yellow metal.

On Thursday (January 28), the WGC published its newest report about gold demand trends: Gold Demand Trends Full Year and Q4 2020 . The key message of this publication is that the gold demand of 783.4 tons (excluding over-the-counter activity) in the fourth quarter of 2020 was 28 percent lower year-over-year. As a result, it was the weakest quarter since the midst of the Great Recession in Q2 2008. The weak quarter made the whole year quite disappointing, as the annual gold demand in 2020 dropped by 14 percent to only 3,675.6 tons, making it the lowest level of demand since 2009 .

The main driver of this decline was the COVID-19 pandemic, that triggered the Great Lockdown and the subsequent surge in gold prices. In consequence, jewelry demand plunged 34 percent to 1,411.6 tons, the lowest annual level on record. It shows that – contrary to popular opinion – consumers are price takers, not price setters, in the precious metals market.

So, what is really interesting for me is that the investment demand, the true driver of gold prices, grew 40 percent to a record annual high of 1,773.2 tons . Although there was a slight increase in bar and coin investment, the surge in investment demand was caused mainly by the great inflow into global gold-backed ETFs , whose holdings grew by 877.1 tons last year, a record level.

These inflows were, of course, fueled by the spread of the coronavirus and the fiscal and monetary policies that followed in response. Gold was actually one of the best performing major assets in 2020 amid high uncertainty and low real interest rates . Importantly, there were net outflows from the gold ETFs in the Q4, but they were concentrated in November, so the worst may be behind us.

When it comes to other categories, the central banks added a net 273 tons in 2020, the lowest level since 2010, as some central banks sold gold amid recession to obtain liquidity. It confirms gold’s role as a safe-haven asset and portfolio-diversifier . Indeed, gold had one of the lowest drawdowns during 2020, reducing investors’ losses. The technology demand fell seven percent in the last year to 301.9 tons due to the economic disruptions of the pandemic . Total supply fell four percent to 4,633 tons, the first annual decline since 2017, as the pandemic disrupted mine production.

The WGC’s demand report is, as always, interesting, but it should be taken with a pinch of salt . The reason is that the WGC wrongly defines the demand and supply for gold, narrowing it to the annual supply and its use, and omitting the great bulk of transactions in the gold market. In consequence, the report contradicts simple economic logic. According to the WGC, gold supply fell four percent, while gold demand declined 14 percent – but the average yearly price of gold gained 27 percent (see the chart below)! Whoa, when I learnt economics, the drop in demand (higher than the decrease in supply) was pushing the prices down! 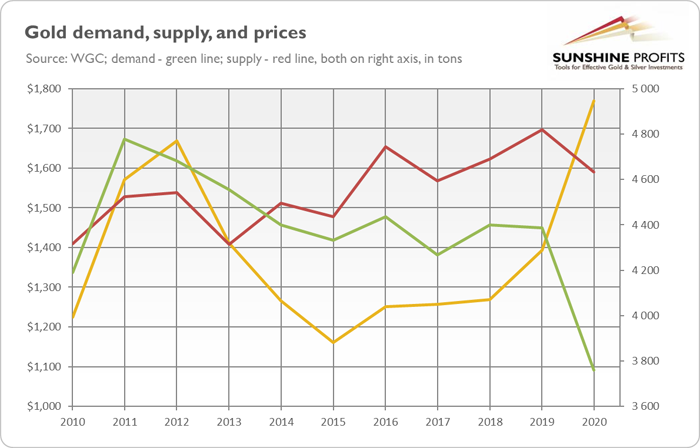 But let’s leave the past and now focus on the future! In January 2021, the WGC also published its gold outlook for the new year . Not surprisingly, the industry organization is generally bullish , but it notices the headwinds as well . According to the WGC, the hope of economic recovery and easy money will increase the risk appetite, creating downward pressure on gold prices.

However, the WGC believes that the low interest rates and potential portfolio risks will support the investment demand for the yellow metal. In particular, ballooning fiscal deficits , the growing money supply and the possibility of higher inflation and the risk of the stock market correction (who knows, maybe the GameStop saga will trigger some broader bearish implications?!) should support gold prices.

The WGC’s conclusion turns out to be similar to my own 2021 outlook for gold: that it could be a positive year for the yellow metal, but less so than 2020 – at least under the condition that the global economy will experience a steady recovery without too much inflationary pressure. But inflation may arrive, ending the era of the Goldilocks economy – and possibly starting the year of gold. Only time will tell!