Correction in stocks almost over while gold is basing

In line with expectations and probabilities, the stock bulls returned, and I closed Friday initiated long position for a solid 40-point gain in S&P 500! All right, but are the bulls as strong as might seem from looking at this week‘s price performance?

Such were my yesterday‘s words:

(…) is this the dreaded sizable correction start, or the general February weakness I warned about a week ago? I‘m still calling for the S&P 500 to be in a bullish uptrend this quarter and next, though I‘m not looking for as spectacular gains as in the 2020 rebound.

That‘s still my call. Fears from the Fed talking taper contours, GameStop and silver squeeze are taking a back seat to the realities of leading economic indicators rising, stimulus coming, and the central bank more than willing to mop it up. Commodities are red hot, leading precious metals, and inflation will rear its ugly head this year for sure. The momentary dollar resilience which I called both preceding Mondays to happen, will give way to much lower values. Twin deficits are a curse.

Such were my observations on gold – please read yesterday‘s extensive analysis. It‘s one of the most important ones written thus far on gold:

(…)  I don‘t see gold plunging to any dramatic number such as $1,700 but given that the dollar looks to have stabilized for now, and may even attempt a modest and brief rally from here, gold may get again under corresponding (and weak) pressure – should the silver squeeze be defeated.

After the margin raise, it is certainly on the defensive now. Yet I see encouraging signs for the new precious metals upleg to emerge (charts courtesy of www.stockcharts.com). 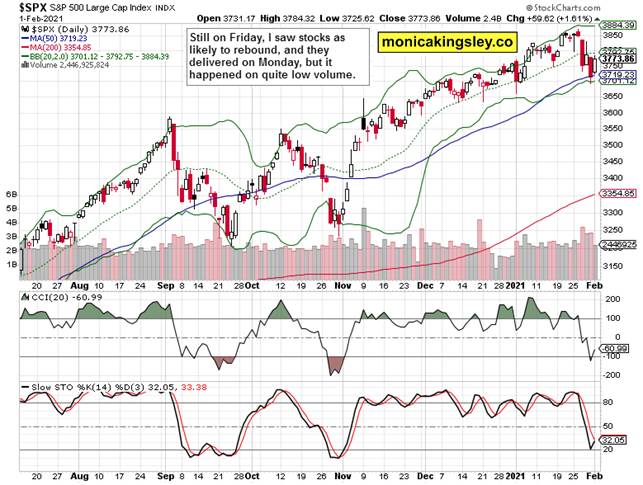 I laid out the case clearly on Friday as to why we‘re witnessing another downswing lacking internal balance. We didn‘t have to wait long for the recovery from options expiry plunge, yet the volume leaves a little to be desired. Wasn‘t weak really, just Monday‘s regular, lower volume. Lower volume days can get challenged. I would prefer to see follow through in price advance coupled with a volume reading I could interpret positively so as to be able to call this correction as fully over. 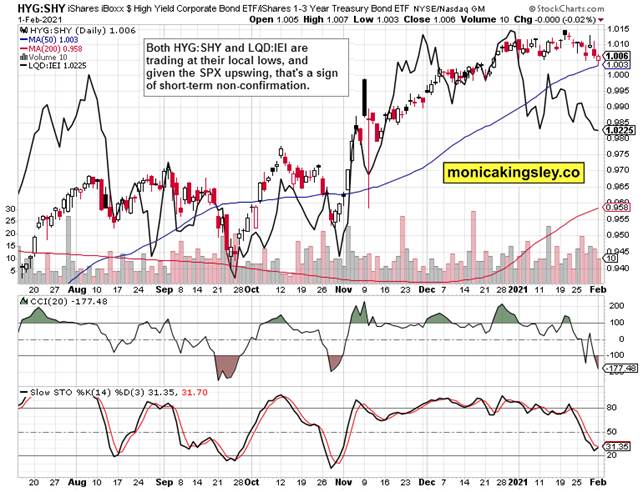 Volatility is still elevated, yet calming down – slowly but surely.That‘s pointing out we‘re in the latter stages of the correction. 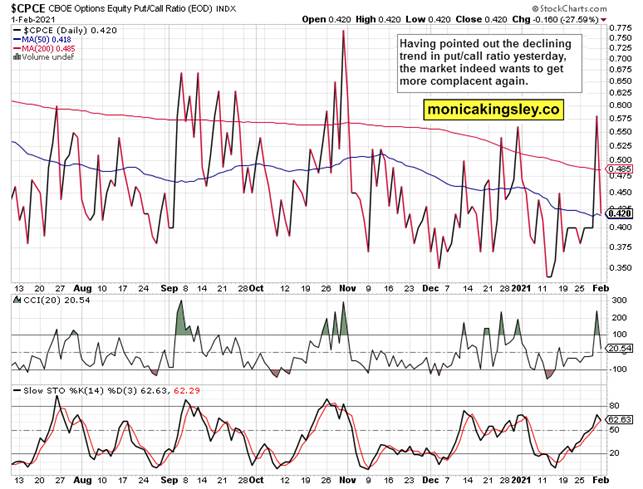 The put/call ratio has retreated again, reflecting my yesterday‘s point that the fear in the markets is in a generally declining trend. Both moving averages are still falling, and the spike didn‘t reach the pre-elections and early September peaks either. Still no change in sentiment, and we‘re well on the preceding path marking further stock market gains. 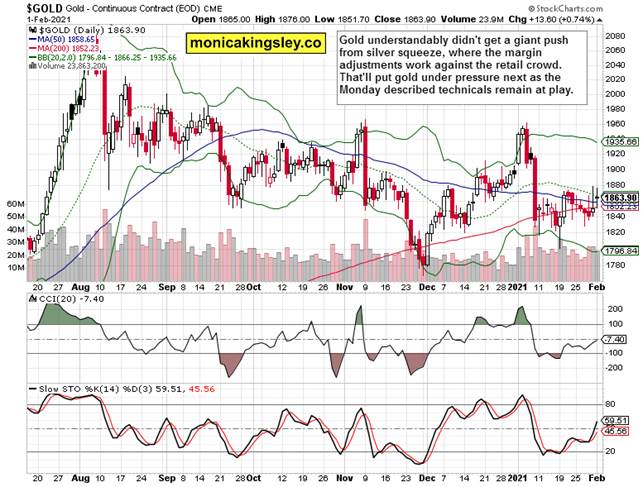 The king of metals is still ill positioned to keep the silver short squeeze gains. Yes, I am not trusting the daily indicators one bit, and look instead at the lower volume and repeated inability to keep intraday gains. 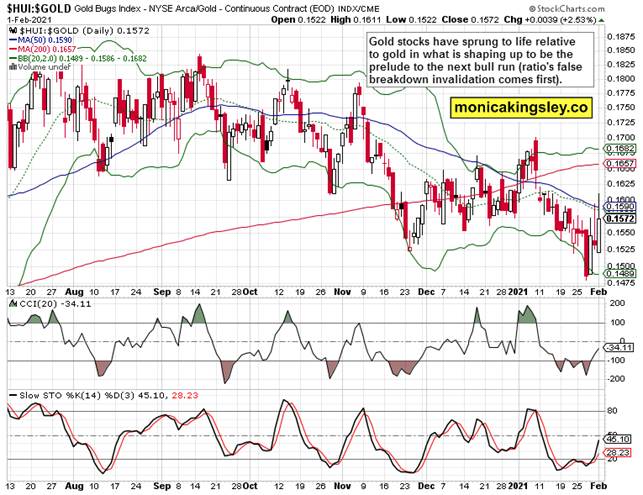 This is the sign of an approaching upleg in the precious metals – miners rebounding relative to gold after preceding breakdown. Should the mining companies keep their relative gains, that would be encouraging for the whole sector. 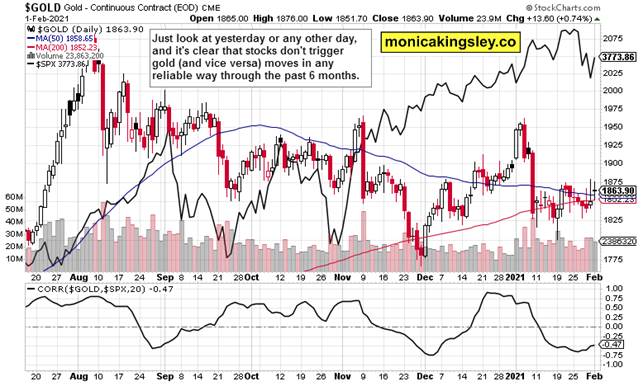 What if the stock market though puts the carefully laid plans to rest? The above chart shows that there has been in recent months no clear relationship either way and interconnectedness of reaction between the two assets. Let‘s stay objective and don‘t succumb to the plunge in stocks fear mongering. 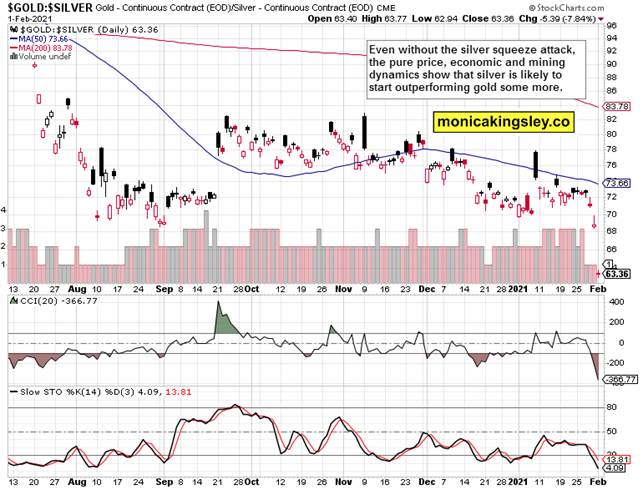 The gold to silver ratio is similarly to the $HUI:$GOLD ratio showing that the tide in precious metals is turning, and the time for the bears is running up. I like the fact that love trade is starting to kick in as opposed to fear trade. Love trade, that means rising preference for gold because the economy is doing better, while fear trade is about hiding in the bunker. 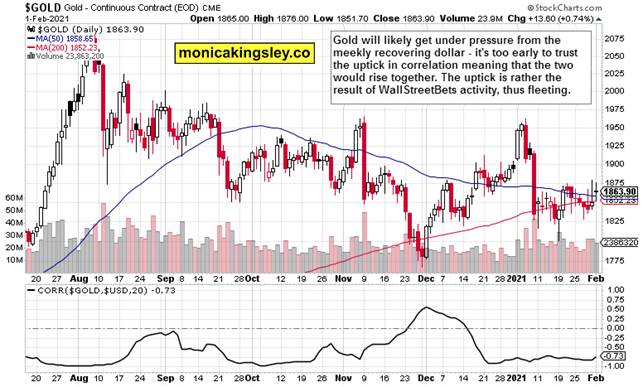 On one hand, gold is vulnerable to rising (long-term Treasury) yields, and it‘s also lagging behind the commodity complex. It‘s also trading with the negative correlation to the dollar, which is set to put up a some fight in the short run again – please see my yesterday‘s extensive gold market analysis bring proof for these assertions as these form the short-term watchouts for the gold bulls.

From the Readers‘ Mailbag

Q: Hi Monica, I wanted to say a big thank you for responding to my question last week which I did find reassuring. Little did we see what a week we would have to follow hey, especially in silver. I know that it has to cross the Rubicon at $30 and hold but I would like to get your observations. Can silver get going now (you thought Spring more likely) I also like platinum and wondered what you see there and finally can gold shuffle of its winter blues sooner rather than later.

A: Always welcome – it‘s common knowledge that I love to engage in discussion with readers and everyone concerned. I called for gold to get going through spring, and now with WallStreetBets, silver has sprung to life. Platinum I see as notoriously lagging behind, and its catalyst demand in a challenged market is one of the fundamental culprits – jewellery demand won‘t save it. Palladium has much better prospects, not to discuss the wild swings in rhodium to get an idea what PGMs can deliver. Gold is still within its basing pattern, and unless it attracts the attention of internet crowd (see my yesterday‘s reply on how to play the silver squeeze), will take its time in breaking higher. Look at the gold-silver ratio – it‘s the white metal‘s turn to deliver stronger returns now, which is in line with the economic recovery underway (silver is an industrial metal, too).

The stock market recovered, and looks set to digest today‘s premarket gains on top of Monday‘s ones, signifying that the correction is in its latter stages. Credit market recovery is a missing piece of the puzzle. Gold though isn‘t out of the woods yet in the short run, but I see its medium-term bullish case getting stronger even as it remains rangebound for now.