It is no secret. I am not a big fan of silver for speculation, investment, or for that matter, as a safe haven and insurance policy in times of financial calamity and/or economic collapse.

I have written, spoken, and presented my views on the so-called “poor man’s gold” ad infinitum over the past 13 years (e.g., Mercenary Musing, October 21, 2019).

Silver bugs are not within my legion of fans. And that is okay since my consistently low-ball price predictions have repeatedly panned out over the years. By always taking the under on future prices, I have never lost an over/under bet with my silver aficionado friends. In fact, I’ve won several silver coins that way.

I do indeed own some silver coins. They are all so shiny and beautiful and will remain pristine if properly stored to prevent tarnish. I also appreciate the value of junk bags of silver, which are pre-1965 US-minted dimes and quarters having a face value of $1000. In theory, they could be used for barter during a societal economic collapse.

But that’s enough pontificating … on to the subject at hand. I intend to show in four charts how the price of silver illustrates a not uncommon way that commodity, monetary, and financial markets behave.

To wit: An exponential rise inevitably begets a parabolic fall.

A tad more than 41 years ago, on January 21, 1980, silver peaked at a record NYMEX close of $49.45 per ounce as the Hunt Brothers tried to gain control of the world’s silver market. There is no need to recap the ensuing debacle as it is well-documented what they did, how they did it, when it failed, and why it failed.

Here’s a two-year chart compiled from our in-house database that shows silver’s exponential rise, sharp spike, and parabolic fall over the course of only five months: 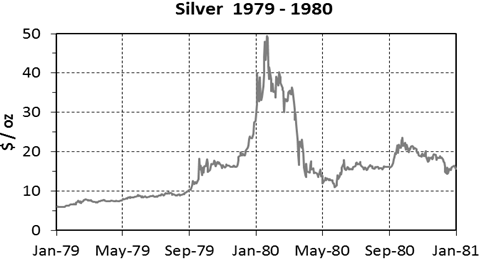 But this was not a unique one-and-done event for silver. The performance was repeated during the run up in hard commodities in 2010 and 2011. Silver peaked at a London pm close of $48.70 on April 28, 2011. This episode was of longer duration with the exponential rise, spike, and parabolic fall taking ten months to play out. Here’s our chart: 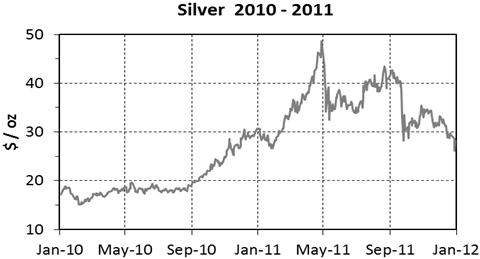 Our current example begins in mid-March 2020 with the worldwide Wuhan pandemic panic. By mid-June, a pattern resembling a positive parabola was complete with the exponential fall followed by a two-step rise. But the pattern did not end there. In a major third step, the exponential rise continued to early August with a typical negative parabolic top in the upper $20s thru early September. Silver then took a steep fall in late September and over the past four months, has traded in the low- to mid-$20 range. 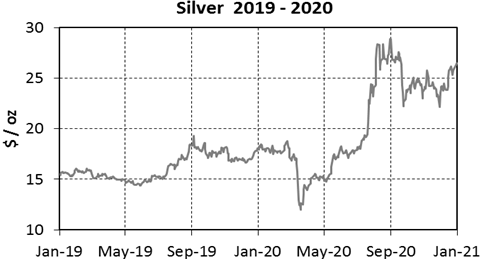 We complete our case on silver with a bird’s-eye view of monthly average prices over 51 years. There have been two major and three minor parabolic patterns since gold was freely-floated on world-exchange traded markets from 1971-1973. 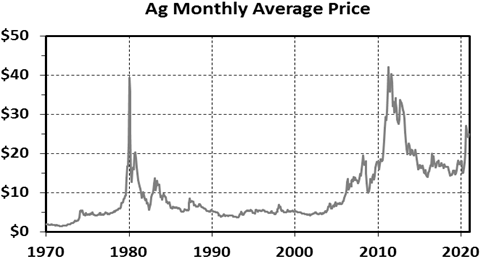 Folks, no matter what the silver bugs may promulgate about a 16:1 or 20:1 gold-silver ratio, rampant market manipulation, and/or conspiratorial depression of prices, silver acts no differently than any other small volume, low liquidity, speculative market that includes derivative components such as futures, options, spread bets, and exchange-traded funds. Silver is further complicated by dual roles as a mainly industrial metal and a part-time precious metal.

Silver prices over the past 51 years simply illustrate the way that capitalistic markets sometimes behave and that is irrationally.