PMs are charging higher as the next upleg approaches

The anticipaded gold rebound is underway, and my open long position is solidly profitable right now.  In line with the case I‘ve been making since the end of January, the tide has turned in the precious metals, and we are in a new bull upleg, which will get quite obvious to and painful for the bears.

Little noted and commented upon, don‘t forget though about my yesterday‘s dollar observations, as these are silently marking the turning point I called for, and we‘re witnessing in precious metals:

(…) The weak non-farm employment data certainly helped, sending the dollar bulls packing. It‘s my view that we‘re on the way to making another dollar top, after which much lower greenback values would follow. Given the currently still prevailing negative correlation between the fiat currency and its shiny nemesis, that would also take the short-term pressure of the monetary metal(s).

What would you expect given the $1.9T stimulus bill, infrastructure plans of similar price tag, and the 2020 debt to GDP oh so solidly over 108%? Inflation is roaring – red hot copper, base metals, corn, soybeans, lumber and oil, and Treasury holders are demanding higher yields especially on the long end (we‘re getting started here too). Apart from the key currency ingredient, I‘ll present today more than a few good reasons for the precious metals bull to come roaring back with vengeance before too long.

Finally, I‘ll bring you an oil market analysis today as well. So, let‘s dive into the charts (all courtesy of www.stockcharts.com). 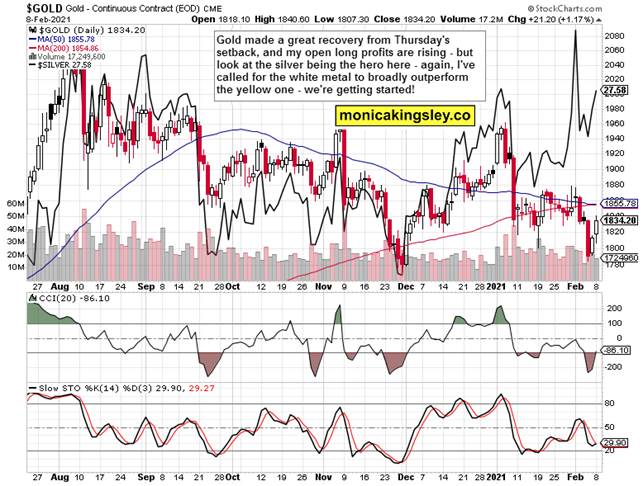 Let‘s overlay the gold chart with silver (black line). The disconnect since the Nov low should be pretty obvious, and interpreted the silver bullish way I‘ve been hammering for weeks already. Please also note that the white metal has been outperforming well before any silver squeeze caught everyone‘s attention. 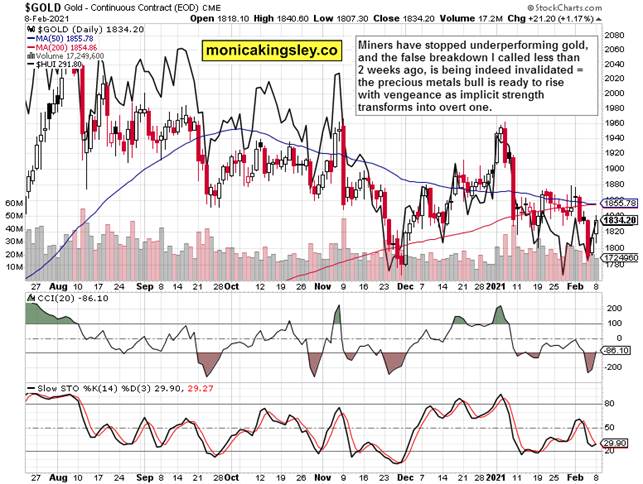 Let‘s go on with gold and the miners (black line). See that end Jan dip I called as fake? Where are we now? Miners are no longer underperforming, and the stage is set for a powerful rise. 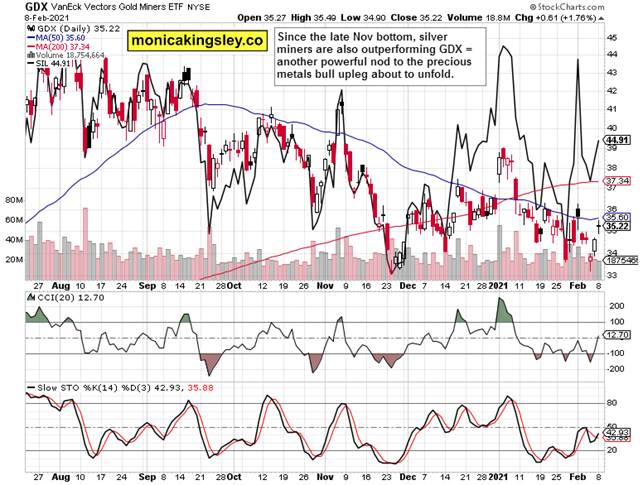 Just check the gold miners to silver miners view to get an idea of how much the white metal‘s universe is leading everything gold. Another powerful testament to the nascent bull upleg in the precious metals. 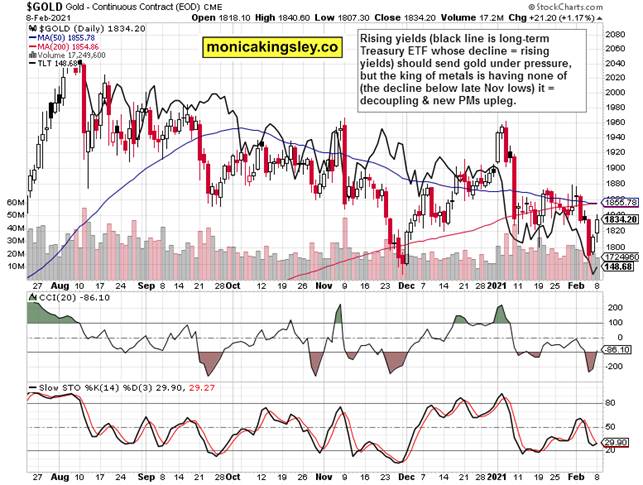 Continuing with gold and long-term Treasuries (black line), we see that the king of metals isn‘t giving in. Instead, it‘s rising in the face plunging Treasuries that are offering higher yields now. No, the yellow metal is decoupling here, as the new precious metals upleg is getting underway. 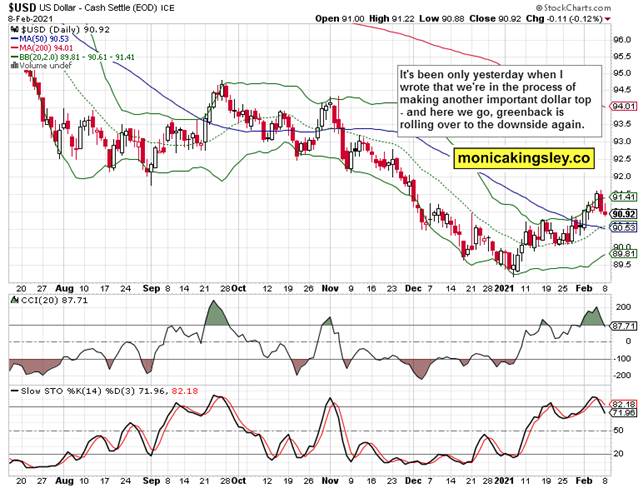 The greenback is the culprit – and again in my yesterday‘s analysis, I called the headwinds it‘s running into. The world reserve currency will indeed get under serious pressure and break down to new lows as the important local top is being made.

From the Readers‘ Mailbag - Oil

Q: "Hi Monica, I am glad I found you after you 'disappeared' from Sunshine Profits! As you had been back then already covering gold and oil at times, I wonder what's your take on black gold right now. A little great birdie told me oil will be the next Tesla for 2021 - what's your take?"

A: I am also happy that you found me too! Thankfully, my „disappearance“ is now history. I‘ll gladly keep commenting, in total freedom, on any question dear readers ask me. Back in autumn 2020, seeing the beaten down XLE, I wrote that energy is ripe for an upside surprise. I was also featuring the fracking ETF (FRAK) back then. Both have risen tremendously, and it‘s my view that the oil sector (let‘s talk $WTIC) is set for strong gains this year, and naturally the next one too. Think $80 per barrel.

Part of the answer is the approach to „dirty“ energy that strangles supply, and diverts resources away from exploitation and exploration. Not to mention pipelines. Did you know that the overwhelming majority of ‚clean‘ energy to charge electric cars, comes from coal? And that the only coal ETF (KOL) which I also used to feature back in autumn, closed shop? Oil is clearly the less problematic energy solution than coal.

These are perfect ingredients for an energy storm to hit the States by mid decade. I offer the following chart to whoever might think that oil is overvalued here. It‘s not – it‘s just like all the other commodities, sensing inflation hitting increasingly more. 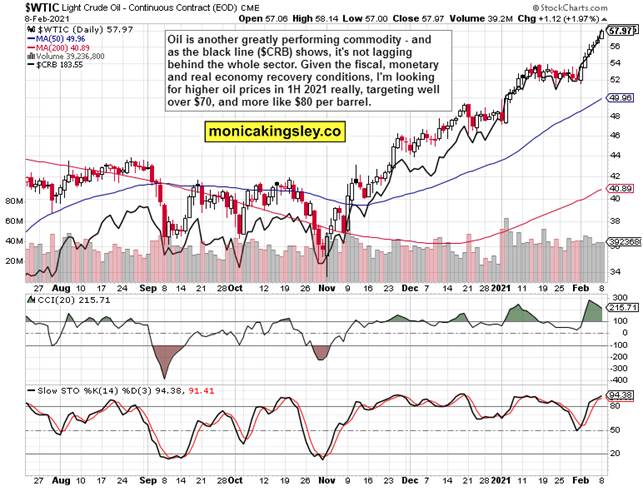 The gold and silver bulls are staging a return, as last week‘s price damage is being repaired. The signs of a precious metals bull, of a new upleg knocking on the door, abound – patience will be rewarded with stellar gains.