Yellen is Treasury Secretary.  Powell is Fed Chair.  And Sanders is head of the Senate Budget Committee.

Most of the time, it’s impossible to tell the future.  But there are exceptions.  Right now, there’s no room left to read between the lines.  The goals, and outcome, are obvious.

America, along with the rest of the world, is going to try and spend its way out of the pandemic crisis.

This crystal ball is perfectly clear, and Wall Street’s been peering into it.  That’s why stocks are near all-time highs.  It’s why, increasingly, the savviest managers from corporate America are also catching on, and acting.

It’s why Tesla just moved $1.5 billion of its cash into bitcoin. Naturally, that’s big news. But what didn’t make the Tesla headlines may surprise you.

It’s time to manage your cash, with gold.

The Dollar is Fizzling

“In January 2021, we updated our investment policy to provide us with more flexibility to further diversify and maximize returns on our cash that is not required to maintain adequate operating liquidity...we may invest a portion of such cash in certain alternative reserve assets including digital assets, gold bullion, gold exchange-traded funds and other assets as specified in the future.” (emphasis mine)

Folks, the writing is now all over the wall.  Corporate America is cluing in, but the vast majority of individual investors haven’t…yet.  It’s why gold, silver, and pretty much all commodities have started to run higher.

The dollar is toast. 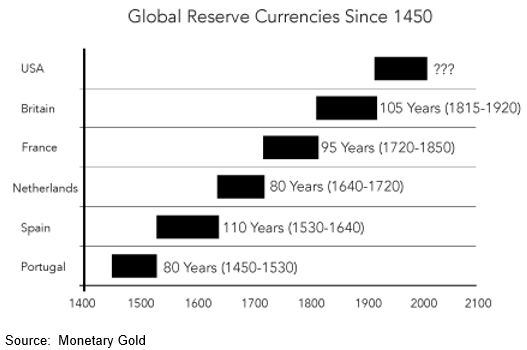 The dollar enjoyed a short reprieve over the last decade or so, but central bank and government reaction worldwide to the Covid-19 crisis was the final straw.  The camel’s back is now broken.

“…a series of equal and opposite reactions are occurring as nations move to remove the role of the U.S. dollar at the center of global trade and finance.  This will have long-lasting structural impact in ending the dominance of the dollar as the world’s reserve currency.” 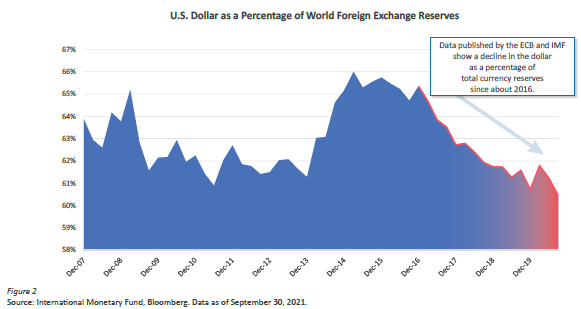 The action in the US dollar index over the past few years tells a similar story. 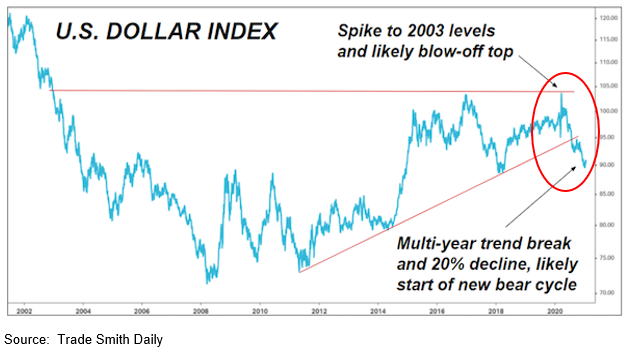 The dollar has clearly broken down below a rising trend line after peaking near 105 last March.  Today, it’s trading near 90.  By all accounts, it appears the dollar has resumed its long-term downtrend.

“It’s possible, in fact probable, that all this stimulus is still going to be in place and frankly increasing just when we release the biggest increase in pent up demand globally that we’ve had maybe since the 1920s, which could make the world look extremely different than today…I would say that my overriding theme is inflation relative to what the policy makers think.”

That makes gold a go-to option not only to preserve, but to grow your cash.

The Future is Golden

2020 was challenging for everyone, including gold miners.

Annual gold mine production actually dropped about 3% last year, from 3,300 tonnes to 3,200 tonnes, as miners were forced to temporarily shut down their facilities. 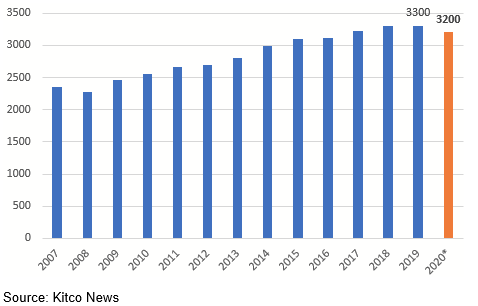 Still, most analysts expect gold output to grow over the next decade.  A report by Fitch Solutions forecasts about 2.5% annual gold production growth between 2020 and 2029, led by Russia which would overtake China as the largest producer by then.  But it’s worth noting Russia’s drive to grow its gold output is in order to increase its central bank holdings as a buffer against ongoing U.S. sanctions and risks of Russian banks being excluded from dealing in dollar-denominated assets.  So a lot of Russia’s production may never reach market.  (Source: The Northern Miner, Sept. 1, 2020)

Going all the way back to the mid-1970s, gold has not only kept pace, but surpassed global M2 money supply growth.

Overall, I expect demand drivers to hold up.  According to the World Gold Council, central banks are set to remain net buyers again this year.  In my view, financial and geopolitical uncertainty, near-zero or negative rates, historic levels of fiscal and monetary stimulus, and massive pent-up demand as pandemic effects subside mean gold is primed to outperform.

The dollar has resumed its long-term downtrend, as investors are beginning to realize it’s about to be printed into oblivion.  You need to take steps now that will help you protect your cash and purchasing power.  And that means prioritizing precious metals and commodities.

In the Gold Resource Investor newsletter, I provide my outlook on which gold stocks offer the best prospects as this bull market progresses. I recently added two companies to the portfolio, which I believe have exceptional potential to double or better in the next 12 months.

In the end, it’s not just me saying gold’s a necessary reserve asset.