Searching for a local bottom in gold

Gold‘s hardship is another cup of tea, standing in stark comparison to how well silver and platinum are doing. At the same time, the dollar hasn‘t really moved to the upside – there is no dollar breakout. If the greenback were to break to the upside, that would mean a dollar bull market, which I don't view as a proposition fittingly describing the reality – I called the topping dollar earlier this week. The world reserve currency will remain on the defensive this year, and we saw not a retest, but a local top.

This has powerful implications for the precious metals, where the only question is whether we get a weak corrective move to the downside still, or whether we can base in a narrow range, followed by another upleg (think spring). February isn't the strongest month for precious metals seasonally, true, but it isn't a disaster either. As has been the case throughout the week, I‘ll update and present the evidence of internal sectoral strength also today.

One more note concerning the markets – in our print-and-spend-happy world, where the give or take $1.9T stimulus will sooner or later come in one way or another, we better prepare on repricing downside risk in the precious metals, and also better not to fixate on the premature bubble pop talk too closely. I have been stating repeatedly that things have to get really ridiculous first, and this just doesn‘t qualify yet in my view. All those serious correction calls have to wait – in tech and elsewhere, for we‘re going higher overall – like it or not.

Let‘s get right into the charts (all courtesy of www.stockcharts.com). 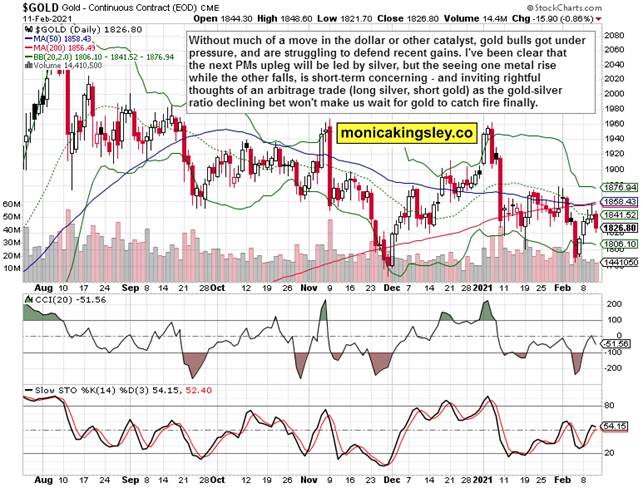 Under pressure right as we speak ($1,815), the yellow metal‘s technical outlook hasn‘t flipped bearish. Should we get to last Thursday‘s lows, it would happen on daily indicators ready to flash a bullish divergence once prices stabilize. But for all the intense bearish talk, we haven‘t broken below the late Nov lows.

For those inclined so, I am raising the arbitrage trade possibility. Long silver, short gold would be consistent with my prior assessment of the gold-silver ratio going down. Similarly to bullish gold bets, that‘s a longer-term trade, which however wouldn‘t likely take much patience to unfold and stick. 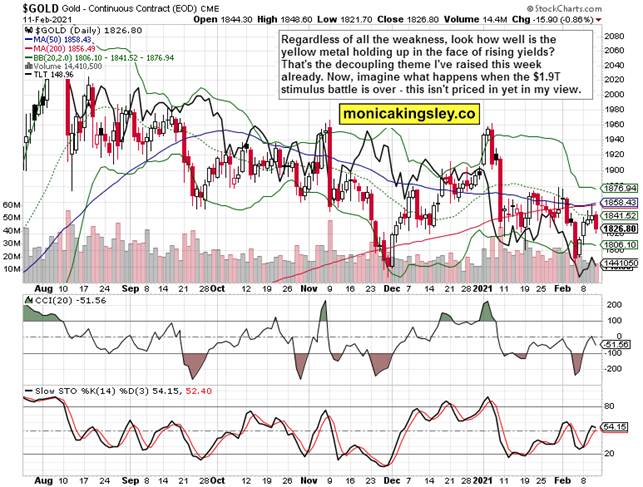 A bullish chart showing that gold isn‘t following the rising yields all that closely these days. Decoupling from the Treasury yields is a positive sign for the sector, and exactly what you would expect given the (commodity) inflation and twin deficits biting. 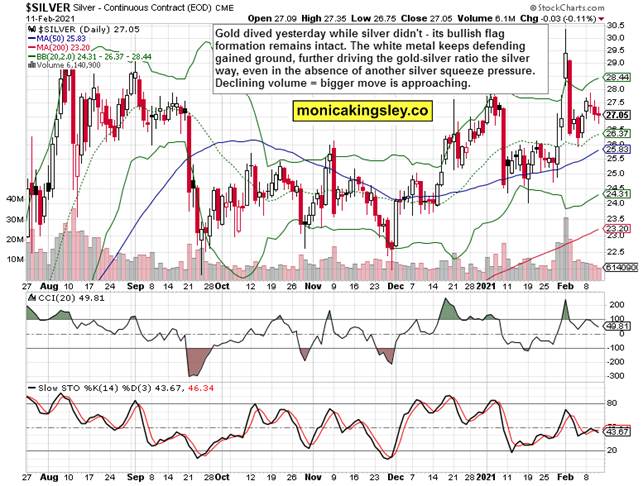 Silver continues to trade in its bullish consolidation, and unlike in gold, its short-term bullish flag formation remains intact. The path of least resistance for the white metal remains higher. 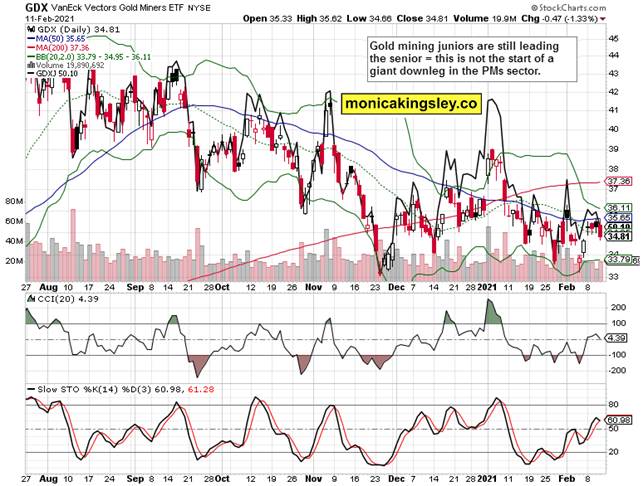 The gold bulls find it harder to defend their gains, unlike the silver ones. That‘s the short-term objective situation, regardless of expansive monetary and fiscal policies, real economy recovery, returning inflation and declining U.S. dollar. The new upleg keeps knocking on the door, and patience will be richly rewarded.