Despite relatively stable consumer demand for diamonds in established markets like the U.S. and notable growth from newer markets like China, for the most of last decade the diamond industry has felt apathetic. This can in part be explained by an arguably oversupplied supply-chain, insufficient marketing efforts and a general pessimism towards the diamond business as a changing consumer economy challenges traditional industries.

That said, as of late, the diamond industry has been acknowledging these challenges, in some areas more proactively than others, with various macro as well as more micro initiatives. Perhaps serendipitously, the events of 2020 seemed to pressure the industry to take a more accelerated approach to many of these initiatives, five of which are more pronounced in my opinion. These are briefly analyzed below:

I would love to see the diamond industry be a leader in the area of sustainability. Apart from simply being the right thing to do for future generations, from strictly a business standpoint, I think a robust approach to sustainably is actually a necessity for the industry given that diamonds are discretionary item that appeal to consumers emotions –simply put, the product has to have a positive connotation with people and make consumers feel good.

In terms of mining, the diamond industry is uniquely positioned given that most diamonds are found in kimberlite rock. Kimberlite is classified as an ultramafic rock that has a unique property that allows it to naturally absorb very high concentrations of CO2 (note: ultramafic rocks only represent a low-single digit percentage of accessible rocks on the planet).

I think this is one of the most exciting developments in sustainability, not just for the diamond mining industry but for the larger mining industry as a whole, as this process of “mineral carbonation” could result in not only carbon neutral mining but net-negative carbon mining. De Beers has been co-developing this technology for about five years now along with other sustainable mining technologies like hydrogen powered mining fleets –which is being spearheaded by De Beers’ parent Anglo American (LSE: AAL). 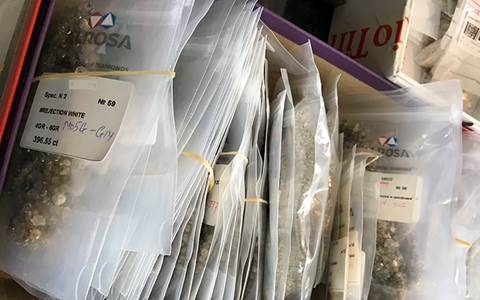 In the coming years when a customer buys a diamond I think they will be provided with the source provenance of the diamond (i.e. the country where the diamond was mined or even the specific mine) in addition to the traditional quality characteristics provided with a grading report. Diamond provenance initiatives have become a priority in the industry, boosted by the availability of new technologies that makes verifiable tracking of a diamond through the (sometimes convoluted) supply chain a reality.

At first, source provenance will likely only be available with larger, center-stone-quality diamonds, however, I think eventually the supply-chain could adapt to allow traceability of smaller goods as well. Tiffany & Co. (now private), the largest jeweler in the world by valuation, is already providing “geographical sourcing information” on all diamonds 0.18-carats larger.

Providing customers with the original source of a diamond increases its “story telling” appeal but also communicates that it is a real, natural diamond that is conflict-free. In the past, most customers have been reluctant to pay a significant premium for a diamond with a source provenance, as has been seen with Canadian-branded diamond campaigns, however, in the near future, I think most consumers, especially in developed regions of the world, will simply demand source information.

An oversupplied market was arguably the greatest plague to the diamond industry for most of the last decade. Too much upstream supply (i.e. from the miners), which was in part prompted by record-high diamond prices in the early-2010’s, along with over-speculation by some mid-stream participants (i.e. the manufacturers), led to more supply than the industry could handle over the given period of time. 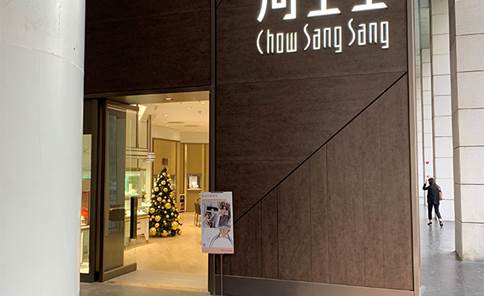 However, it now appears that greater business discipline has begun to take hold as both the upstream and mid-stream segments of the industry have shown to be practicing more supply restraint in recent quarters. A trend of industry inventory deleveraging that begun to take hold pre-2020, was further accelerated by the pandemic. The major miners have reduced production guidance and have provided unprecedented flexibility with their contracted rough diamond buyers. Further, De Beers has recently taken structural steps to more efficiently allocate rough to its buyers which should keep supply in the hands of the strongest players, those that can profitably add-value to it.

In addition, external forces are reshaping the way that the midstream segment of the industry operates; for example, there has been a trend of reduced (relative) credit availability to manufactures after multiple years of apathetic income –which has forced more conservative buying practices. Also, the midstream industry itself has also taken measured action to encourage more conservative practices which was seen following the onset of the pandemic. For example, Indian diamond manufacturing trade organizations called for a voluntary import ban on rough diamonds last year in an effort to sustain manageable levels of inventory aimed at supporting polished prices and preserving the creditworthiness of the industry.

2020 reiterated the strength and resilience of the Chinese consumer market for diamonds. Despite lockdowns and economic uncertainty, Chinese demand for diamonds has continued to surprise to the upside. Multiple major jewelers have indicated high double-digit sales growth in the Mainland in recent quarters.

Boosted by evidently consistent wealth creation and a budding middle and upper-middle class with a penchant for lux, China has shown to be a consistent driving force for diamond demand; whereas growth in more developed Western markets seemingly remains more sensitive to volatile economic conditions and changing consumer buying patterns. As a proxy, Greater China’s largest gem-set jeweler, Chow Tai Fook (HK: 1929), has continued to open net new stores at an impressive pace –the company even opened new stores during the pandemic. Whilst, the U.S.’s largest jeweler by store count, Signet (NYSE: SIG), has closed hundreds of stores in recent years as the company restructures (see figure below). 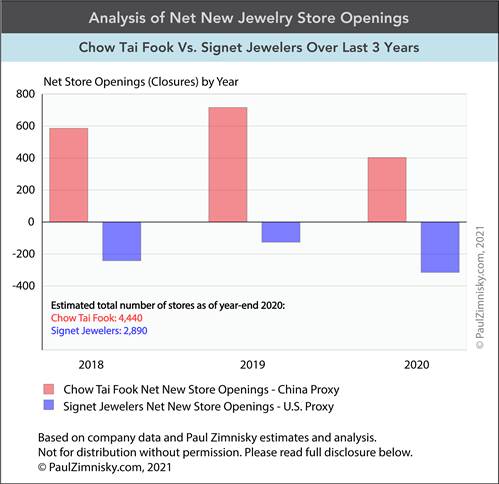 The global pandemic-related lockdowns showed us that jewelers with reliable eCommerce functionality were not only able to withstand weeks and months of brick-and-mortar closures, but in some cases actually thrive by taking market share from non-eComm equipped competitors. The lockdowns also showed us that a significant number of consumers are willing to buy expensive diamond jewelry over the internet without actually seeing and feeling it in person.

Further, the jewelry industry is showing to be a leader in consumer goods marketing innovation. For example, Chow Tai Fook has embraced “live streaming” using social media and other digital platforms with celebrities and influencers to discuss and generate interest in products via real-time streaming video. In April of last year, in the midst of the pandemic, a company representative told me that live streaming events with top KOL’s (“key opinion leaders,” i.e. influencers) were generating almost 10 million views a month on average.

While the diamond industry has certainly had its share of up and downs in recent years (which has felt like more downs than ups), it has shown time and time again to be a very resilient industry, even in times of crisis. Jewelry, and diamonds specifically, continue to resonate with consumers on an increasingly global basis while industry participants have time and again shown to be a committed group, loyal to keeping the industry alive and relevant.