Make gold your stash before the S&P crash

Most of you are seasoned enough to remember weathering (else you're likely not around anymore) the "Black Swan Financial Crisis" of 2008-2009. And when old Swannee flew, all of our BEGOS Markets (Bond / Euro / Gold / Oil / S&P) were initially flushed down the loo, of which mildly (by comparison) were two -- the Bond and Gold -- as we graphically review: 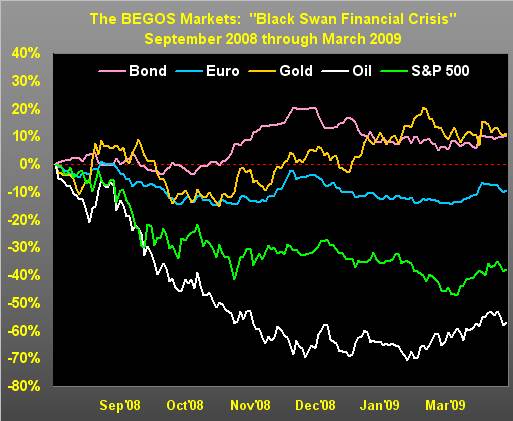 The above seven-month stint from the beginning of September 2008 through the end of March 2009 found the S&P 500 (closing price basis) down as much as 47%, (and moreover Oil down as much as 71%). Yes Gold suffered, but relatively less so in falling 15%, whilst the Bond's loss was at most just 4%.

However: come the end of that carnage-filled run, Gold was firmest +11% whilst the S&P was still -39% with many an investor especially at the retail level having been capitulatively smashed in the process. Chances are you know of some who were, indeed may have been one yourself, (congrats thus being in order if you're still around).

Yet now our notion is "Here We Go Again". And as dumb-downed amongst financial writers as has become the word "crash", we are measuredly cautious to ever to use it in a missive's title. Across the dozen years of The Gold Update, only twice have we so done: once as a suggestive query during November 2013 and once during the "Gentlemen's Crash" of late summer 2015. That's it.

Even more exasperating given the bazillion reasons for the S&P 500 to imminently crash, the fact that it hasn't means it shan't ... you veteran traders know exactly what we mean by that. (Or in chiding a trading colleague this past week, "The instant you go Long the S&P, 'twill be over.")

But indeed, why crash, whatsoever? So sophomorically silly is such notion. After all:

¦ The Biden vaccine shall have us all made right just in time for summer, ("shushhh ... post-vaccination shall nonetheless mandate masks, indeed double-masks, and social distancing for many months");

¦ The S&P's uptrend is our friend ("shushhh ... the market is textbook 'extremely overbought', its recent moneyflow comprehensively unsupportive, and the honest, live price/earnings ratio of the S&P is 75.2x");

Toward true worthiness, let's turn to Gold's weekly bars wherein we now below see six weeks (weaks?) of blue parabolic Long dots having been recorded ... but with price at best treading water. Those six rightmost dots encompass 2021 so far, and yet Gold's settling yesterday (Friday) at 1825 marked only the second up week of the year. 1786 becomes the price above which to stay in the ensuing week, else the parabolic trend shall flip to Short. That is 39 points of wiggle room with Gold's expected daily trading range of 27 points and on the weekly basis 70 points. But upon an S&P fall, a Gold advance to at least the rising dashed trendline at 1953 is a reasonable call:

As to the Economic Barometer, "The Biden Effect" appears to have run its honeymoon. Reports for the Baro this past week were poor, notably February's University of Michigan Sentiment Survey sporting its third-worst drop in 10 months, January's core retail inflation going flat but the Treasury's deficit ballooning, and December's Wholesale Inventories backing up. But: 'tis all a-OK as the S&P 500 now sits at an all-time high (3935). (Yet is it finally from here that it says "Bye-Bye?")...

Specific to the price of Gold as broadly supported by the ever-burgeoning 3Ds of Debasement, Debt and Derivatives, the following near-term view may not appeal, save to those seeking a buyer's deal. Given the value of Gold by Dollar debasement alone per the opening Scoreboard at 3686, we again recall the late great Richard Russell's premise that "There is never a bad time to buy Gold." (To which Inspecteur Clouseau would quip: "And this is it!" --[The Return of the Pink Panther, UA, '75]). Still on the left, the recent stance of the daily bars from three months ago-to-date appears fragile, and on the right in the 10-day Market Profile, price's last bastion of near-term volume support shows at 1813, the hump over which to swiftly climb being 1839-1843: 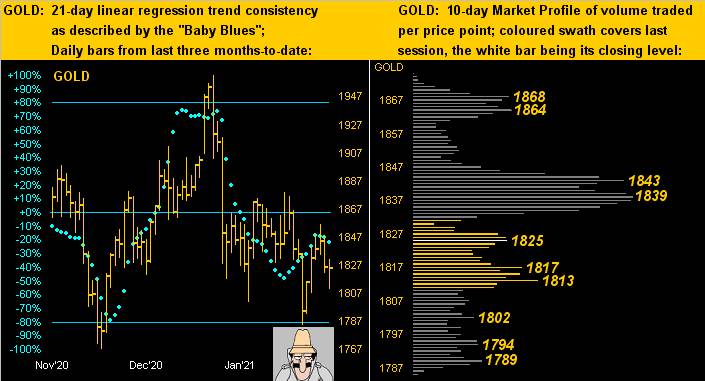 Sister Silver's like graphic appears a bit firmer, her daily bars (below left) essentially in an uptrend, although her "Baby Blues" of the trend's consistency are anything but; and her key line in the sand per her Profile (below right) still starkly shows at 27.00:

So, Hamlet: "To crash, or not to crash; that is the question." 'Twould be noble for the S&P to so do for some return to sensible valuation. But: the market never being wrong, 'tis what 'tis. Yet, the expanding amount of email traffic calling for at least a multi-hundred-point pullback in the S&P is palpable. 'Tis the trader's toil to determine if 'tis probable.

Either way, the daily newsflow is at the very least rife with eye-rolling entertainment. Here are our three Goofball Headlines of the Week just past:

This is to where we've arrived, folks. Be it the "Look Ma, No Earnings!" Crash, the "Dissemination of Misinformation" Crash, or merely the "No One Knows What the Hell to Do" Crash, something has to give, for 'tis what markets inevitably do. And the catalyst may simply be which investment bank is the first to blink: we've witnessed historically wherein one of them announces reduction of client equity exposure, and the market then goes over the cliff. (And this time, 'tis one heckova cliff...)

Add to that next week's streak of 16 incoming Econ Baro metrics and either way it all goes, 'tis best for the Long run (intended pun) to hang onto your Gold, indeed make it your stash before the S&P crash! 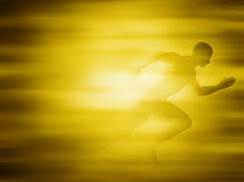