One of the most common objections to allocating wealth to gold is that “it doesn’t pay interest.” At the same time, the attractiveness of an asset that can’t be inflated away by government fiat is obvious. This is why the most powerful driver of gold prices over the last 50 years has been real interest rates in the US. 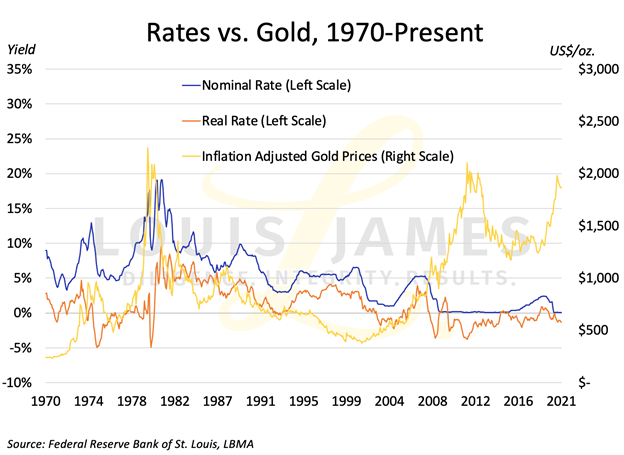 Why real US rates?

But nominal rates don’t account for inflation. A nominal 1% interest rate is actually negative if inflation is 2%. This is why gold and nominal rates can rise together during times of higher inflation.

At the same time, gold is also a monetary metal. It’s a form of physical wealth that competes with the USD directly as money. That can cause both gold and the USD to rally together when economic uncertainty prompts people to seek the safety of cash.

That’s why we can’t look at just the relative strength of the USD in foreign exchange markets to explain gold prices.

There are other complicating factors, like moments of great systemic risk or geopolitical stress (collapses and wars), so there’s no single factor that accounts perfectly for gold prices. But if we look at real rates and real, inflation-adjusted gold prices, we find a very strong inverse relationship. This can be seen more clearly if we zoom in from the long-term chart above to the last 10 years. 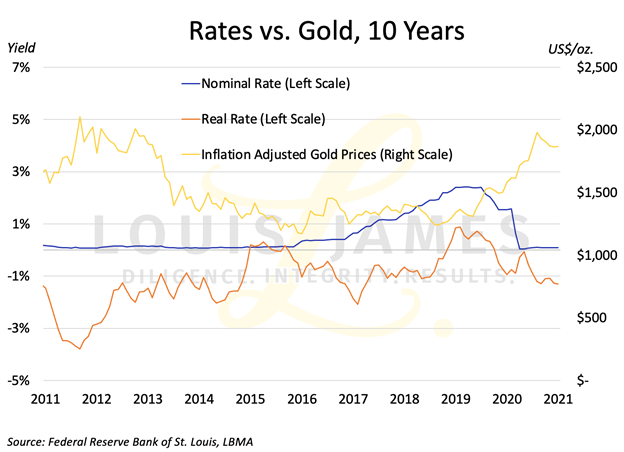 On this scale, nominal rates are almost irrelevant, but real rates have a powerfully inverse correlation with real gold prices.

That’s good to know, but as a gold stock speculator, what I really want to know is the likely trajectory of gold prices going forward.

To help us estimate that, let’s zoom in again and look at gold and rates over the last year. 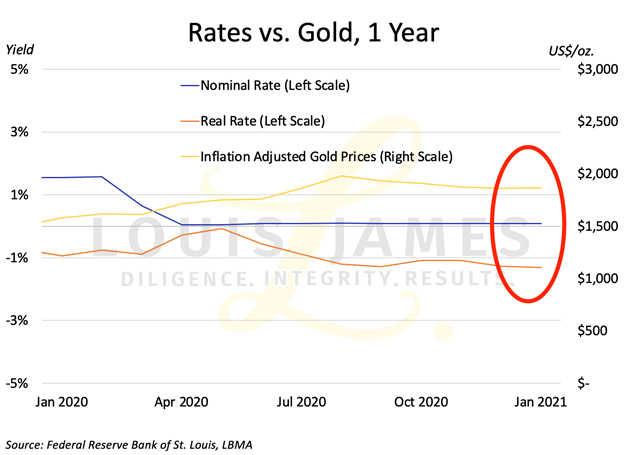 It’s interesting to note that real rates and gold rose together after the crash last March. That’s because CPI inflation fell sharply while nominal rates were held constant—but safe-haven demand drove a lot of money into gold without regard for real rates. No great surprise during exceptional times.

More important for my speculative investment decisions for 2021 is that—as you can see on the right-hand side of the chart—real rates are drifting lower and gold prices have rallied again.

This brings us to the critical question: What will real rates do in 2021?

We already know that the Fed has said that it will keep nominal rates nailed to the floor for years. That makes inflation the key variable, as it will determine the trajectory of real rates while nominal rates remain flat.

Even the official CPI is starting to creep up.

Better yet (for gold) is that the Fed not only says it will let inflation run hot for some time, it also won’t see a post-COVID-19 surge in inflation this summer as real and requiring response.

A dramatic decline in real rates this year seems highly probable, and that makes me very bullish on gold.

Silver as well, of course, but silver also has surging industrial demand going for it, so it could have a great year even if I’m completely wrong about real rates.

But wait a minute—haven’t rates been rising over the last month? Isn’t that what knocked gold back below $1,800 recently?

Yes, but remember that the Fed does not—currently—try to control all bond yields (rates). The Fed funds rate hasn’t changed. It’s interest on long bonds that have been rising. The benchmark 10-year T-bill, in particular, is up sharply. People around the world are waking up to the threat of much higher inflation I’ve been warning about since the monetary and fiscal floodgates were jammed wide open last year.

This is “steepening of the yield curve,” presenting the Fed with a serious problem.

They want to keep rates low to help the economy recover. Everything the Fed has said for years, if not decades, makes it clear that maximizing employment is the higher priority of the Fed’s two goals under its dual mandate (full employment and stable prices).

Key Point: higher bond yields draw capital away from the stock market and tend to slow economic growth—the opposite of what the Fed wants.

If you’ve been reading my work for any length of time, you know I avoid making big bold predictions about the future. In the current situation, however, I just don’t see any way the Fed can avoid intervening in the longer end of the bond market. Some form of “yield curve control” looks baked in the cake.

And how does the Fed control rates? It can’t just set them by fiat. There’s no rate machine on which a dial can be set to a desired number. What the Fed does is enter into the market itself as a participant. It sells bonds to drop their prices and hence increase yields. Or it buys them to push yields down.

In this case, a massive amount of long-bond buying by the Fed could push their yields down, overpowering the market’s natural response to higher inflation, flattening the yield curve…

But where does the Fed get the money to do that?

It creates it out of thin air.

For that, there is a machine. Well, it’s a database now… far more efficient than having to crank up actual printing presses and pay for paper and ink.

I’m not calling for hyperinflation—though that is possible if the Fed loses control of the situation.

I am highly confident that we’re going to see much higher inflation ahead—even if the economy continues struggling and unemployment remains high.

That means real rates will remain low for years, which is very bullish for gold and silver.

Not only that, but real rates are likely to drop sharply this summer as the post-COVID-19 surge sweeps the world. It remains to be seen if investors will discount this dramatic change in real rates as “not real,” as the Fed says it will do. If not, the response to the strong directional change on real rates should drive gold prices much higher by the end of this year.

Lower real rates would boost other commodities as well, but it’s especially and specifically bullish for gold, which is the world’s longest-serving form of wealth preservation.

I expect silver to do even better. It has not yet risen as much as gold and it always outperforms gold by the end of a monetary-metals bull market.

What about Bitcoin and other cryptos? As long as people see them as money, expectations of high inflation could boost them as well. This could change suddenly if cryptos are criminalized—or simply hit by a major panic.

Bottom Line: I think it’s a mistake for traders and investors to see higher long-bond yields as bearish for monetary metals—and that’s an opportunity for those who see the error.

I should remind readers that I don’t speculate on gold and silver bullion. I buy physical bullion as my preferred form of savings. This is prudence backed by thousands of years of history.

As a speculator with cash to deploy in search of large capital gains, it’s the very best gold and silver stocks I’m looking to buy (more of).