Many don’t realize, but silver is considered to have been the first metal to serve as currency.

Could silver one day regain its role as money?  Perhaps. It’s widely accepted that gold was used as money by Lydian merchants around 550 BC, roughly 2500 years ago.

But even before that was silver, more than 4,000 years ago in ancient Greece.  At the time, silver ingots were used as payment in transactions of trade.  Back when Athens oversaw an empire, its silver coin was the tetradrachm.

But for now silver’s fastest growing demand segment, by far, is investment.  In fact, it’s exploding.

Although the #Silversqueeze movement has faded somewhat from the headlines, its effect has been dramatic and persistent.  Bullion dealers continue to struggle to meet physical demand, with most still charging 50% premiums or more.

And that’s likely to continue leading to much, much higher silver prices ahead.

But there’s one option you can follow to buy silver for as little as a 0.5% premium, or perhaps even at a discount to the spot price.  It’s not perfect, but it could make for an attractive silver investment option.

The tetradrachm is considered the first coin to attain “international standard” status, as it was used in trade across the Mediterranean.  Today, of course, silver is no longer used as money in daily transactions.  But for many, it still retains monetary characteristics and value.

In my view, there’s a reasonable possibility that silver may once again regain its role as money in the years to come.  For now, the closest thing is silver’s booming investment demand; it’s been off the charts.  There’s no doubt that the advent of silver ETFs has facilitated (or exacerbated, you choose) this phenomenon. 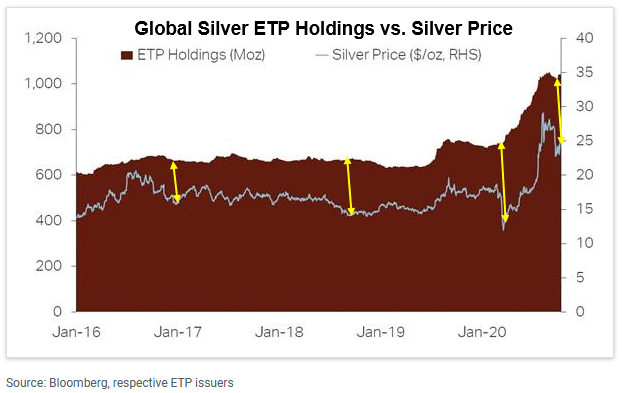 It’s certainly clear from the above chart that silver ETF investments tend to be what’s called “sticky money”.  That means when investors buy, they tend to hold, even through price drops and even through significant ones.  I’ve highlighted this phenomenon with yellow arrows in the above chart.  Even as silver prices sold off several times since 2016, silver ETF holdings remained rather stable.  The most dramatic example of this was last March when silver plunged temporarily to $12, while ETF holdings barely budged.

The Silver Institute confirms outsized, and growing, investment demand for silver.  In a recent note, the Institute highlighted, “…global holdings in ETPs grew by an impressive 331 Moz to end 2020 at 1.04 billion ounces, and since then, global ETP holdings have continued to escalate. Through February 3, ETP holdings rose 137.6 Moz to a new record level of 1.18 billion ounces.”

Consider that total annual supply in the silver market is about 1 billion ounces.  So worldwide holdings in silver ETFs now surpass an entire year’s supply.  And in my view, that’s likely to continue growing as interest remains elevated.  Here’s a little bit of anecdotal evidence.  The following Google Trends chart for the search term “buying silver” supports this idea.

Although the recent massive spike has subsided, it appears to be on the rise again.  Per the Silver Institute, “Further upside is expected this year for physical investment, which is anticipated to rise to a six-year high of 257 Moz…This projection reflects current demand in the all-important U.S. market, which has enjoyed a robust start to 2021, with overwhelming demand causing product shortages.”

So with such outsized silver demand, investors who want the real thing have few options but to pay wild premiums and to wait out long deliveries, at least until things return to normal.

But there’s one option that could help you bridge this gap.

A Workaround for Huge Silver Premiums

Investors can purchase a silver ETF now in order to gain exposure to silver prices.  It’s an alternative while they wait for premiums to return to more normal levels.

The Sprott Physical Silver Trust (TSX:PSLV; NYSE:PLSV) is a great option, but I do want to point out that this is not the same as owning physical silver coins or bars.  PSLV is a claim on silver through the ownership of trust units, which are convenient exchange-traded shares.

That said, Sprott is one of the most recognized names in precious metals and resource investment management.  PSLV does offer advantages over some of its competitors.  The silver it owns is fully allocated, meaning it cannot be loaned out or claimed by another entity.  Unitholders have the option to redeem their units for physical silver bullion, however the minimum requirements are quite high.  There are potential tax advantages for certain non-corporate U.S. investors, where capital gains may be taxed at a lower rate than for most other precious metals ETFs, coins and bars.  Storage of the metals is at the Royal Canadian Mint, which is a Federal Crown Corporation of the Government of Canada.  PSLV has almost $2.5 billion in assets and an annual management expense ratio near 0.67%.

But here’s the kicker:  currently, PSLV trust units trade at a small premium around 0.75% of their net asset value (NSV).  And depending on the market’s sentiment, it sometimes trades at a discount to its NAV.  So investors can own PSLV and pay very close to spot prices for silver.  Once physical silver price premiums return to more normal levels, investors can then switch into physical.

Meanwhile, silver futures prices at such low levels versus physical prices are unsustainable.  This gap will undoubtedly close.  I think that will happen with futures prices rising to approach physical silver prices, but at considerably higher levels than currently.  And it could happen suddenly.

In my view, it’s physical investment demand that will be the biggest disruptor to the silver market for some time.

In the Silver Stock Investor newsletter, I provide my outlook on which silver stocks offer the best prospects as this bull market progresses. I recently added a primary silver producer to the portfolio, which has gained nearly 30% in just three short weeks, and I believe has exceptional potential to double or better in the next 12 months.

Investors need to have exposure to silver.  Now.

Disclosure:  I am long PSLV.