How bond yields are affecting gold

As U.S. Treasury yields rise, gold, which is seen as an inflation hedge, is hurting. Despite the obvious warning signs, investors remain bullish.

After Monday’s (Feb. 22) supposedly “groundbreaking” rally, the situation in gold developed in tune with what I wrote yesterday . The rally stopped, and miners’ decline indicated that it was a counter-trend move. 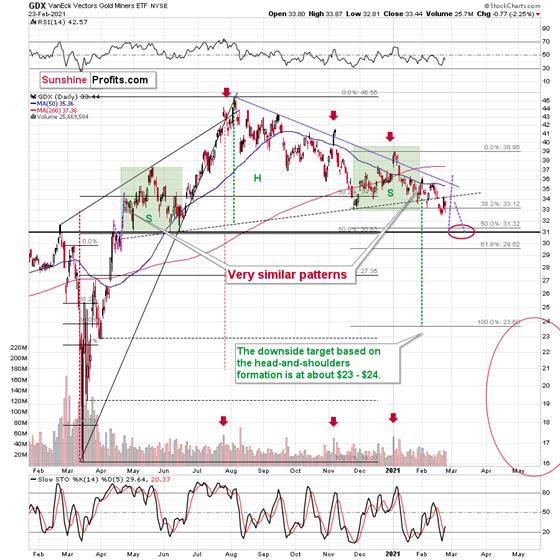 Despite Monday’s (quite sharp for a daily move) upswing, the breakdown below the neck level of the broad head-and-shoulders remains intact. It wasn’t invalidated. In fact, based on Monday’s rally and yesterday’s (Feb. 23) decline, it was verified. One of the trading guidelines is to wait for the verification of the breakdown below the H&S pattern before entering a position.

What about gold stocks ratio with other stocks? 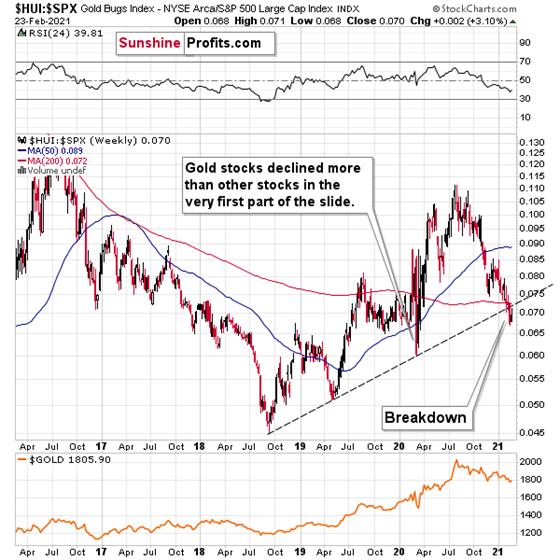 It’s exactly the same thing. The breakdown below the rising long-term support line remains intact. The recent upswing was just a quick comeback to the broken line that didn’t take it above it. Conversely, the HUI to S&P 500 ratio declined once again.

Consequently, bearish implications of the breakdowns remain up-to-date . Having said that, let’s consider the more fundamental side of things.

Swimming Against the Current

After trading lower for six consecutive days, gold managed to muster a three-day winning streak. However, with the waves chopping and the ripple gaining steam, every swim higher requires more energy and yield’s decelerating results.

For weeks , I’ve been warning that a declining copper/U.S. 10-Year Treasury yield ratio signaled a further downside for gold. And with the ratio declining by 2.88% last week, gold suffered a 2.51% drawdown. 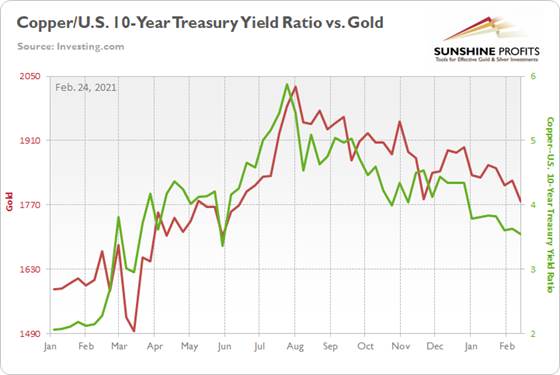 Over the long-term, the ratio is a reliable predictor of the yellow metal’s future direction. And even though the weekly reading (3.04) hit its lowest level since May 2020, it still has plenty of room to move lower. 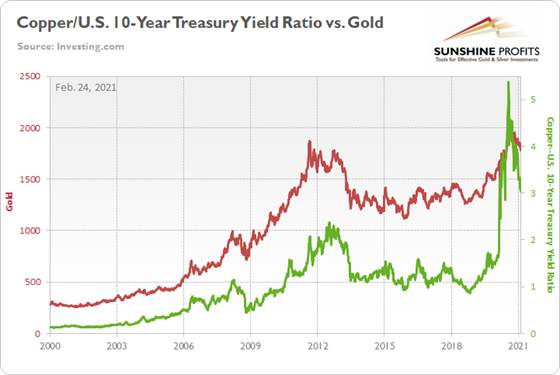 For context, I wrote previously:

As the star of the ratio’s show, the U.S. 10-Year Treasury yield has risen by more than 47% year-to-date (YTD) and the benchmark has surged by more than 163% since its August trough.

On Jan. 15 , I warned that the U.S. Federal Reserve (FED) had painted itself into a corner. With inflation running hot and Chairman Jerome Powell ignoring the obvious, I wrote that Powell’s own polices (and their impact on real and financial assets) actually eliminate his ability to determine when interest rates rise.

As a result, the central bank had two options:

“We’ve been living in a world for a quarter of a century where the pressures were disinflationary,” he said.... “The economy is a long way from our employment and inflation goals.”

And whether he’s unaware or simply ill-informed, commodity prices are surging. Since the New Year, oil and lumber prices have risen by more than 24%, while corn and copper prices are up by more than 14%.

In addition, relative to finished goods, the entire basket of inputs is sounding the alarm. 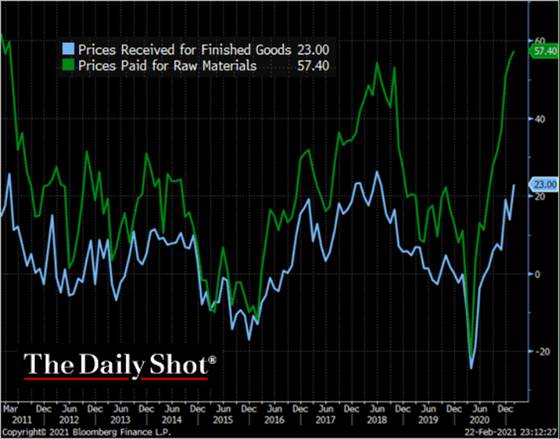 More importantly though, Powell’s assertion that inflation is an urban legend has been met with eye rolls from the bond market . To repeat what I wrote above: Powell’s own policies (and their impact on real and financial assets) actually eliminate his ability to determine when interest rates rise.

Case in point: the U.S. 10-year to 2-year government bond spread is now at its highest level since January 2017. 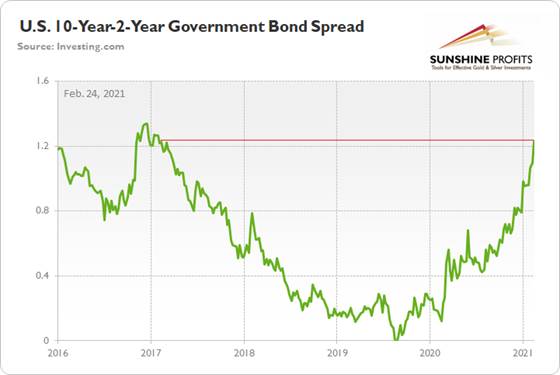 And why does all of this matter?

Because the above visual is evidence that Powell has lost control of the bond market.

At the front-end of the curve, Powell can control the 2-year yield by decreasing the FED’s overnight lending rate (which was cut to zero at the outset of the coronavirus crisis). However, far from being monolithic, the 5-, 10-, and 30-year yields have the ability to chart their own paths.

And their current message to the Chairman? “We aren’t buying what you’re selling.” As such, the yield curve is likely to continue its steepening stampede.

Circling back to gold, all of the above supports a continued decline of the copper/U.S. 10-Year Treasury yield ratio. With yields essentially released from captivity, even copper’s 8.02% weekly surge wasn’t enough to buck the trend.

As a result, gold’s recent strength is likely a mirage. The yellow metal continues to bounce in fits and starts, thus, it’s only a matter of time before the downtrend continues. Furthermore, with the USD Index still sitting on the sidelines, a resurgent greenback would add even more concrete to gold’s wall of worry.

And speaking of gold’s wall of worry, the sentiment surrounding it is far from being negative.

The above chart shows the sentiment of Investing.com’s members. 64% of them are bullish on gold. As you can see above, there are also other popular markets listed: the S&P 500, Dow Jones, DAX, EUR/USD, GBP/USD, USD Index, and Crude oil. The sentiment for gold is the most bullish of all of them. Yes, the general stock market is climbing to new all-time highs every day now, and yet, people are even more bullish on gold than they are on stocks.

When gold slides, the sentiment is likely to get more bearish and particularly high “bearish” readings – say, over 80% would likely indicate a good buying opportunity. Naturally, this is not the only factor that one should be paying attention to.