The dollar is dead; long live the dollar

There are so many false theories and narratives about the dollar and other assets, that I wanted to take a moment to pen an article with facts, rather than the false assumptions that are continually propagated and regurgitated throughout the market.

All I have been hearing of late is that inflation is on the rise or inflation is clearly going to rear its ugly head because of all the stimulus being offered by the government, as well due to the constant brrrrrrrrr of the Fed-machine. But is that really true?

So, with QE having begun in 2009 and clearly lasting through 2021, is the dollar truly dead today?

Well, for those following my analysis back in 2011, you may remember that I called for a major multi-year rally for the US dollar in July of 2011 from the 73 region, with a target of 103.31. Yes, I know that the market was only starting its QE process. And, yes, I remember all of those comments telling me I was off my rocker and that I knew nothing about markets because the Fed and QE were going to destroy the US dollar. And, yes, I know you “can’t fight the Fed.” I have heard it all. And, everyone was not at all shy about telling me how crazy I was for maintaining such a ridiculous expectation when it was so “clear” that the US dollar was about to go the way of the dodo bird.

Well, as we now know, not only did QE and the Fed not destroy the US dollar as everyone expected, I am quite sure that many of you have never even bothered to realize that the US dollar indeed rallied to my target (it even exceeded my idea target by 51 cents). So, looking back, does it make sense that the dollar entered into a massive multi-year rally while the Fed-machine was going brrrrrrrrrrr?

While it is abundantly clear that the common expectations about the dollar and the Fed were terribly wrong, do you think that anyone has abandoned their thoughts about how the Fed affects the dollar? Absolutely not. Rather, everyone again assumes the expected stimulus and the Fed’s printing machine will again kill the dollar. For some reason, people are more willing to accept these false narratives and ignore the facts of history, rather than recognize the truth for what it is. As Franklin once said, “Geese are but Geese tho’ we may think ‘em Swans; and Truth will be Truth tho’ it sometimes prove mortifying and distasteful.”

And, this is just one of the many fallacies which are constantly proliferated throughout the market. Yet, most of those guilty of such propagation are not burdened by the facts, as they are now back at it again.

Let’s take a moment to consider yet another related fallacy.

I remember back in the late 90s and early 2000 time-frame when gold was hovering around the $250-$300 region per ounce. At that time, even the investors who were bullish on gold were constantly repeating “I would not want to live in a $2,000 gold environment.” Moreover, those same individuals were certain the US dollar was going to crash and that society would have fallen apart if we were living in a $2,000 gold regime. Consider how many of you were also certain that if the US dollar should somehow rally, it would cause gold and the stock market to crash?

Well, as we now know, the 2000-2010 time-frame saw the stock market struggling to exceed the 1500SPX region. Yet, not only has the stock market well exceeded that 1500 resistance region and is now approaching the 4000 mark, but we are now “living in a $2,000 gold environment,” with the dollar still much higher than where it was in 2011.

I urge each and every one of you reading my words to finally take off the blinders placed upon you by the financial media and market pundits. While they continually regurgitate the same crap about the US dollar, gold and the stock market, it is your responsibility to recognize the facts of history, as those feeding you crap are clearly not burdened by the facts. While those commonly held fallacies make for better financial stories to fill useless pages and pages in the digital and print media, unfortunately it oftentimes convinces you to maintain the wrong expectations about market direction. In fact, those useless pages may best be used as toilet paper. 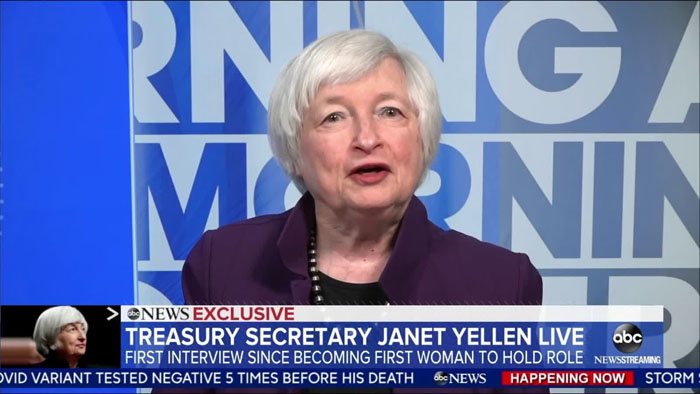 So, as a good Keynesian, our new Treasury Secretary and former Fed Chairman, Janet Yellen, is urging Congress to pass massive stimulus, while the Fed-machine continues to go brrrrrrr. Yet, consider the words of Mark Twain as the media and pundits again warn about the impending death of the US dollar. While Twain was in London, someone started a rumor that he was gravely ill. According to a widely-repeated legend, one major American newspaper actually printed his obituary. When Twain was told about this by a reporter, he quipped: “The reports of my death are greatly exaggerated.”

As it specifically relates to the US dollar, I think there could be some further weakness seen in the coming weeks, but I expect the DXY to hold the 87/88 region, and to then begin a multi-month “bounce.” So, I am not in the camp of those who believe in the imminent demise of the US dollar, as the continued and common reports of its demise are, again, greatly exaggerated.

Avi Gilburt is a widely followed Elliott Wave analyst and founder of ElliottWaveTrader.net, a live trading room featuring his analysis on the S&P 500, precious metals, oil & USD, plus a team of analysts covering a range of other markets.