Gold is so rip-snortin' cheap!

Ok, we admit it with respect to last week's piece "Gold's Near-Term Brush with the 1600s": we were a bit dubious about the 1600s potentially getting teased. To be sure as a broad-term Gold bull, penning negatively about price hardly is pleasant. But we're guided by what the numbers are and as to what then generally occurs when said numbers are what they are.

Thus upon Gold's weekly parabolic trend a week ago flipping from Long to Short, we assessed the numbers, wringing from them what we could best foresee, and wrote that Gold (then 1783) faced getting sold sub-1700. And for this past week in settling yesterday (Friday) at 1733 -- the net decline of -2.8% being Gold's worst weekly loss in three months -- price en route traded down to within 15 points (at 1714.9) of the 1600s. Again, to write and be right can be downright annoying, especially per the following graphic of Gold's weekly bars from a year ago-to-date wherein said parabolic Short trend has only just started per the rightmost two red dots:

Gold's technical saving grace however is the delineated 1789-1672 structural support zone. Gold's fundamental saving grace is (by the price today of 1733) being just 47% of our opening Scoreboard currency debasement valuation of 3698. Too, 1733 -- should we be correct about Gold reaching 2401 in 2021 -- means a gain of 39% remains in the offing from here this year. And per currencies' bizarro printing pace (other than the market never being wrong) hardly can valuation be "priced in" a wit. The first time Gold reached 1733 (nearly 10 years ago on 09 August 2011) the U.S. Money Supply as measured by M2 was $9.5 trillion and the Gold supply was 175k tonnes. Since then, M2 has more than doubled, but the supply of Gold is only 14% higher. "So, why are we here?" you ask. "So, when do we leave?" we ask. (Ours is not to reason why, but rather be on board for departure).

"So, mmb, what you're saying is there's not too much more Gold downside from here?"

Squire, Gold is so rip-snortin' cheap at this juncture 'tis a gift from the gods: currency debasement proves it so. Just as the S&P 500 is so fatally beyond expensive 'tis a trap to snap: lack of earnings proves it so.

(Note for those of you scoring at home during this Q4 Earnings Season: with 455 of the S&P's 505 constituents having reported, 79% have beaten estimates ... but just 59% have actually bettered their bottom lines over those of a year ago. And our honestly-calculated "live" price/earnings ratio for the S&P at this writing? 73.1x ... share that with your money manager and then watch them squirm in their game to disclaim same. Or perhaps you'll just hear crickets...)

That said, we've still Gold at the bottom of the year-to-date BEGOS Market Standings, the two big economic (stagflative?) winners being Oil and Copper. Indeed for you readers of our daily Prescient Commentary, you'll recall our penning on 02 February (Oil then at 53) that "...structurally 'twould appear price can run up to test the Jan 2020 high of 65.65..." Oil reached 63.81 this past Thursday, Black Gold thriving, but Real Gold diving. Here's the table:

Economically, StateSide reports on balance are a-poppin'. Just in the past week, The Conference Board's February reading on Consumer Confidence improved, as did January reports for Leading (we say "lagging") Indicators, New Home Sales, Durable Orders, and both Personal Income and Spending. True, there was one real stinker: the Chicago Purchasing Managers Index suffered its largest drop since COVID really kicked in last April. But otherwise, Jumpin' Joe's economy is, well, jumpin':

'Course as Australia's sovereign Future Fund chairman Peter Costello just remarked, "Anyone who thinks they know what the conditions of the economy will be in three years’ time is kidding themselves." He (as we) sees a global equities markets "clean-out", (and see the aforementioned S&P P/E).

Still, Federal Reserve Chairman Powell in testifying before Congress this past week expects "easy money" to be maintained, all of which ought soundly redound to Gold's gain. And whilst others of the week's FedSpeak expressed little concern over rising interest rates, we're watchin' them with an eagle eye: the yield of the 30-year Bond is now up to 2.182%, that on the S&P 500 is 1.474% (where is your dough sitting, eh?), and that on the neighbouring 10-year Note is 1.460%. "Tick, tick, tick..."

In moving to the specific state of the BEGOS Markets across their respective daily bars from one month ago-to-date, there are some really obvious anomalies per the grey diagonal trend lines. The €uro is rising against the Dollar ... but the Swiss Franc is falling; Silver is rising ... but Gold is falling. And the bullish economic lean is there as the Bond falls (i.e. yields rise), with Oil, Copper and the S&P 500 having gone to the skies. The key across the spectrum, 'natch, are the "Baby Blues" of each trend's consistency (S&P & Queasy):

Despite being broadly optimistic for the precious metals, our view per their 10-day Market Profiles -- Gold on the left and Silver on the right -- is a bit onerous given the denoted bulk of overhead trading resistance across the big bellies of both Profiles:

Moreover is seen the yellow metal's monthly malaise year-to-date as we turn to Gold's Structure across the past 10 years. With just two months now complete in 2021, Gold has been "Southbound"--[Allman Brothers, '73] in having departed "The Gateway to 2000", with whistle stops at "The Final Frontier" and "The Northern Front", to have now arrived back "on maneuvers..." all as therein labeled. And yet, our forecast high for this year of 2401 remains confidently in place at upper right: 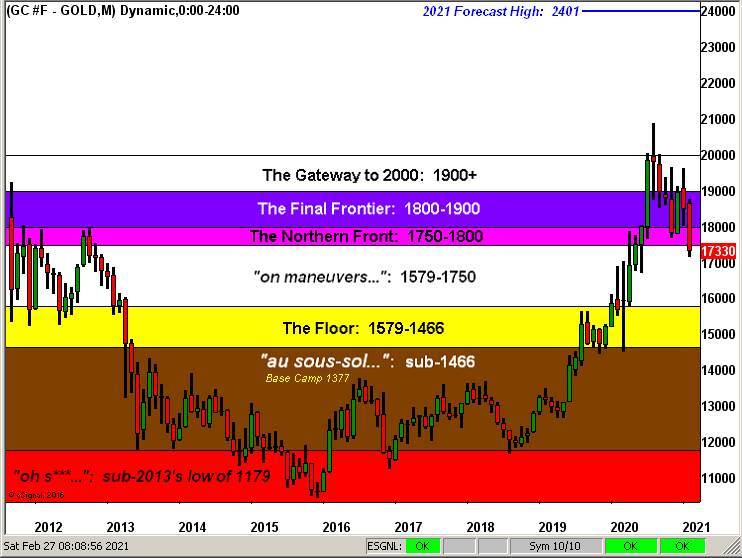 Another busy week awaits the Economic Barometer with some 14 incoming metrics coming due; plus on Wednesday we get the Fed's Tan Tome of regional activity. Regardless, watch for increasing volatility in the markets. A would-be Gold brush with the 1600s is hardly far from here, but more importantly either way we sense firming in the offing for higher levels. And as for the S&P, a variety of its textbook technical studies have already turned negative, notably the daily MACD ("moving average convergence divergence") and daily Parabolic studies; too, the daily Price Oscillator is negatively trending, and the Moneyflow as regressed into S&P points is extremely negative.

And yet: you're still in the stock market? Ouch! Please take care there... And for wealth's sake, do remain Gold-aware, as by the numbers we keep, 'tis so rip-snortin' cheap! 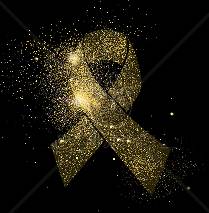