Gold resting at support - where next?

While stocks are seeing a rebound on the way to new highs, what about the embattled gold? Its seasonality component was "slated" to help the bulls in Feb, and the king of metals instead succumbed to nominal yields pressure. Would the Mar historically negative slant be likewise invalidated – and again precisely for the reason called long-dated Treasuries?

Regardless of the immensely positive fundamentals behind the precious metals (including real rates, the true determinant, little changed and at -1%), it has thus far been commodities and Bitcoin who rose and held on to their gains since the 2H 2020. Please remember the big picture chart about commodities and precious metals taking turns in rising that I presented on Feb 17. The bullish case for gold (let alone silver) isn't lost – merely thoroughly questioned these weeks of sordid $HUI:$GOLD underperformance.

Precious metals offered more than a few bullish signs way earlier in Feb. Based on the evolving charts and gold's failure to gain credible traction, I was at least able to time most of the downside before it happened – such as last week. Still, there has been little bullish that could be said about the PMs complex, as encouraging signs emerged only to be gone shortly.

So, where do we stand at the moment?

Gold and Copper to Oil Ratio 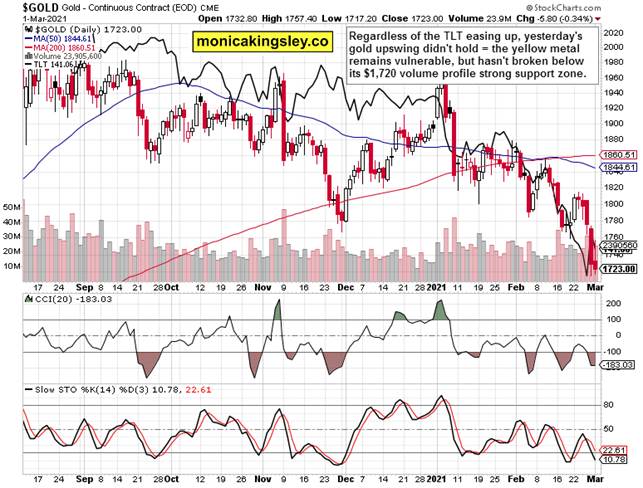 Rising TLT rates are turning a corner, but the yellow metal is staying at the strong volume profile support zone that marks the April-May consolidation zone. Earlier today, gold cut all the way to its lower end (that's low $1,700s) before rebounding. The danger zone hasn't been cleared in the least yet, but the signs of silver reversing once again from a double test of $26, is as encouraging as copper rising again, and oil not tanking. 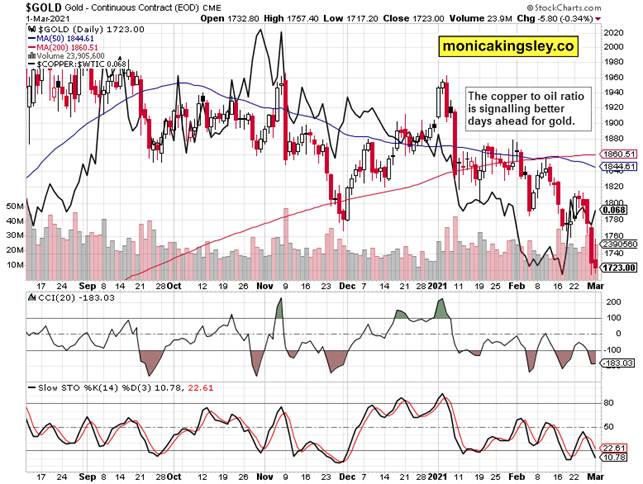 The copper to oil ratio whose long-term perspective I featured yesterday, is making a clear turn on the daily chart. Coupled with the TLT stabilization, and the dollar trading with relatively little correlation to gold these days, the table is set for a short-term rebound in the metals. How far would these take the sector?

The numerous bears would have you believe that not too far & that another downleg to ridiculously low values is at hand, but I am not convinced and prefer reading the tape instead. Yes, even in the mostly bearish PMs chart setups where nothing bullish has stuck for longer than several day over the past weeks. I repeat that the $1.9T stimulus bill (and infrastructure bill, even slavery reparations if we get that far really) hasn't been truly factored in by the markets – and yesterday's S&P 500 action proves that.

Silver keeps consolidating in a bullish pattern well above $26 still (not that it would be the line in the sand though), and when the silver miners (SIL ETF) start leading again, a new silver upleg would be born. For now, these are still mirroring the weak gold miners' performance, which is free from bullish signals for the yellow metal still. The gold sector isn't yet ready to run, plain and simple.

Gold remains precariously perched, yet isn't breaking down – the bull run off last spring's consolidation remains intact – regardless of the short-term gloom and doom. I see the metals as likely to recover next as the Treasury yields stop biting. Restating the obvious, gold is far from out of the woods.

Thank you for having read today's free analysis, which is available in full at my homesite – including the stock market part. There, you can subscribe to the free Monica's Insider Club, which features real-time trade calls and intraday updates for both Stock Trading Signals and Gold Trading Signals.