Not since the Spanish flu, which was also known as the 1918 influenza pandemic, did a virus cause harm on such a global basis. The Covid-19 pandemic, which has now been with us for about a year, has left every economy worldwide in upheaval sparing no country on earth. Unlike the Spanish flu, science was able to quickly identify and create multiple vaccines which are just starting to allow the world to heal, which will be followed by a period of economic rebuilding.

The New York Times reported that over the past week, there had been a decrease in new cases by 14% from the average two weeks earlier. Hospitalizations have declined by 29%, deaths have remained flat to lower.

This brings us to today’s release of the jobs report from the U.S. Labor Department. According to the U.S. Labor Department, employers added 379,000 new jobs in February. This was the largest increase at the fastest pace since October. The new jobs created brought the unemployment rate down to 6.2% from 6.3% in January. More so, the jobs report came in well above estimates which predicted that only 182,000 jobs would be created last month.

That being said, the road to recovery, like the pandemic, will be a slow recovery. Considering that there are still approximately 9 million unemployed in America, the largest economy in the world, it will take time before the United States reaches a normalized economy.

According to the Washington Post, “While February’s faster job growth represented progress, it’s still not good enough. If employment were to continue growing at February’s pace — so, 379,000 new jobs per month — it would take two more years to reach the level of jobs that existed pre-pandemic. And that still undershoots the goal, because the working-age population has continued growing. So we really want more jobs than existed when the pandemic began, rather than merely a recovery of jobs lost.”

These numbers continued to weigh heavily on gold futures pricing, with the most active April 2021 Comex contract still trading just below $1700 per ounce. As of 5 PM EST, gold futures are currently trading at $1698.20, which is a net decline of $2.50 (-0.15%). Concurrently spot or physical gold is trading very close to the futures price at $1698.64. In fact, over this last week, we have seen an inversion where spot pricing is close to or just above futures prices. The main factor in the recent decline of gold has been dollar strength which has been the byproduct of rising yields in U.S. Treasuries, with the 10-year note currently trading right around 1.5%. 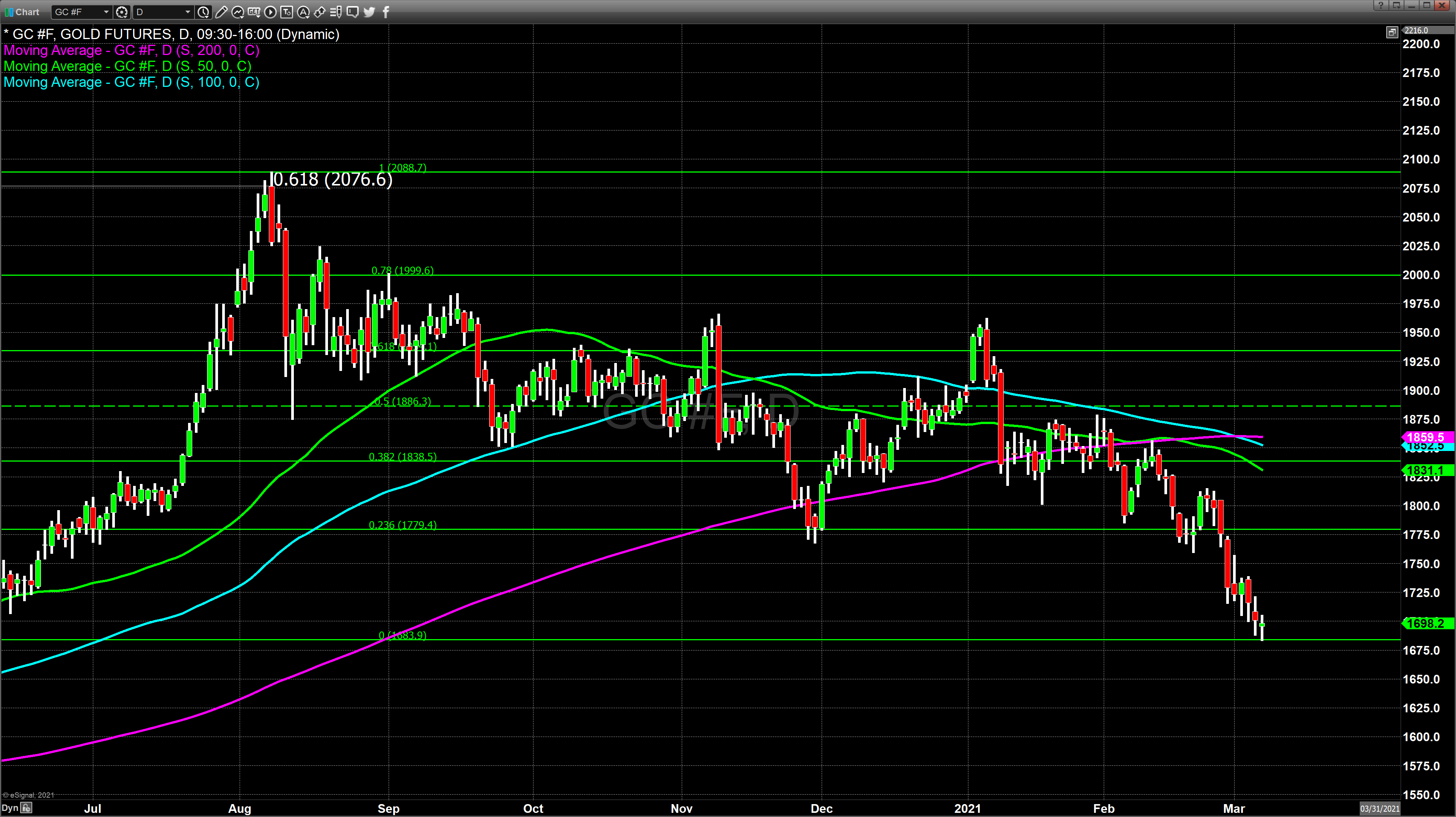 The KGX or Kitco Gold Index is currently fixing the price of spot gold at $1700.10 per ounce, which is a per ounce which is a net increase of $3.20 on the day. On closer inspection, it was dollar strength that actually caused gold to decline $7.50 in price; however, traders buying the dip moved gold back above the key psychological level of $1700 by bidding at higher to the tune of $10.70.

In light of today’s gains in the U.S. dollar index, which traded up by approximately ½ a percent and closing today at 92.025, gold’s performance fared quite well. Whether or not gold will find support again at $1700 or whether this will be a resistance area that pressures gold prices lower is something we will have to wait to see. In the meantime, we have to recognize that gold prices are still in a full bearish formation given recent price declines. 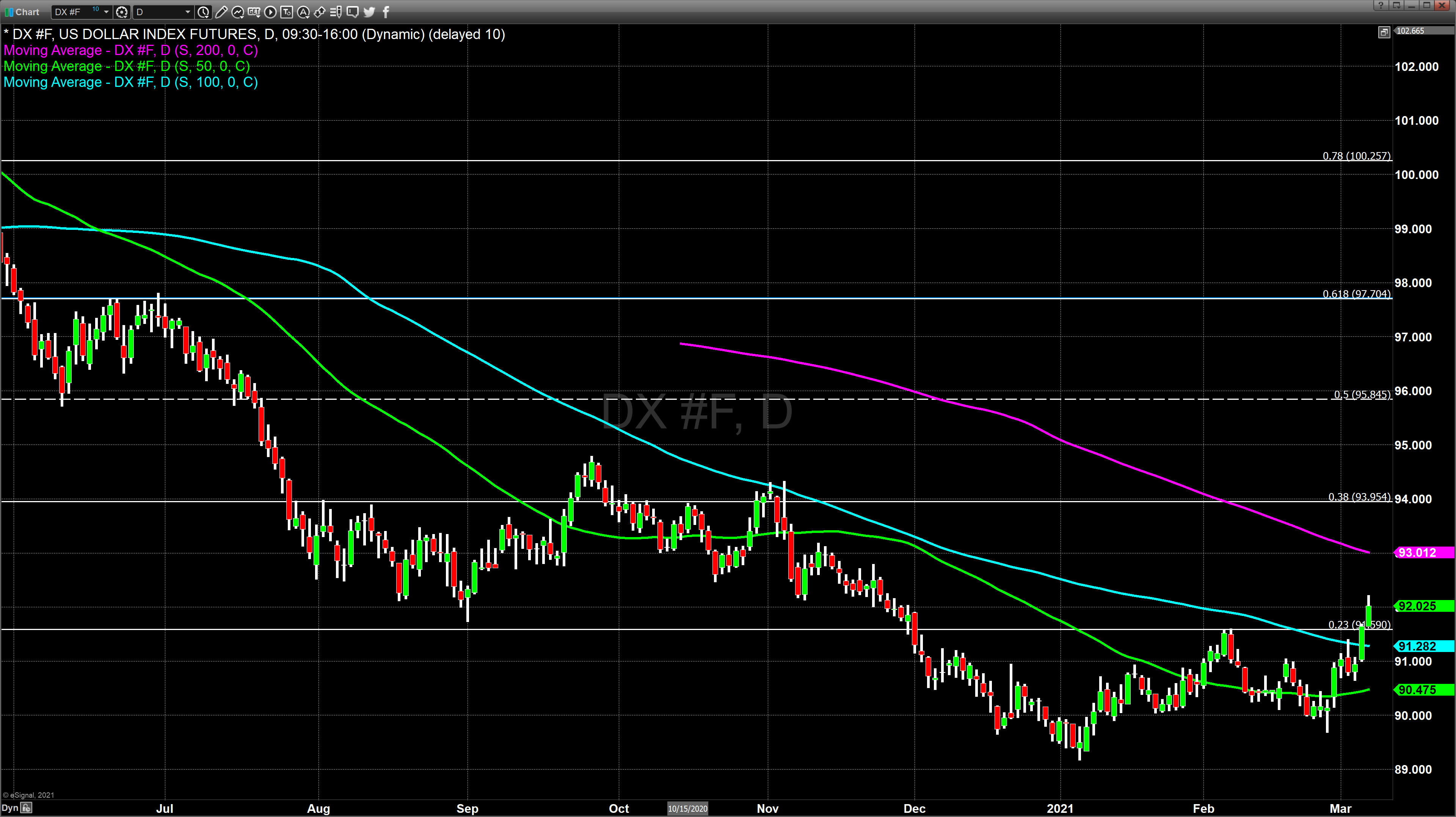