Now really apropos is our anticipatory piece from two weeks ago ("Gold's Near-Term Brush with the 1600s") as 'tis become reality. Gold settled out the week yesterday (Friday) at 1698 (almost kissing where 'twas a year ago in the above chart) and has now traded in tow to as low as 1683. And that low is flirtatiously close to the defined bottom of the 1789-1672 structural support zone as shown in the following chart of Gold's weekly bars:

Further infused (as a week ago mused) is the annoyance of weathering price so abused. Obviously per the graphic's rightmost declining red dots, the parabolic trend (our friend?) is Short, but as we've sassed in the past, "...with friends like that, who needs enemies..."

Well clearly 'tis there, Squire, but best that we not mention it, as:

a) 'tis comprehensively nonsensical for Gold to venture much lower from here;

b) we don't want to unduly shock our valued readership; and

c) why trade lower when our forecast high for this year of 2401 means Gold trade higher?

Moreover, always maintain in mind that price historically "reverts to the mean" (if you will) of its currency-debased value (even as adjusted for the relatively wee increases in the supply of Gold) which per our opening Scoreboard today puts price at 3710. Other pop-valuation schemes of where Gold "ought be" we deem as comparatively meaningless.

Speaking of means, we've been herein wary for some time of Gold's price having traveled so far above its stalwart 300-day moving average that a technical correction was realistically in the cards: and there it starkly shows at right in the following graphic of price's daily closes across the past ten years. Such reversion to that mean now seen, 'tis time for Gold to hit the brakes whilst wresting the steering wheel into full 180° lock, let it snap back to center, pop the clutch and hit the throttle!

Fact is, as you regular readers well know, hardly are we as concerned about the price of Gold as are we about the unsupportable (understatement) level of the stock market as measured by the S&P 500. Herein we've been hammering on the yield of the riskless 10-year U.S. Treasury Note (1.554%) at some point surpassing that of the riskfull S&P (1.517%).

And in the wake of our writing a week ago to "watch for increasing volatility in the markets", so it came to "pass" (not surprising you a wit) this past Thursday when at precisely 17:20 GMT the yield on the 10-year U.S. Treasury Note passed above that of the S&P in eclipsing 1.500%. The S&P Index at that moment was 3827 ... but 97 woeful minutes later at 18:57 GMT, the S&P had careened down 100 points ... that is over double the median trading range of an entire day (in measuring from one year ago-to-date).

Moreover, 'tis just another of many indications that the stock market is due for a wholesale crash, be it due to rising yields, a terrible earnings season for the S&P (only 59% bettered their bottom lines, and worse, 82 of the 505 constituents don't even have earnings), single stock manias, bogus bits**t, and our favourite measure: the honestly-calculated S&P "live" price/earnings ratio now being 68.7x.

In the midst of it all, there are those presently arguing for inflation, some for stagflation, some for depressionary deflation and at the other end of the spectrum those for hyper-inflation. But regardless your flavour of flation, at the end of the day, again 'tis the supply of faux dough vs. that of the yellow metal which ultimately determines the price of Gold. (Unless after 5,000 years 'tis suddenly different this time ... we don't think so).

Meanwhile the Federal Reserve -- the oft-overlooked role of which is to maintain a steady valuation of the Dollar (stop laughing) -- is looking to "keep prices well in check" even as Chairman Powell adamantly desires sticking to "easy money" all 'round.

And as for the Economic Barometer, its week was chock full of "better buts": February's Payrolls (Bureau of Labor Statistics) grew, but those per ADP fell; Hourly Earnings grew, but the Average Workweek fell; the Institute for Supply Management's Manufacturing Index grew, but its Services Index fell; whilst for January, Factory Orders grew, but so did the Trade Deficit, and Construction Spending increased, but Consumer Credit decreased. Dump it all into your Osterizer, press "purée", and voilà, here's the Baro along with the S&P (red line) commencing what we believe ought be a long overdue journey lower:

Lower of course remains Gold as to our proprietary technicals we go, the last three months-to-date of daily bars on the left and 10-day Market Profile on the right. Neither panel is pretty, Gold's baby blue dots of linear regression trend consistency declining ever more so, whilst in the Profile some supportive defense has been created 'round the denoted 1696 level:

As for Sister Silver, the like dual-panel drill finds her "Baby Blues" only barely below their 0% axis, albeit looking to accelerate lower into the new week; Silver's 26.13-to-24.04 support area (below left) is thoroughly being tested, with the key trading supporter per her Profile (below right) at 25.25:

To wrap it all for this week, we saw the Dow Newswires report that (according to the Congressional Budget Office) StateSide national debt is projected to be some 202% of Gross Domestic Product by 2051. Should we make it that far, we'll be nearly 100 and the price of Gold (by regression extrapolation) up beyond 5000. Which put us in mind of this graphic from away back in our 18 February 2012 missive: 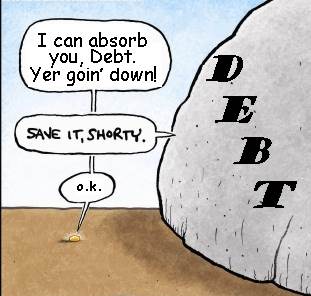 So don't allow such destiny to brush you away; rather, take advantage of Gold's brush with the 1600s today!