Gold and silver had mixed results in trading today

After two days of substantial gains, we see both gold and silver consolidating at current pricing. This factor bodes well for the assumption that both precious metals, after sustaining an approximately 61.8% Fibonacci retracement from the highs achieved in August of last year, as potentially an area to find support and form a bottom. 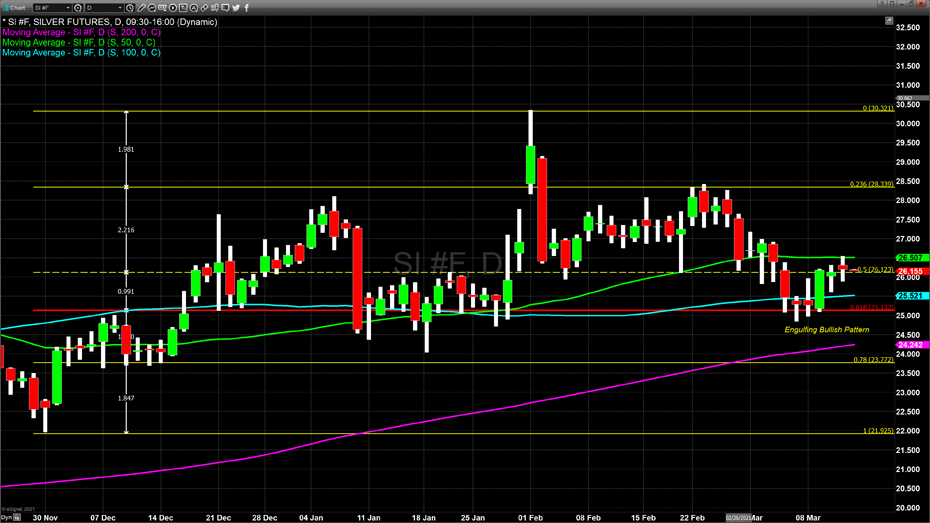 Even with the muted price change from yesterday, if the recent gains were a so-called "one and done" scenario, we most likely would have seen a retracement from the gains achieved on Tuesday and Wednesday.

Gold pricing was definitely influenced by a weaker U.S. dollar and fractionally lower yields on U.S. bonds. While this also benefited silver pricing, it was the industrial component that added more fuel to the fire, with U.S. equities once again in rally mode. 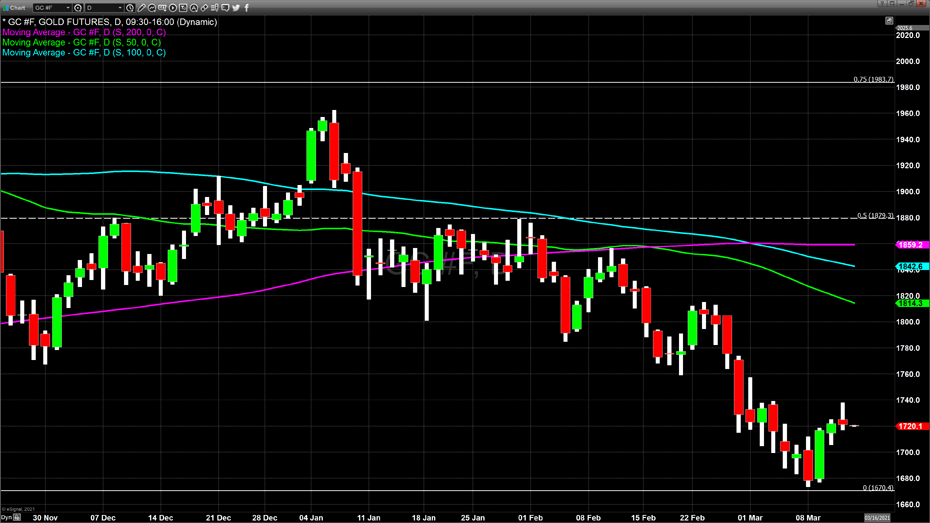 However, I believe the recent round of government spending both in the United States and abroad will devalue the currencies of the eurozone and the United States. On Wednesday, Congress approved President Biden's $1.9 trillion fiscal stimulus aid package. In a vote of 220 to 211 the House passed the president's "American Rescue Act." The Senate passed the same resolution in a vote of 50 to 49, with a vote that followed party lines making it a genuinely partisan bill.

According to the New York Times, this financial aid package is "one of the largest injections of federal aid since the Great Depression. It would provide another round of direct payments for Americans, an extension of federal jobless benefits and billions of dollars to distribute coronavirus vaccines and provide relief for schools, states, tribal governments and small businesses struggling during the pandemic."

President Biden has already signed the bill into law this afternoon. Originally it was announced that he would sign the aid package on Friday. However, the president, along with his advisers acutely aware that those who most need this injection of fiscal stimulus (low and middle-income Americans) are living week to week, meaning that the next round of fiscal stimulus checks cannot come soon enough. In the case of those unemployed, those benefits are set to run out this weekend. In other words, time is of the essence, and the White House is aware of this.

Just before signing the bill in the oval office, the president said, "This historic legislation is about rebuilding the backbone of this country and giving people in this nation, working people, middle-class folks, people who built the country, a fighting chance. That's what the essence of it is."

The president will address the nation tonight in which he will educate the public as to the benefits which will be forthcoming through the relief package. Addressing the nation, he said this conference would "talk about what we been through as a nation this past year. But more importantly, I'm going to talk about what comes next. I'm going to launch the next phase of the Covid response and explain what we will do as a government and what we will ask of the American people."

While there may be a partisan divide as to how this $1.9 trillion has been allocated, there is a bipartisan acknowledgment that there are still nearly 9 million individuals that are unemployed and millions of Americans that cannot pay their rent or financially function in any solvent manner.

That being said, with the acknowledgment that aid is greatly needed, the undeniable fact is that

it increases our national that by almost $2 trillion. When this capital expenditure is added to the $4 trillion spent last year, one has to recognize that there will be some level of economic fallout. Never since the Great Depression

have we allocated such a large amount of capital to reignite the economy and aid those Americans in need. While it most certainly will pressure the U.S. dollar lower, the real question becomes how many years will it take to overcome the increased national debt.

It is for that reason, on a fundamental basis, that many investors and major institutional players will take a fresh look at the safe-haven asset class. The only caveat to that would be rising yields that would compete with those investment dollars. Also, besides these safe-havens, Bitcoin is also in direct competition with both not as a risk-off but rather as a way to overcome the inflationary pressures all of this spending will certainly provide.