Back to the basics; strong dollar and stable Treasury yields take gold lower

There have been numerous factors that have pressured both gold and silver pricing lower. A strong U.S. equities markets which hit numerous all-time highs over the last six months and Bitcoin's rising value being prevalent as causes for both gold and silver pricing to trade under pressure. However, it has been dollar strength, coupled with the recent rise in yields of U.S. Treasury 10-year notes that have been the most recent factors pressuring the safe-haven asset class.

According to Reuters, "Gold fell on Thursday as U.S. Treasury yields nudged up and the dollar hit a four-month high, denting the non-yielding metal's appeal." 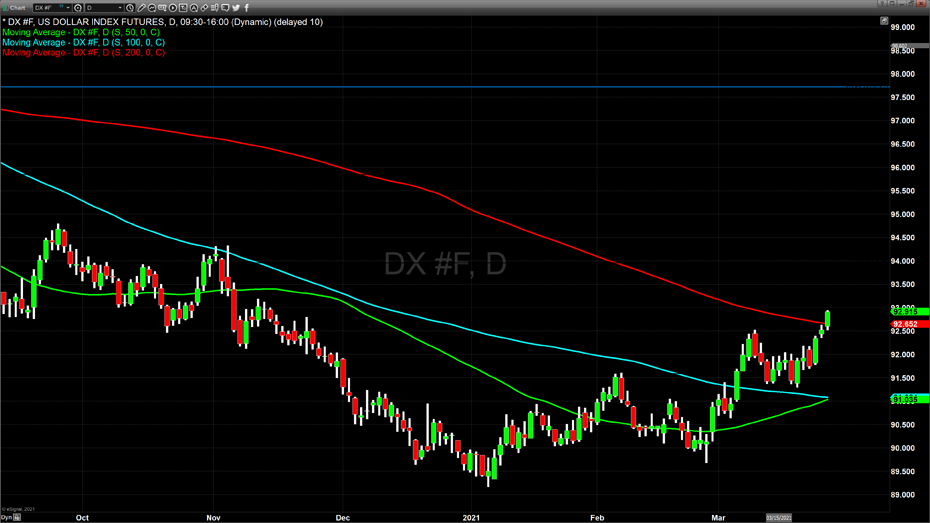 The 10-year Treasury notes have been rising since the first week of March when yields were just above 1.4%. Currently, the yield on the 10-year notes is fixed at 1.614%. Both a strong dollar and higher yields are occurring concurrently with stronger U.S. equities markets which had modest gains in trading today. The Dow Jones industrial average gained 199.42 points, or +0.62%, and is currently fixed at 32,619.48. Both the NASDAQ Composite and S&P 500 closed fractionally higher on the day. Collectively these three factors, dollar strength, higher yields, and strong U.S. equities, have contributed to pressuring both gold and silver pricing lower.

On a technical basis, gold remains bearish. After hitting a low during the second week of March at approximately $1670, gold prices climbed to $1750 before consolidating and moving sideways and slightly lower. The three major moving averages are in complete bearish alignment.

This means that the 200-day moving average is at the highest value currently at $1859.70. The 100-day moving average comes in just below that price point at $1827.20, with the short-term 50-day moving average currently fixed at $1785.20. More alarming is they are once again beginning to show signs of divergence as the respective moving averages move farther away from each other in price. Currently, our technical studies indicate that there is major resistance in gold at $1768.80, which corresponds to a 50% retracement of the rally that began in mid-March 2020 when gold was trading at $1450 to the new record high achieved in August at $2088. Gold prices would have to move above $1768 before we had solid technical confirmation that the bulls have begun to regain control of price action. There is solid support for gold at $1680  to $1700. 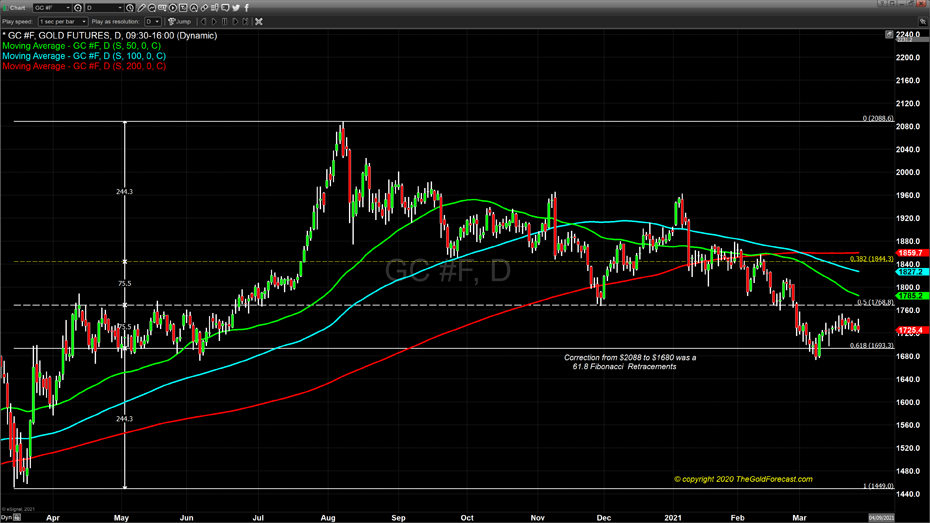