Fed Chair Jerome Powell has outdated views on Bitcoin: cryptocurrencies are not just a substitute for gold

Federal Reserve Chair Jerome Powell is making waves in the cryptocurrency market after he threw some shade at bitcoin and other digital currencies, calling them simply speculative assets.

"Crypto assets are highly volatile and therefore not useful as a store of value. It is a speculative asset that is essentially a substitute for gold rather than for the dollar," Powell said on Monday in a panel discussion organized by the Bank for International Settlements (BIS).

Bitcoin and other cryptocurrencies can be volatile, but that is just a simple argument used to dismiss them. Unfortunately, Powell's opinions are incredibly outdated views of the cryptocurrency space.

Data compiled by CoinPayments, the world's largest crypto payment processor, shows that a growing tidal wave of merchants and consumers are embracing digital currencies as a form of payment, as an investment, and as a means of exchange. From the first quarter of 2019 to the fourth quarter of 2020, the North American cryptocurrency market saw a 300% increase in transactions as more businesses and merchants embraced digital currencies.

The reality is that current government and central bank policies have created a need for new currencies that protect people's wealth and preserve their purchasing power.

Central banks worldwide have embarked on ultra-loose monetary policies that aren't expected to end anytime soon. The reality is that we have no idea how these policies are going to impact the global economy. Still, many experts see the only outcome from all this money printing -- and added debt -- is inflation.

It's not just consumers that are embracing digital currencies as a new global currency. Last month, Tesla shocked the financial world after it announced that it was investing in bitcoin and accepting bitcoin as payment for its vehicles. The company said that it is looking at alternative assets as a hedge against growing currency risks in the marketplace.

"We transact business globally in multiple currencies and have foreign currency risks related to our revenue, costs of revenue, operating expenses and localized subsidiary debt denominated in currencies other than the U.S. dollar," the company said in its filing. "If we do not have fully offsetting revenues in these currencies and if the value of the U.S. dollar depreciates significantly against these currencies, our costs as measured in U.S. dollars as a percent of our revenues will correspondingly increase and our margins will suffer."

If companies are worried about a potentially weaker U.S. dollar, then the threat is genuine. With some companies sitting on trillions of dollars, it is not surprising they are going to start diversifying into cryptocurrencies. Unfortunately, the Federal Reserve will be left trying to catch up to the rest of the market.

It is challenging to dispute Tesla's outlook on the U.S. dollar. In the last 12 months the value of the U.S dollar against a basket of global currencies has lost 8%. During the same time bitcoin, the leading cryptocurrency, has rallied more than 800% 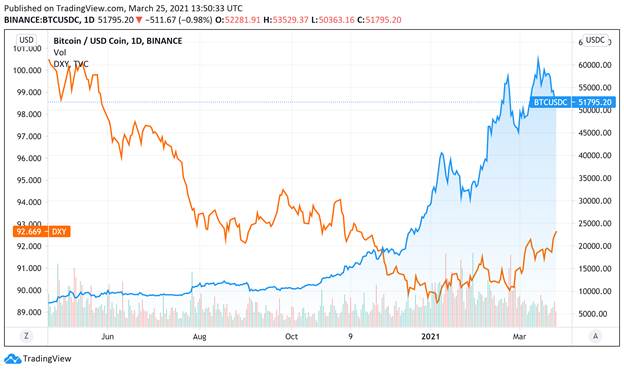 Yes, bitcoin and other cryptocurrencies can be volatile, but there is no denying that they have become a store of wealth and a trusted means of exchange for many consumers as well as business owners, and it's only a matter of time before that wealth is unleashed.

That said, policymakers should no longer ignore the impact cryptocurrencies are having on the global currency market.