This week Fed Reserve Chair Jerome Powell spoke at the "Innovation Summit" hosted by the Bank for International Settlements.

During his talk, he dissed bitcoin and cryptocurrencies saying they were "…highly volatile and therefore not really useful stores of value, and they're not backed by anything."

OK, let me get this straight.

At its latest FOMC meeting the Fed promised near-zero interest with no rate hikes until 2023, and its $120 billion monthly asset purchases see no sign of abating.

In the past year, the Fed has unleashed the largest multi-trillion-dollar quantitative easing fiat money campaign the world's ever seen.  And that's saying a lot after its reaction to the 2008 financial crisis.

Where is this "money" coming from?  These are trillions of currency units "not backed by anything", which Powell himself wants to see lose value through higher inflation.

The COVID-19 pandemic has changed our world.  Many of the existing structural problems, like easy money policies, record high corporate and personal debts, and national debts and deficits have ballooned to historical levels.

Trying to dial back these measures will prove not only futile, but likely impossible.

And this places gold in a perfect "sweet spot" to gain more favor, and continue on its historic bull run.

But let's look at a timeline of what happened a year ago for some perspective.

The Federal Reserve had held multiple emergency meetings to that point in March as stock markets crashed.

On March 19th, President Trump announced details of an historic $1 trillion economic package.  Congress was asked for $500 billion for direct payments to taxpayers.  Stimulus checks of $1,200 per person were, in effect, economist Milton Friedman's theoretical "Helicopter Money" tool, popularized by Ben Bernanke in 2002.

"Helicopter Money" was no longer just "theory".  It had moved from the lab to the real world.

On March 23rd, the Fed pledged a slew of programs to help markets function more smoothly.  It promised unlimited quantitative easing through its asset purchase program.  The Fed even moved, for the first time ever, into buying corporate bonds from primary and secondary markets through ETFs.

This was, in effect, the start of QE Infinity.

So I ask, what do you expect of inflation?

Inflation "Baked in the Cake"

According to the U.S. Bureau of Labor Statistics, the CPI for All Urban Consumers was up 1.7% over the last 12 months.  I say hogwash.

The most basic staples like food, building supplies, and energy have been soaring. 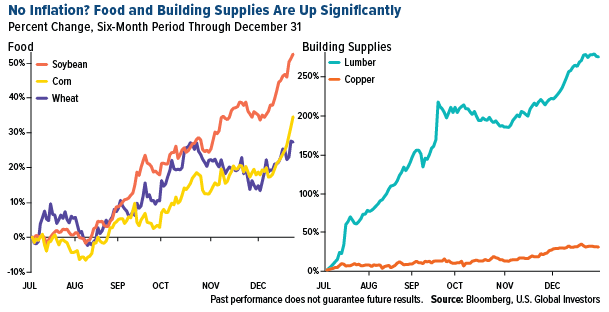 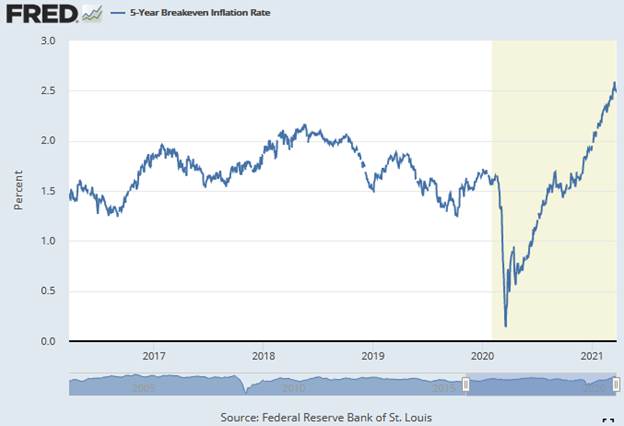 Which in turn explains why the 10-year Treasury Yield has soared of late. 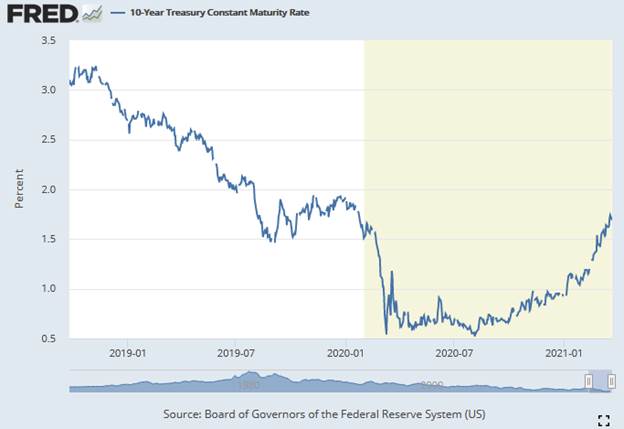 This has dented not just gold, but also stocks of all stripes.  Meanwhile, the US dollar has risen along with yields.

So, as much as Powell may jawbone about resisting initiating a policy of Yield Curve Control, those limits may soon be tested.

Remember, right now these rates are competing with and therefore pressuring gold.  I expect to see either a leveling off of longer-term rates, or a Fed reaction to cap them if deemed necessary.

That would likely cause renewed dollar weakness and a return to falling real negative interest rates.  And this could be a catalyst to launch gold higher, potentially setting new all-time record highs.

As Jeff Clark of Goldsilver.com recently pointed out, there are multiple instances of large inflation spikes over very short time periods. 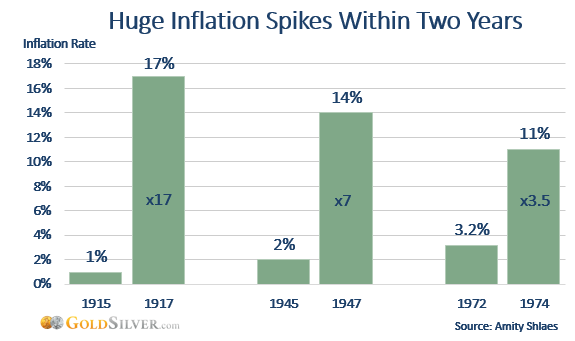 Once gold gets a whiff of this kind of action, it will likely be a major catalyst triggering a huge rally.

Investors should be preparing now for the inflationary effects of an abating pandemic and the release of massive pent-up demand on a majority of economic sectors.

In the Gold Resource Investor newsletter, I provide my outlook on which stocks offer the best prospects as this bull market progresses. I recently added a low-risk, deep value gold royalty company to the portfolio which I believe has exceptional potential to outperform its peers in the next 12 months.

Right now gold is simply pausing as we work through rising inflation expectations, and the implications that brings.

Odds strongly favor gold being much higher 12 months from now.  This is the time to position in gold and gold stocks.