Biden just announced an ambitious and expensive infrastructure plan. Will it rebuild gold?

That doesn’t sound bad at all (after all, infrastructure is critical), but there is a catch. The plan assumes that all the spending will be financed by tax hikes. Biden proposes to raise the U.S. corporate tax rate from the 21 percent set by Trump to 28 percent, as well as to eliminate all fossil fuel industry subsidies and loopholes. So, according to the proposal, the tax reforms will add about 0.5 percent of GDP in fiscal revenues, which are believed to fully pay for investments within the next 15 years.

What does Biden’s infrastructure plan mean for the U.S. economy? Well, I won’t argue that American infrastructure needs upgrading. There is a bipartisan agreement here. The problem is, however, that government spending programs are usually inefficient, and cost more than initially planned . Additionally, the plan seeks to give the government a significant role in new important areas, and to introduce anti-business and pro-labor unions regulations.

So, generally speaking, the proposal stems from Biden’s progressive belief that government can and should be a primary driver for economic growth, which is just plain wrong. As both economic theory and empirics show, the private sector is inherently more efficient than the bureaucrats (you can ask people in the former communist countries whether it’s true). Such a revolution in U.S. economic policy will weaken the allocative efficiency and hamper the long-term pace of economic growth.

Last but not least, the idea to raise taxes when the economy hasn’t fully recovered from the pandemic recession is controversial, at least. Higher taxes will weaken corporate America and redistribute resources from the private sector to the public sector, negatively affecting the economy in the long-run. As well, I don’t believe that the tax revenues will fully finance the plan, so the fiscal deficits will increase further, ballooning even more the already mammoth pile of federal debt (see the chart below). 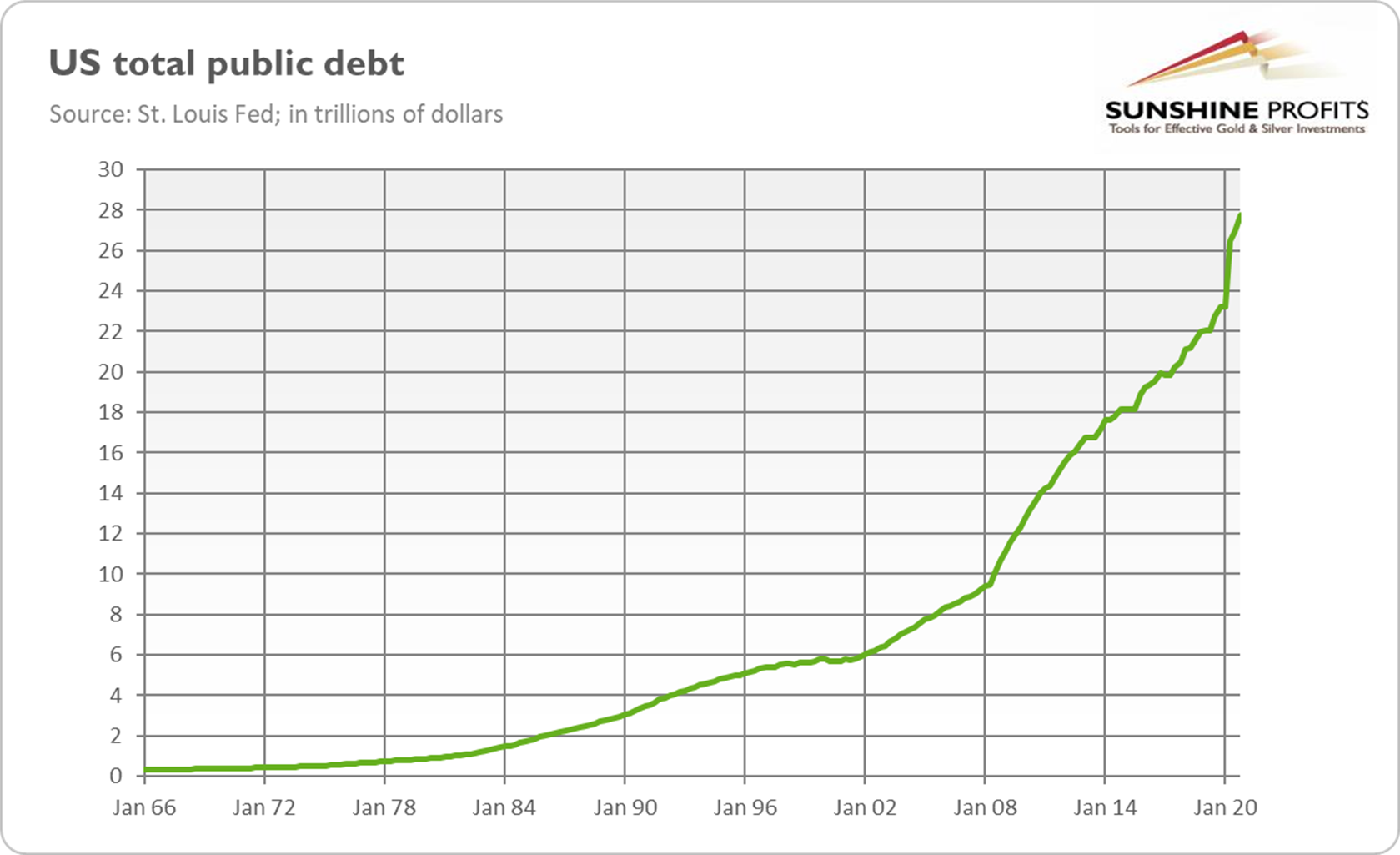 And how will Biden’s infrastructure plan affect the gold market? Well, in the long-run, higher government spending, public debts, inflation , and corporate taxes should hamper the pace of economic growth and weaken corporate America and Wall Street. Hence, the proposal could be positive for gold prices, at least from the fundamental point of view .

However, Biden’s bold actions seem to be welcomed so far by the financial markets. This is because the fiscal stimulus – and the rollout of vaccination – is strengthening the risk appetite. There are also hopes that the “go big” approach will allow the American economy to recover more swiftly than previously expected and quicker than its European peers. These expectations could propel the bond yields further up (see the chart below), also strengthening the U.S. dollar, and creating additional downward pressure on the gold prices . 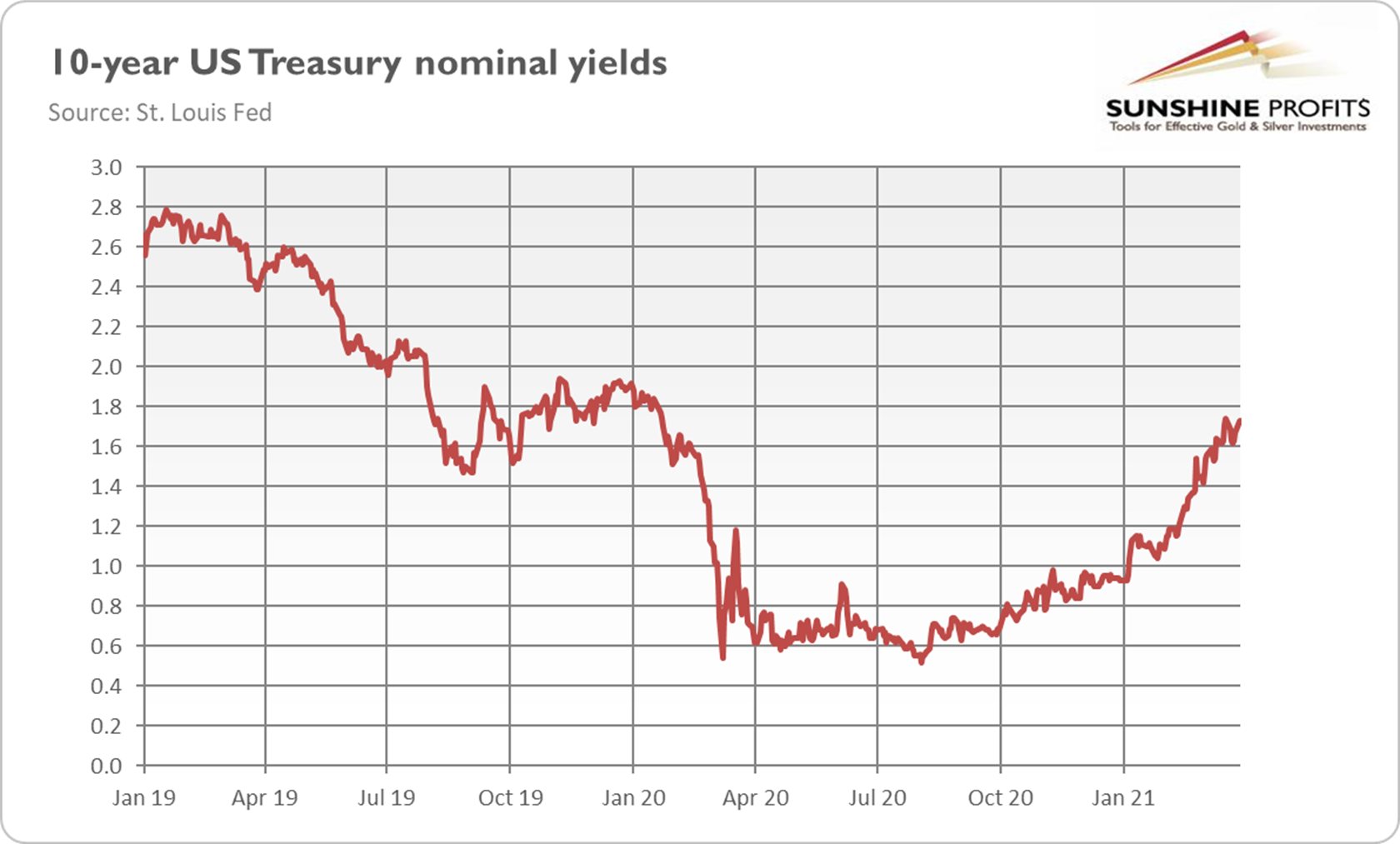 Therefore, although the Fed will have to step in and ease its monetary policy if the interest rates rise too much, the bond yields have room to move higher. This upward trend could continue to put gold under pressure , unless the yellow metal finds a way to diverge from its relationship with interest rates, for example, by attracting more investors worried about inflation.