Time for a market melt-up

While I cannot tell you with certainty that we are about to see a market melt-up, I can tell you that the setup is now in place to melt up to the 4400SPX region through the spring.

Before I go into my expectations, there are a few issues I would like to address, which seem to almost always come up in the comments section to my articles.

Many of you have taken strong exception to the fact that I really do not bother with the news. Your perspectives are often based upon your personal experience of seeing the markets move when news is announced. So, you assume that the substance of the news is always the driver of the market move. And, this makes you view my perspective as quite untenable.

So, allow me to explain my perspective in a bit more detail, and maybe you will begin to understand.

My perspective is that the news can act as a catalyst for a market move, but the substance of the news is not always determinative of the direction in which the market has been catalyzed by such news. Moreover, the market can certainly move without any news, which we have certainly seen many times when pundits cannot identify a reason for a market move.

One of my favorite Ben Franklin quotes explains how market participants do this all the time:

So convenient a thing it is to be a reasonable creature, since it enables one to find or to make a reason for everything one has a mind to do.

In fact, one of my favorite exhibits is this picture of Jim Cramer, which shows that the market had its best week in almost 100 years at the same time that we saw record unemployment numbers and the highest Covid related death numbers being reported. 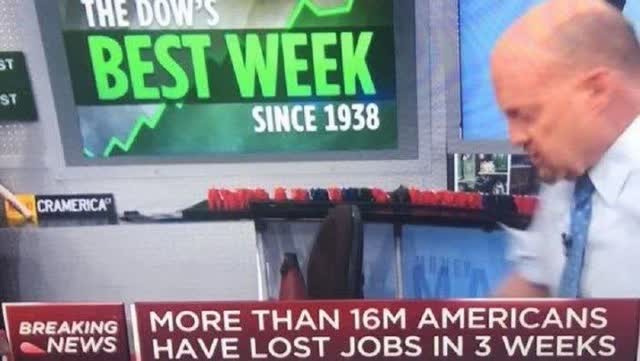 And, if you are honest with yourself, you have likely seen this occur many times throughout your market career (although not as starkly obvious as in this Cramer picture). In fact, we have all seen it occur many times. But, most of the time, many people make excuses or just shrug it off pursuant to the Franklin quote. But, you cannot deny it happens quite often, and you must honestly grapple with the reasons for it.

In my market perspective, again, the news can act as a catalyst for a move, but is not truly needed. (In fact, just last week I highlighted how the market moved over 3% without any related news catalyst).

The causes of these cyclical changes seem clearly to have their origin in the immutable natural law that governs all things, including the various moods of human behavior. Causes, therefore, tend to become relatively unimportant in the long term progress of the cycle. This fundamental law cannot be subverted or set aside by statutes or restrictions. Current news and political developments are of only incidental importance, soon forgotten; their presumed influence on market trends is not as weighty as is commonly believed.

Let’s take the coronavirus as an example. Back in February of 2020, I was highlighting how I see a set up for the market to drop 35%. In fact, I even outlined a short trade I was taking at the time with my ideal target being 35% lower.

At the time, we knew about the coronavirus and its potential to become a pandemic since December and January, yet the market was still levitating at its highs, unabated by this “serious” news. Have you ever considered why the market did not drop back in December or even in January when we knew of the potential for this to become a global pandemic?

But, the set up in market sentiment for a decline did not develop until February, when I outlined this potential to our members and in a public article. So, when the market declined into March, it was not a surprise to us, but everyone was certain that it only occurred due to the coronavirus. However, I viewed the coronavirus as a catalyst for the 35% decline I was already expecting, but I do not view it as a cause. If it truly was the pure cause, then we should have at least topped out in December or January when we knew about the coronavirus, especially under the majority understanding that the market reacts to expectations of the future.

Moreover, the S&P500 dropped almost exactly to the market support I cited 2 years before in the 2200SPX region (the bottom was 2192), and then began a strong rally. The fact that this rally took shape and continued unabated during the worst of the Covid death news, nationwide economic lockdowns, and record unemployment told us that the Covid news really was not at issue. In fact, that market rally shocked many who were following the Covid news cycle. Yet, while we dropped down into the 2200-2300SPX region, I was explaining to our members that this was a major buying opportunity and to ignore the horrendous news being reported at the time. And, this was well before the Fed even acted for a 4th time in the month of March.

The news was so bad at the time of this buying opportunity that even my wife questioned me “are you sure?” when I told her to put our children’s money in their 529 accounts back into the market. Again, tuning out the news cycle and focusing only upon where we resided within the sentiment trend was of utmost importance to being able to react appropriately within the market.

Elliott once wrote that “[a]t best, news is the tardy recognition of forces that have already been at work for some time and is startling only to those unaware of the trend.” Have you ever heard the phrase “news fits into the cycles?” Well, now you have a better understanding how this works in application.

And, by the way, the same analysis applies to Fed action. In my last article, I pointed out how the Fed acted 3 times to stabilize the market. And, each time the Fed acted, the market immediately dropped precipitously after the Fed actions. When they acted a 4th time and the market rallied thereafter, many of you noted that “it took time until the Fed actions actually had an effect.” Yet, you simply ignored the fact that the Fed could not stem the tide of the negative sentiment trend three times before.

My perspective explains this rather well. The Fed action was “discounted” during the negative sentiment trend. The market had to complete its negative sentiment trend into long-term market support (which coincided with our 35% decline target identified before the decline began) before it was ready to turn back up. And, as I noted last week, former Fed Chairman, Alan Greenspan, seems to agree with my perspective:

It's only when the markets are perceived to have exhausted themselves on the downside that they turn.

Now, with regard to the market trend right now, I think it is rather simple. Based upon the current sentiment structure as I interpret it, when the market gapped up on Monday over the 4050SPX level, 4010SPX then became our short-term support. I outlined this to the members of ElliottWaveTrader.net the prior week before the gap up occurred, with the move up over 4050SPX putting us in a potentially strong uptrend leg. And, as the week progressed with the market moving higher, I noted that as long as we remain over 4040SPX we are targeting at least the 4150SPX region next.

This brings me to a discussion of risk management. What has shocked me through my years of running my services is that many investors buy into the market and have no risk management strategy at all. In fact, many do not even understand what I am speaking of when I mention risk management. It generally means that if the market were to turn into a negative trend, you “should” be able to recognize it in enough time to be able to protect your portfolio.

We do this with the use of our Fibonacci Pinball methodology of Elliott Wave analysis. It provides for a standard and objective structure to follow in the market to maintain on the correct side of the market trend. And, if the market diverges from that standard structure, it provides advance warning that we may take a detour during which we may have to protect our profits earned within our portfolio.

As a recent example, I highlighted to our members, as well in a public article, that I was expecting a market pullback as we approached the 3980SPX region in mid-March. Moreover, I outlined that if the market holds 3850SPX on that pullback, then I expect us to resume a rally over 4000. However, if the market were to break down below 3850, then the market would have strong potential to drop down to at least the 3700SPX region before we began the rally over 4000.

As we now know, the market held 3853SPX, which kept us in our strong uptrend. In fact, the market has now rallied 280 points (7%) thus far off that low. So, for those that trade the shorter-term movements in the market, we had strong parameters to guide us through the recent market machinations. Should we have broken down below 3850SPX, then those that trade the shorter-term movements would have had the opportunity to protect their portfolios during a further 150-point potential drop. But, with the market holding support, we did not have to worry about any risk management actions. Yet, our plan had us well ready to act in either case.

As I have said many times before, this is no different than if an army general were to draw up his primary battle plans, and, at the same time, also draws up a contingency plan in the event that his initial battle plans do not work in his favor. It is simply the manner in which the general prepares for battle. We prepare for market battle in the same manner.

So, while I retain a bullish bias for the market as we head towards the fall of 2021, I still have to be aware of the potential risks for draw down. For now, the level at which we have risk of draw down is the 4040SPX support, which I will likely raise to 4070SPX in the coming week should we strike the 4150SPX region.

I hope this article outlines my general market approach and perspective a bit more clearly to all that read my analysis. Clearly, there are no guarantees in the market. Yet, we do have a rather accurate methodology, based upon probabilities, to guide us through market machinations without regard to the news cycles which can often confuse the masses to being on the wrong side of the sentiment trend.

While my perspective may be hard for you to accept from an emotional standpoint, I can assure you that those that have followed our work have reaped the benefits of being able to tune out the news cycle, and their investment accounts have equally benefited, as one of my members recently noted:

I know I fought this... but damn it works... My accounts are killing it... returns I did not think possible.

Teck reduces its 2021 zinc production guidance due to wildfires