With respect to this week's title, in each of the prior three missives we've anticipatively penned:

20 March: "So clearly we see Gold as on the go through here: 1800 seems quite reasonable as an initial goal, however the 1800s in general could well be fraught with much to and fro."

03 April: "This remarkable week of resiliency for Gold really fuels our recent reckoning that price is setting a near-term course for 1800."

Duly noted there, Squire, is your diplomatic use of the word "suggested". Typically when we talk "near-term" we're thinking out about a month's time. However should we behold 1800 Gold even by mid-year, no one is going to say boo about it: rather, they'll gladly take it.

Moreover in settling this past week yesterday (Friday) at 1744, price traded en route to as high as 1759, a mere 41 points below 1800. Further, given Gold's "expected weekly trading range" is now 61 points, 1800 is well within that range. Thus briefly here are Gold's weekly bars from a year ago-to-date, wherein a wee bit of sheer magnetism may be all that price needs: 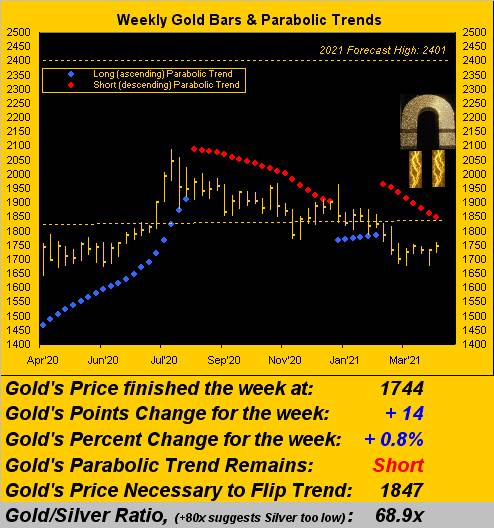 Now let's expound upon a driving Gold positive: this next bit is important. Any one who understands The Gold Story a wit (and that's you) already knows that price is significantly undervalued (our opening Scoreboard valuation now reading as 3759, which is more than double the present 1744 level). That 3759 valuation is being aided and abetted by an unconscionable creation of faux dough having increased the U.S. money supply ("M2") at an annualized rate within the last year of over 25%. Worse, the essentially infinite universe of the 3Ds -- Debasement, Debt and Derivatives -- is such that if we all simultaneously tried to convert our so-called "assets" into cash, 99% of us would receive nothing, i.e. zero ("0").

Again, you already know all that. So why isn't Gold already way up there? The market never being wrong, its offers taken and bids hit have rightly put price at 1744. But as is oft our wont to point out, perceived price is not veritable valuation. And to embark on the road up there, Gold really needs a positive catalyst, one that regrettably for many mainstream market analysts shall become the reality. And that is: there shan't be a materially-robust post-COVID economic boom. Sorry, but 'tis better to grasp that eventuality right now rather than later. And as such surprise sinks in, 'twill make Gold "real popular real fast" as we've seen in the past.

From our purview, this remains seemingly unconsidered across the financial spectrum. But we've herein hinted at it in recent weeks and upon it being realized could help propel Gold to 1800 ... to our forecast high this year of 2401 ... in time to our Scoreboard valuation of 3759 ... and beyond.

'Tis today comprehensively considered conventional wisdom that "if" or "when" post-COVID the economy "fully re-opens", that 'tis going to go upside gonzo nuts. "Straight up, baby!" 'Tis already been priced in a bazillion times over per the now 4128 level of the S&P 500, (which "if" or "when" halved would still be too expensive given its constituents' lack of earnings).

Oh yes: The StateSide private sector with some benevolent public sector sprinkling has been busy. To wit, here is an expanded edition of the Economic Barometer from January 2019-to-date, the Baro line itself coloured as "periwinkle" pre-COVID (through February 2020) and then as the usual navy blue-to-date. 'Tis darn stark in the chart that following the COVID bottom, the economy already has gone upside gonzo nuts. 'Tis what industrious folks cause to happen by dealing with the problem and then getting on with the program:

The point is: when the economy lacks puff moving forward, especially as higher minimum wages and higher corporate tax rates both exacerbate unemployment, the upside gonzo nuts shall instead be job cuts. And then 'twill be Gold that goes nuts! That's how we see it unfolding.

In fact, is the Federal Open Market Committee nervously seeing same, but not so saying? After all, Alternate Member Cleveland FedPrez Loretta "Jump Back" Mester notes that March's "great" payrolls report is not an incentive for the Fed to raise rates. As well, the FOMC's minutes of the 16-17 March meeting supports the ongoing dovish policies.

But perhaps the unmentionable through the hallowed halls of the Eccles Building is that "upside gonzo nuts" ain't gonna happen. Still on a broader basis, the International Monetary Fund is looking to 6% growth for the globe in 2021 which is pretty much on par with what the Atlanta Fed is expecting for the U.S. in Q1's annualized rate: we get its first peek in April's last week. Just be wary that the bottom line through this year's time may not be as fine. And that is a Gold positive catalyst.

Here's another one, technical in nature. 'Tis Gold's 300-day moving average which in bearish times keeps the lid on price, but supports same when the bulls (as now) are winning the game, (per last week's piece "Gold Buyers Own the Trading Volume"). And the penetration of the bright blue line within a bullish climb screams for it being buying time:

Drilling deeper into "The Now", here we've our two-panel graphic of Gold's daily bars from three months ago-to-date on the left and price's 10-day Market Profile on the right. The baby blue dots of linear regression trend consistency are resting upon their 0% axis, meaning that price today is basically where 'twas 21 days (one trading month) ago. The Profile is now indicative of trading support in the 1720s:

The same graphic for Silver is arguably weaker by the negative level of her "Baby Blues" (below left); however her price these past two weeks has been rebounding in stride with Gold. As well per our thought a week ago, she has now regained the 25s per her Profile (below right). C'mon Sister Silver and fix at 26! For by the present Gold/Silver ratio of 68.9x, Gold 1800 = Silver 26.12:

Finally, let's wrap it with something scary. Remember all those futuristic fictions such as Orwell's 'Animal Farm' and '1984', H.G. Wells' 'The Time Machine', Saul David's 'Logan's Run' (MGM '76), et alia? Well doggone if they ain't coming true. Clearly the public sector has gone Orwellian, the private sector is populated -- and worse more and more managed -- by Eloi (adults with the brain development of an eight-year old), and if you're over the age of 30, you're an unnecessary "has been". And now we've got The United States Department of the Treasury earnestly envisioning a "Global Minimum Corporate Tax Rate"?? To quote tennis great John Patrick McEnroe: "You canNOT be SERIOUS!!" Well, "Old Yeller" herself is taking it darn seriously as is the G20. And under what Global Law shall this be governed? Oh, they've not yet invented that, but 'tis coming? My oh my, we again ask: "Got Gold??" 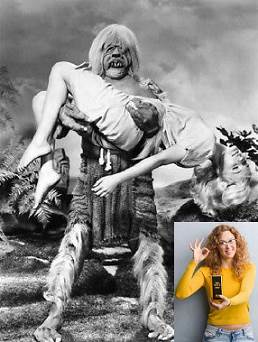