Gold futures have been in a defined and narrow trading range ever since hitting a high of $1759 on April 8. This high was hit after gold traded to a second low, or double bottom on the 30th and 31st of March. This follows the first low of the double bottom which occurred on March 8 when gold was traded to a low of $1673. The second low in the double bottom came in slightly above the former low at $1676.

Simply put, this shows that gold is still dominated by the bearish faction, with the bullish faction attempting to regain control now that we have had a higher low and a higher high than previous.

Today, gold futures basis the most active June contract gave up much of yesterday's gains. Currently, June gold is fixed at $1736.50, a net decline of $11.10. Today's close occurred just above the 21-day exponential moving average which is currently fixed at $1736 per ounce. Although gold has been trading sideways over the last eight trading days it is currently above the series of tops that occurred in mid-March. Our technical studies indicate that the selloff in gold which began at the beginning of January when gold was trading above $1940 concluded at the beginning of March. When the first lows of the double bottom occurred, that being said, momentum to the upside has been slow and tenuous at best but has the real potential to continue higher. 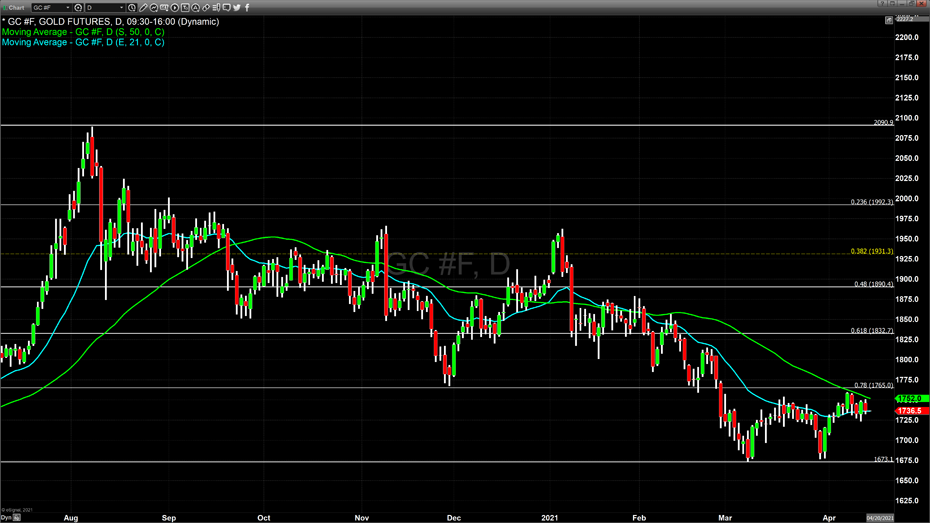 Resistance begins at gold's 50-day moving average which is currently fixed at $1753.90, with the next level of resistance occurring at which is the 78% Fibonacci retracement. The data set used for this retracement begins at the new record high at $2088 and concludes at $1673, the first low of the double bottom we spoke about above.

Chairman Jerome Powell spoke virtually today at the economic club of Washington DC. He addressed the concern that many economists have about the ever-growing national debt that has been created from fiscal stimulus as well as the monetary policy of the Federal Reserve. In response to these concerns Chairman Powell said that “The U.S. federal budget is on an unsustainable path, meaning simply that the debt is growing meaningfully faster than the economy. The current level of debt is very sustainable. And there's no question of our ability to service and issue that debt for the foreseeable future."

Although he said that there is no question that the Federal Reserve and U.S. government could service and issue that debt for the foreseeable future the fact of the matter is that current estimates put our expenditures in 2021 at 1.25% of GDP. That being said, it will be hard to fathom exactly what steps will be necessary to service the current level of debt. Also, any major change in interest rates would make that debt even more difficult to service. Many such analysts, including myself, continue to believe that we have not even begun to deal with the economic fallout that will follow our mounting debt. While all are in agreement that the current U.S. budget is on an unsustainable path, real solutions are needed, and no viable solutions have been presented.

Upside price action for gold, silver as greenback backs off