Welcome to a brave new world. History is unfolding before us as we witness the evolution and acceptance of cryptocurrencies within the global economy.

This week, Coinbase launched its much-anticipated Initial Public Offering; not only is it the world's largest digital currency exchange, but it is now the first publicly traded cryptocurrency company. This is an important milestone for the sector and is a testament to how quickly consumers globally have embraced digital currencies like bitcoin, ethereum, and litecoin, among others. 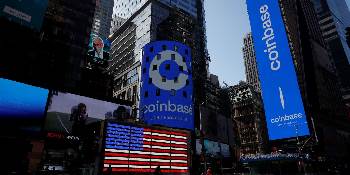 Last week, billionaire Bitcoin investor Michael Novogratz made headlines worldwide when he said in an interview on CNBC's "Squawk Box" that he was surprised with how fast the cryptocurrency is being accepted within the financial landscape.

"Adoption's happening faster than I predicted. It's shocking to me how fast people are moving into the system," he said.

Novogratz added that he thinks bitcoin is on track to eventually surpass the gold market's capitalization.

Novogratz is also not a lone voice in the pack. Goldman Sachs' CEO David Solomon told CNBC in a recent interview that he has also been surprised with the adoption of cryptocurrencies.

To put the pace of growth from cryptocurrencies into perspective, it has taken only 12 years for bitcoin to reach a market cap of $1 trillion. It took Apple 42 years; it took Amazon 24 years to reach that milestone.

But this market is more than just bitcoin. Famed investor and a member of ABC's Shark Tank Mark Cuban is paying more attention to Ethereum and thinks it will eventually surpass Bitcoin as the primary global digital currency.

"I think the application leveraging smart contracts and extensions on ethereum will dwarf bitcoin. Bitcoin, right now, has evolved to be primarily a store value, and it's very difficult to use it for anything else… You really have to work a lot harder on bitcoin than you do on ethereum," he said in an interview on the Unchained Podcast.

"In a few years, I think Ethereum and maybe 2 or 3 other blockchains will have their place, and those will be the winners," he added.

Major institutions and investors are paying attention to digital currencies, so we can expect to see further exponential adoption as consumers and merchants look for ways to protect purchasing power and for modern mediums of exchange.

When you look at all that is happening in the global economy and the evolution of technology adoption, it is not surprising to see consumers embracing cryptocurrencies as a form of payment and as an investment.

The Federal Reserve and other global central banks continue to downplay the looming inflation threat; however, companies that are having to buy expensive commodities are sounding the alarm bells, warning consumers that prices are going up.

The alarm bells are only going to get louder as the global economy recovers from the COVID-19 pandemic. There is renewed optimism that life will get back to normal and the economy will see robust growth this year. Still, we don't know what impact the unprecedented amounts of stimulus will have on the growing global deficit and global currencies.