Gold reversal? Have no fear!

S&P 500 closed in the the red, vindicating my bearish sentiment going into Monday's session. And as I have tweeted during the day, the sellling doesn't appear to be over. Friday's:

(…) selling wave before the close looks to indicate hesitation ahead. Even though VIX is attacking the 16 level, and the put/call ratio ticked higher, the bulls are little disturbed thus far.

While VIX rose yesterday, it finished only a little above 17 – the tide in stocks hasn't turned to fear even temporarily in the least, and the current consolidation would still be one to be bought.

That's the result of ample liquidity in the system, which is denting the rotations. Yields moved higher yesterday, and defensives including tech or Down Jones Industrial Average rightly felt the pressure more than value stocks.

Gold got caught in the daily selling, but again the miners and commodities reveal how little has changed. Oil and copper keep doing very fine, and the precious metals upleg appears undergoing a daily correction only – one that doesn't change the larger trend, which is higher (and for the dollar by the way, it's pointing down – I'm not placing much weight upon the USD link arguing that gold is acting weak to the weakening dollar, and thus has to fall). I look at the ratios, yields and other commodities for stronger clues.

And the matter of fact is that inflation expectations have yet again turned higher, confirming my earlier calls about transitioning to a higher inflation environment made either recently or more than a month ago. Remember that the Fed wants inflation above all, and made so amply clear:

(…) Now, it's up to gold and silver to catch up on what they missed since the early Aug 2020. Inflation is running hotter, and the Fed is tolerant of it, amply supplying liquidity. The gold bottom is in, and much brighter days ahead.

Gold in the Limelight

Gold's daily reversal may look ominous, but really isn't – it's merely a temporary setback. The miners have held up relatively well, and I consider the yellow metal's selloff as a reaction to the retreat in nominal yields and first red day in the S&P 500 in quite a while. I'm standing by the call of decoupling from nominal yields getting more pronounced, and by increasingly lower dollar values powering precious metals higher, especially in the second half of this year – the USD/JPY pair offers clearly clues for the king of metals even now. 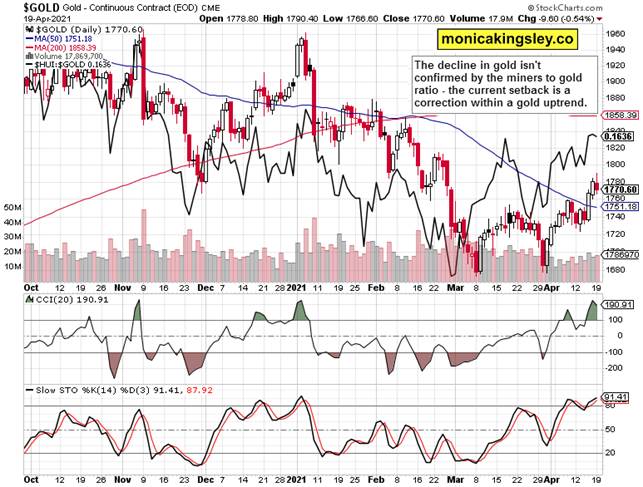 Look how stubborn the miners to gold ratio is – no, this precious metals upleg isn't ending here, no way, it's merely getting started, and the panicked bears doubling down this early from the imperfect second bottom, is telling you as much about the state of the market as the ongoing silver squeeze driving relentlessly PSLV stockpile higher, bypassing the SLV.

Silver retreated in tandem with gold but again the fierce copper (copper to 10-year Treasury yields ratio) reveals that this isn't a move to be trusted. The trend in precious metals remains higher.

Gold and miners are undergoing a shallow correction as well, but nothing more than that. Before too long, precious metals will shake off the setback, and revert to breaking above another resistance, the $1,800s. Since we broke above the two levels I discussed recently (the $1,760s and closing above $1,775 on solid internals), the lows can be comfortably declared as in across the precious metals board, and I look for miners to keep leading the upleg.

The S&P 500 consolidation is here, and is a shallow one just as anticipated. The risk-off moves were evident across the board yesterday, and might very well not be over just yet (when looked at from a larger than daily perspective).