Traders continue to focus on the recent double bottom in gold

As of 5:15 PM EST, gold futures most active June 2021 Comex contract is currently fixed at $1779.20, which is a net gain of $8.60. The June contract did trade to a lower low than yesterday, hitting $1763.50 on an intraday basis. Gold also traded to a lower high when compared to yesterday; however, it closed solidly above Monday’s settlement price. 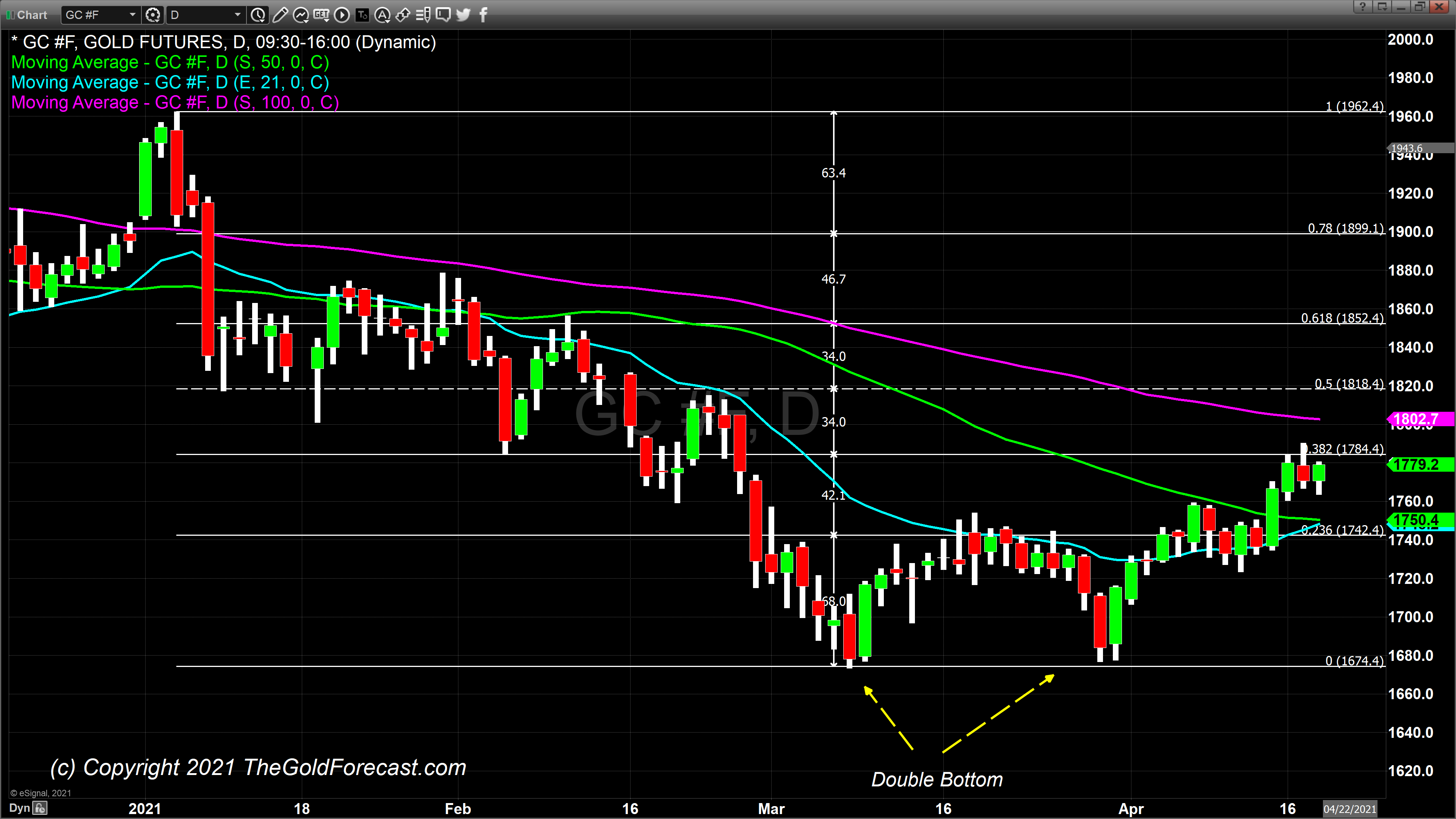 It was buying by market participants that resulted in today’s price advance. It can be clearly seen when we look at current spot or forex gold prices through the Kitco Gold Index (KGX). Spot gold is currently fixed at $1778.80, after factoring in today’s price advance of $6.80. However, dollar strength resulted in a decline of $2.35, with market participants bidding the precious yellow metal higher by $10.10.

A major factor that definitely influenced market participants buying was a slight down-tic in the yield of 10-year notes, which are currently fixed at 1.56%. The ten-year note was fixed at 1.59% yesterday, so today’s fractional decline in yield certainly got the attention of gold traders.

Market participants are reacting to fundamental news as well as a strong technical identification of a double bottom. As we had spoken about on many occasions, lows that occurred on March 8, when traders took gold pricing to a low of approximately $1674, tested the fortitude of the bullish faction’s belief that gold pricing was oversold. This resulted in a rally that was short-lived. The first attempt of a rally failed at approximately $1742. On March 31, the lows of March 8 were retested, creating a double bottom as gold prices declined from $1742 to a low of $1678 at the end of March.

On April 1, traders moved gold pricing above the bottom that occurred on March 30 and 31st, taking gold futures to approximately $1730. Gold continued to make higher highs throughout the first week of April before consolidating and trading sideways with resistance between $1750 and $1760 up until the end of last week. On Thursday, April 15, gold scored dynamic gains of approximately $28, which broke above the consolidation that occurred during the first two weeks of April. This was followed by a $10 gain on Friday, April 16.

Gold closed lower yesterday; however, it did trade to the highest intraday high of $1790 since the lows of the double bottom before settling at $1770. Today’s additional gain took gold pricing to $1779.20. Our technical studies indicate that there is minor resistance at $1784 based upon the 38.2% Fibonacci retracement. There could be major resistance at $1802, which is based upon the 100-day moving average.