We begin by quoting the late Hervé Villechaize as Nick Nack in the film 'The Man with the Golden Gun' --[United Artists, '74]: "So near... and yet so far..."

...that has "Triple Top 'n Pop" written all over it. And you already know from your dog-eared paperback copy of 'Traders’ Truthful Tenets': "Triple Tops are meant to be broken!" Thus we look to 1800+ in the new week and in turn the opportunity for Gold's weekly parabolic trend to flip from Short to Long at 1820. "Roar!" goes the bull.

Animal audibles aside, Gold settled yesterday at 1777, (a whopping one point net loss for the week). Moreover, 'twas Gold's third consecutive week of recording both higher lows and higher highs. To which the contrarian may say: "Well, it has to go down then." To which the trend follower may say: "There have been six, seven, and even eight consecutive weeks of both higher lows and higher highs on multiple occasions across the past 20 years." But bless the dear Shorts, for we need them to take the other side of the trade. And right now for Gold, 1800 is all but made.

Further as just mentioned, should 1820 trade in the new week, Gold's parabolic trend per the following chart of weekly bars shall flip from Short to Long. At present, Gold's expected daily trading range is 24 points, and its expected weekly trading range is 58 points. Thus in that vacuum, 1800 is within a day's range, and 1820 is within a week's range, (barring the Shorts spoiling the party): 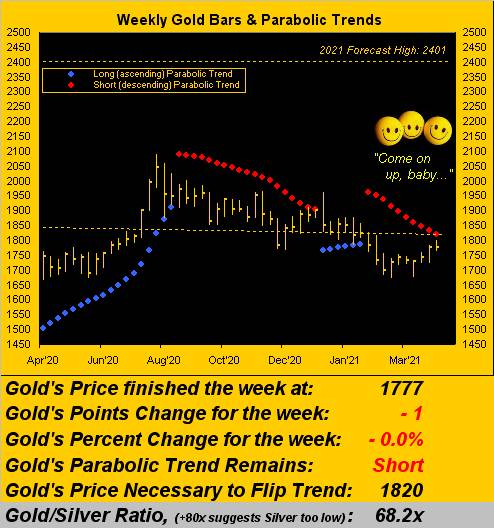 In fact, should you be planning for the flip to Long, there've been since the year 2002 a total of 42 weekly parabolic Long trends. The "median maximum" price increase for Gold across those 42 occurrences is +9.1%. So in that vein, should Gold's weekly parabolic trend flip to Long in the new week at 1820, a median repeat performance of +9.1% would eventually put price up to 1986. Yes, that pales in comparison to our call this year for 2401: but 'twould be a lovely upside lurch en route. (And for those of you fortunate to be scoring at home, the median duration of those 42 Long trends is 11 weeks: 'tis thus conceivable by those yardsticks that we'll again see Gold 2000 by July: don't forget to tell your friends).

As bereft was incoming data for the boppy Baro this past week, its few reports were firmly led by March's New Home Sales topping the one million mark for just the second time in better than 14 years: that means one in every 328 Americans bought a new home in March, a fairly dazzling statistic.

"Well mmb, Americans are flush with cash from all the COVID handouts..."

So we're told, Squire .. and so as well are we thereto dubious. Since the start of COVID crackdowns, the United States Department of the Treasury has issued an all-in total of $370 billion to the nation's population of 328 million. That's an average of $1,155 per man, woman, other and child. "Hey Mabel! We got an extra two grand! Let's go buy a house!" (Uhhh... no). As well, March's lagging report of Leading Indicators rose, (but you already knew they would, given you follow the Econ Baro).

Thus the big bee in our butt remains the unconscionable level of the S&P 500. Our honestly-calculated "live" price/earnings ratio per the website is now 77.5x, which from "The Broken Record Dept." is nearly four times what was taught in business school as "expensive". But wait, there's of course more: per the site's S&P Moneyflow page, whether on the weekly, monthly or quarterly basis, the moneyflow is not supportive of the Index's level (4180); indeed by that quarterly measure, the S&P 500 is nearly 400 points "too high". Another measure is that of the S&P's Futures at present reading 190 points above their smooth valuation line as shown on the site's Market Values page. Again, that's really scary stuff if you own stocks, (save, naturally, for those tied to precious metals).

Even more broadly, we're reminded of a very valued friend and charter reader of The Gold Update who less than two years ago -- way back there at S&P 3000 -- was suggesting a 50% correction to be in order, (similar to that of the DotComBomb during 2000-2002 and the GlobalFinFlop during 2008-2009). At the time, we thought our friend's -50% notion was a bit excessive; now we view it as realistic. Recall, too, we've another long-time and extremely successful trading colleague engaging in put options sub-S&P 2000. On verra: but when it all goes wrong, hopefully you'll have "Got Gold!" Across of all the prior stock market crashes we've witnessed, never have we seen valuation excesses such as those today. Or as our great colleague here says: "I've run out of words."

Meanwhile as the States seemingly are climbing out from COVID, such seems not the case elsewhere. On this side of The Pond 'tis reported that institutional demand for lines of credit and loan facilities has now fallen for three straight quarters. New COVID case rates according to the government agency Santé Publique France alone doubled during April from the pace during this year's first quarter. With both economic statistics and yields on balance having risen in the U.S., one wonders how much longer the €uro (at present $1.21) can stay afloat: 'tis up 13% from its COVID depths of $1.07 during March 2020. "We'll bid but one buck, please!"

Escaping from their own recent depths are the precious metals. First, here we've Gold's two-panel graphic of its daily bars from three months ago-to-date on the left and 10-day Market Profile on the right. The baby blue dots of linear regression trend consistency having essentially arrived at the +80% level confirms that the uptrend is indeed just that: consistent. As for the Profile, the days of the 1600s seem passé, supportive of our notion from a month ago that, with hindsight, 1673 may stand as this year's low:

Very similar is the two-panel state for Sister Silver with her "Baby Blues" (at left) for the past three months now kissing the +80% level and Profile (at right) showing 26 as near-term support:

Now the fundamental highlights of the ensuing week include 12 incoming metrics for the Econ Baro (most of which are expected to be improvements), plus the Federal Open Market Committee's gathering on Tuesday and Wednesday. Dare they make a market scare? (Probably not...) Rather, let's focus on Gold's Triple Top entrée to 1800!

In closing we've the following unsolicited recommendation. We recently were privileged to meet Alex Krainer and read his book "Mastering Uncertainty in Commodities Trading: Generating sustainable profits in forex, commodities and financial markets through trend following". The book was actually published back in 2016, but 'tis more apropos of today's markets than ever. If you are fascinated by following markets and applying the elbow grease to be successful in trading and investing, we really recommend reading this book. Indeed, its readability is wonderful: the chapters are succinct and the sentences breeze by. The content is supported throughout by classically analogous quotations, fine footnoting, graphics and engaging wisdom not without wit, (his commenting for example with respect to the work ethics of algorithms being such that they "don't get tired, call in sick, take vacations or ask for a raise.") If ever you've had the hankering for systematic market engagement, this book is for you. 'Tis truly a worthwhile read, (emphasis on "worth"). A big tip of the cap to Alex! 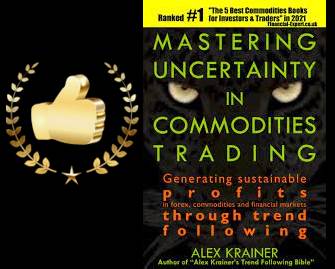