Modern Monetary Theory or MMT, as it's better known, is a recurring theme that's not likely to go away.  However, there's nothing modern about it, it's not about money (it's about currency), and it's no longer a theory.

We've certainly not heard much about it in mainstream economics or investment publications.  But I do think it's gaining traction.

In my view, MMT is a very big deal because of its massive implications to our economic future.  And so, I think it's worthwhile having at least a basic understanding of the concept.

In fact, if you're reading this, odds are good you've at least heard of MMT and you may have some idea of what it's about.  If that's the case, you probably understand better than most the importance of investing in hard assets that can't be inflated at the whim of central planners.

And right now, the two most undervalued hard assets remain gold and silver.

Some say, and I agree, we don't live in a true free market society.  In many ways, that's been especially so since the U.S. central bank, the Federal Reserve, was established in 1913.  I could certainly go into a whole long discussion about the Fed and its roles and mandates, but that's a topic worthy of its own essay.

MMT was first introduced by American economist Warren Mosler in the early 1990s.  It has gained a lot of traction in recent years, championed in particular by Stephanie Kelton, economics professor at SUNY Stony Brook.  Kelton authored the book The Deficit Myth: Modern Monetary Theory and the Birth of the People's Economy.  Kelton was also an advisor to Bernie Sanders's 2016 presidential campaign, and a former Chief Economist on the U.S. Senate Budget Committee (Democratic Staff).

For the purposes of understanding MMT, suffice it to say that because the Fed sets interest rates, we don't have a free market in one of the most basic and pervasive aspects of our lives: money.  Actually, a better word is currency, because money is supposed to have intrinsic value.  And today's fiat dollars only have value because central banks issue them and government decrees say we have to accept them.

So, if interest rates are set by a central authority, the central bank, then the market for currency is not free, as they are deciding at what rates currency is to be loaned out.

Interest rates are essentially the "price" to borrow money or currency.  In a free market, that price should be set between the lender and the borrower.  In fact, rates set by central banks are used as the barometer for banks and businesses to establish contracts and make economic projections.  So, you can see how this makes its way through the economy and skews nearly every aspect of our lives.  That's why I feel that we don't live in a free market, and haven't for a long time.  Anyways, back to MMT.

MMT is the idea that federal spending is not limited by revenues: printing money is a tool to be used to help a country deal with its economic issues, and that it will not automatically trigger inflation or currency devaluation.  Proponents believe governments who print and spend their own currency should not be limited in their spending to avoid deficits and a growing debt.  They say deficits and debt don't matter unless they begin generating inflation.

Not the Real World

It needs to be pointed out here that this is a departure from the way the rest of the world works.  A company or an individual cannot operate on that basis.  Firstly, they don't print their own money and so they don't have that luxury.  They also cannot borrow to infinity because at some point creditors will force them into bankruptcy.

That exact scenario can't happen with a country, because MMT says it can just keep printing its currency to pay for spending and to pay interest on debts.  But in fact, it's a vicious circle in which the public eventually loses confidence.

If you look back throughout history, fiat currencies have all failed eventually, with the typical "world reserve currency" lasting about 100 years on average. 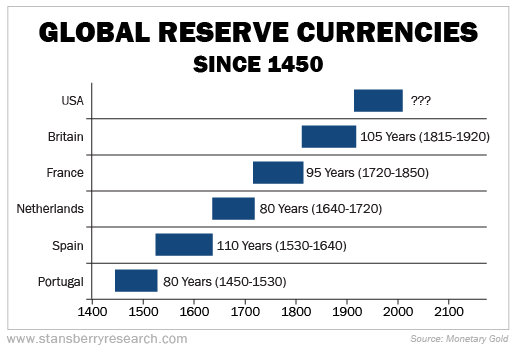 Looking at the above chart, and if history repeats or at least rhymes, then the current reserve currency, the US fiat dollar, has already overstayed its welcome.

We don't need to look too far to see concrete examples of this.  In the late 1990s to mid 2000s, Zimbabwe printed endless Zimbabwean dollars to pay its bills.  Eventually, they ended up with 100 trillion-dollar bank notes.    Their currency became so worthless, no one wanted it.  Something similar has been happening in Venezuela, which is dealing with hyperinflation to the tune of over 10,000% per year thanks to a badly mismanaged economy rife with price controls. Nearly 80% of Venezuelans can't afford basic food, while 95% of households live in poverty.

Proponents of MMT see the treasury and central bank as one. They argue the central bank is there to print whatever the government needs, while the treasury's role is to collect taxes and allocate funds to various departments which spend it according to their budgets.  Anything needed beyond what's collected in taxes is simply printed into existence to makeup the shortfall.

One thing to keep in mind is that central banks only control short term rates.  For the most part, long term rates are determined by the market.  And that's where inflation fears will often show up first.  That's likely what we've been witnessing over the last several months in U.S. long-term Treasuries, whose yields have risen dramatically.  In effect, the market is saying those bonds are now worth less, which pushes up their yields, as it senses higher inflation on the horizon.

MMT advocates say even if people lose confidence in their currency, they can't simply abandon it as they need it to pay their taxes.  But if the government can print all it needs, why even bother to collect taxes?  MMT thinking says that if inflation shows up, the government can then increase taxes to cool things off, making them a necessary part of the equation.

Though these days central banks have certainly lost a lot of the public's confidence, the little that remains is partly from the "perceived" independence they have from the central government.  MMT would do away with that, and markets would likely quickly lose confidence in the central bank.  As a result, inflation expectations would probably soar, and interest rates would follow.

A good example of this is what just happened in Turkey.  President Erdogan replaced the central bank governor two days after he hiked interest rates to curb inflation (running at 16%) and the weakening currency.  Erdogan has been repeatedly calling for lower interest rates.  After replacing the central bank governor, the lira plunged to record lows.  Simply put, the market lost confidence… quickly.

Gold and Silver: Enemies of MMT

There's another consideration too.  Gresham's Law tells us that bad money drives out good.  Some of you may remember, or at least know that, prior to 1965, quarters and dimes in the U.S. contained 90% silver.  The treasury did away with those because silver had become too valuable.  Naturally, those coins disappeared from circulation as people hoarded, keeping them for their silver content.

While there's no silver in our currency today, that doesn't mean people aren't aware that dollars are being rapidly debased.  We only need to look at record high real estate prices, stock markets and cryptocurrencies to see that people are anxious to trade dollars for assets that have value they feel can protect them from inflation.

And it's why we've seen commodities, gold and silver rise dramatically in the past year.  It's also why we've seen shortages, delivery delays, and huge premiums on coins and bullion bars at precious metals dealers.  People are catching on, and they are trading their fiat currency for things of inherent value.

The way I see it, MMT is going to be popular with future governments as they come to see the potential of limitless spending on all their favorite pet projects.  The masses, despite little understanding, will come to accept MMT as a great new economic paradigm that will allow them to get all the "goodies" that governments will be happy to provide, in return for votes.

In the end, it's important for you to know MMT will only exacerbate and accelerate the overspending problems we have today.  So now that you hopefully understand MMT a bit better, and how it's supposed to work, you can see it with a more critical eye.

I call it Medieval Monetary Theory because there's nothing new about it.  Currencies have been massively debased for millennia; each time leading to detrimental outcomes.

In the Gold Resource Investor newsletter, I provide my outlook on which resource stocks offer the best prospects as this bull market progresses. I recently added a low-risk, deep value gold royalty company to the portfolio which I believe has exceptional potential to outperform its peers in the next 12 months.

Now's the time to prepare for MMT's inevitable effect of driving precious metals and commodities much, much higher.