Gold can't wait to fall - even without USDX's help

Gold started its decline without anyone's assistance. And when the USDX takes off, that downhill tumble can only increase.

The USDX declines and the precious metals sit by idly, twiddling their thumbs. If they had the strength that's being talked about, they should be soaring by now, or getting ready to. So, what's their problem?

Let's start by looking at the USD Index. 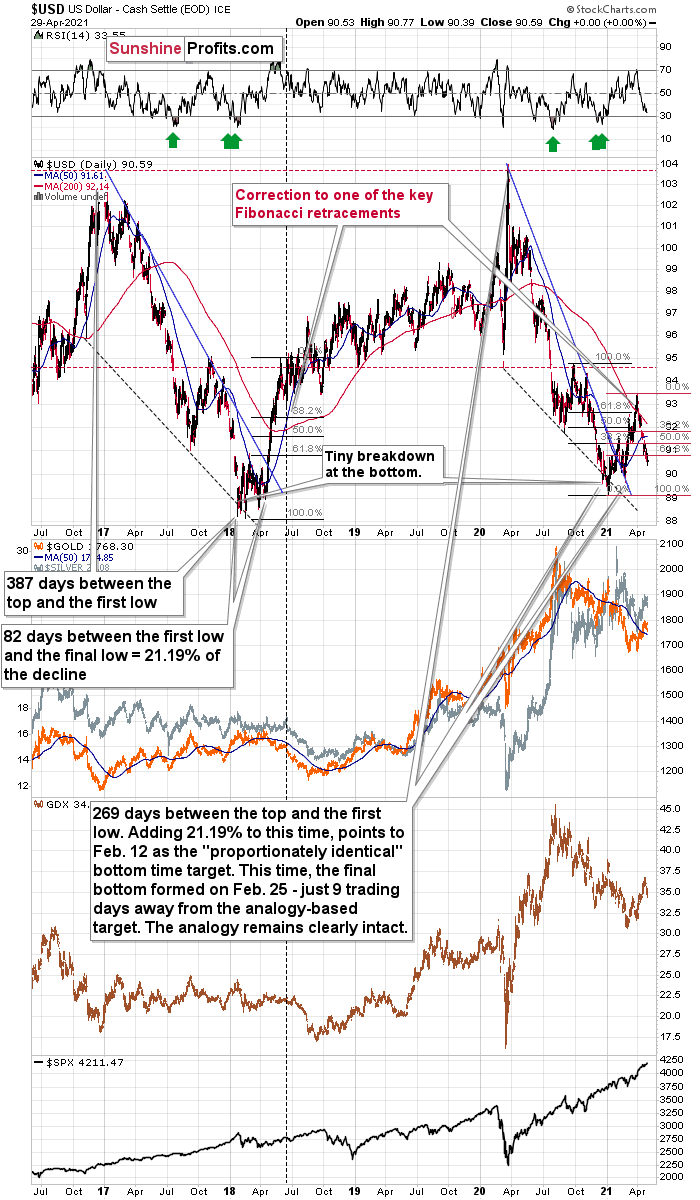 On the above chart you can see that this week, the USD Index broke to new monthly lows. And you can also see that gold didn't move to a new monthly high. In fact, it was not even close to doing so – it just closed the day below $1,770. This is a clearly bearish sign for gold.

And what about the USD Index? 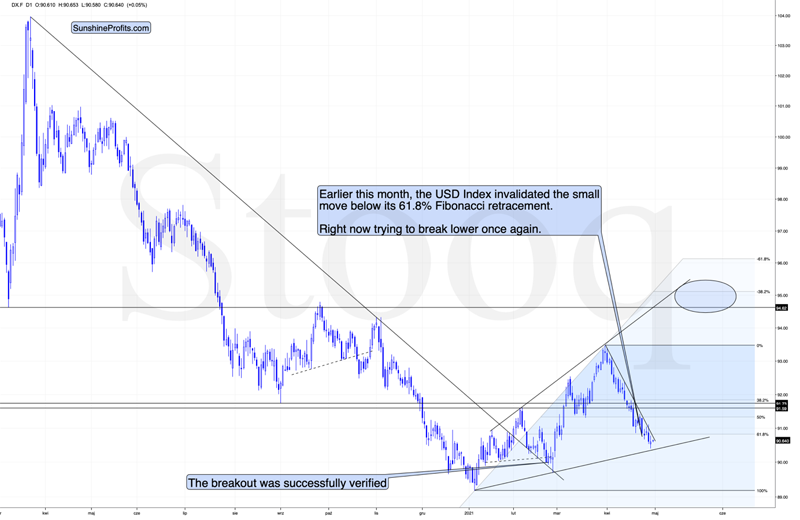 It's making a second attempt to break below its 61.8% Fibonacci retracement level. Will it be successful? It might be, but… Another support level is just around the corner. Perhaps the proximity to the rising support line based on the January and February lows was actually enough to trigger the rebound yesterday. In this case, the bottom in the USDX is already in. But, we'll know with much greater certainty when the USDX finally breaks above the declining resistance line and then confirms this breakout.

On the above 4-hour USD Index chart we see that the previous short-term breakout was invalidated, which triggered a substantial sell-off, but… Whatever was likely to happen based on this invalidation seems to have already happened. And it seems that we're about to see another attempt to break higher. Will the USD Index be successful this time? That's quite likely, but that's not the most important thing from the precious metals investors' and traders' point of view.

The key thing is that during the recent declines in the USDX (and during the move to new highs in case of the general stock market), gold , silver, and mining stocks didn't soar. They "should have" if the situation was normal or bullish. They declined instead, which means it's highly likely that even if the USD Index doesn't break out now (but a bit later), the decline in the PMs will not be avoided but only delayed.

In fact, to be more precise, it's unlikely to be delayed as well – what might be delayed is the increase in the pace at which gold, silver, and miners are about to slide. After all, gold and gold stocks are already moving lower (while silver is trading sideways).

By the way, silver's lack of movement recently is perfectly normal in the early stage of a decline – the white metal tends to catch up big-time in the final part of a given move. 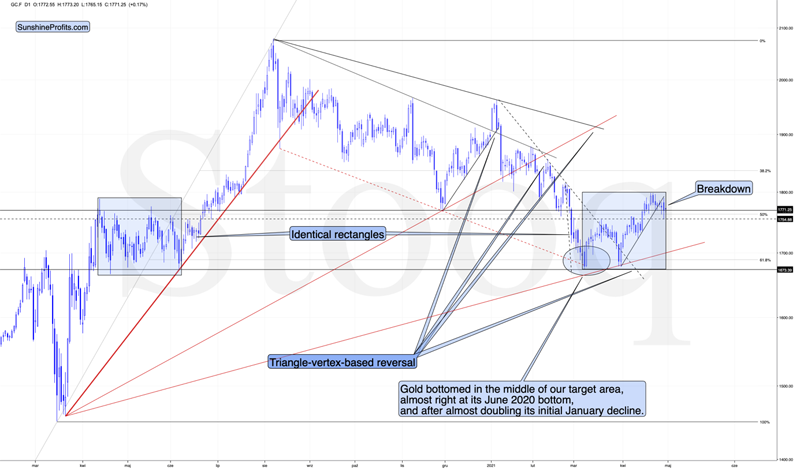 On the above gold chart, you can clearly see how gold moved back up to its rising short-term resistance line this week, and – instead of invalidating the breakdown – it bounced from it and declined once again. This is what verifications of breakdowns look like.

Also, let's keep in mind that the situation now seems to be a mirror image of what we saw in April – June 2020, and at the same time it's somewhat similar to what we saw at the beginning of the year. You can see the former (the rectangles are identical) on the above chart, and you can see the similarity to the early January action below. 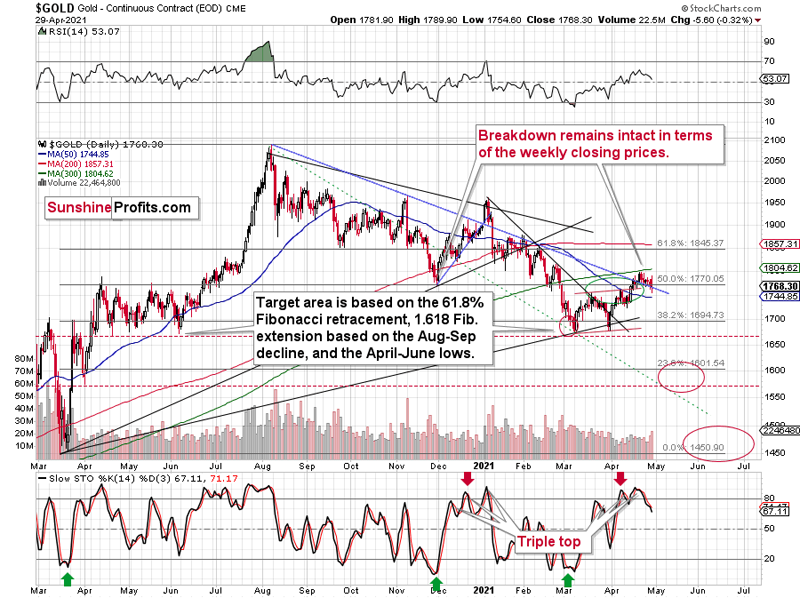 Just as was the case in early January, we first saw a pause – a rebound – and the decline continued only thereafter. It seems that the Jan. 7, 2021 price action is quite similar to what we saw yesterday (Apr. 29). Moreover, please note that both happened just above the declining blue support line. It was the final pause before the move higher was invalidated.

Having said the above, let's move to gold stocks: 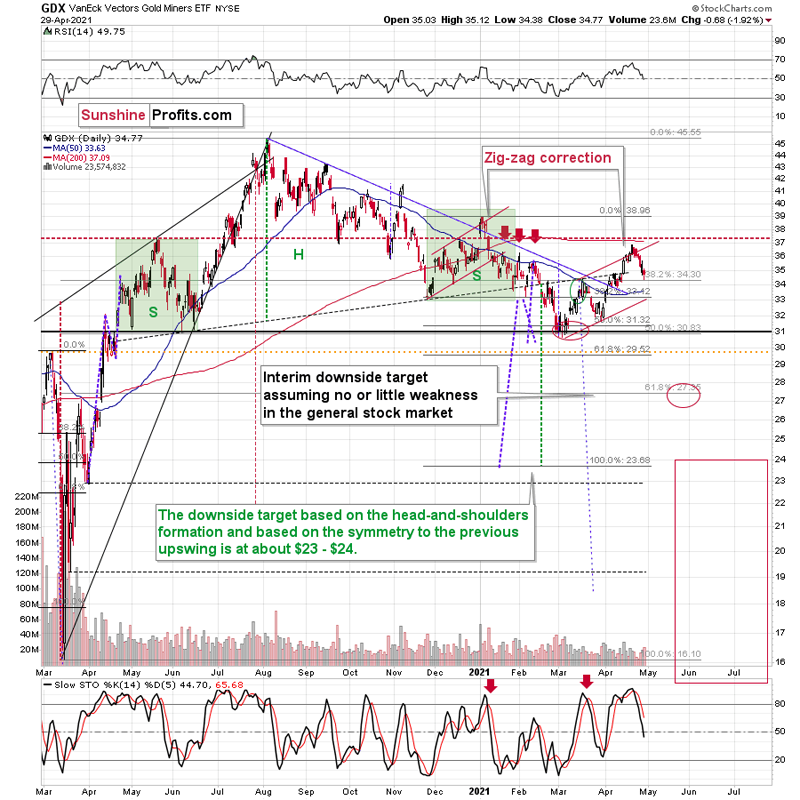 In yesterday's analysis, I described the GDX's previous performance in the following way:

Gold stocks' intraday recovery that we saw yesterday may seem profound, but not if we consider what happened in the USD Index and the general stock market. The former declined substantially while the latter was close to its all-time highs. This is a combination of factors that "should have" made gold miners move to new highs – and a daily gain of less than half percent is a sign of weakness, not strength.

In today's pre-market trading the S&P 500 futures moved to new highs, and gold miners showed gains in the London trading, but they are nothing to write home about – and more importantly, nothing that would change the bearish forecast for gold I described more broadly previously .

The bearish interpretation of the previous "strength" turned out to have been correct – the GDX ETF declined yesterday.

The decline was even more visible and important in the case of the GDXJ ETF, where we have trading positions. 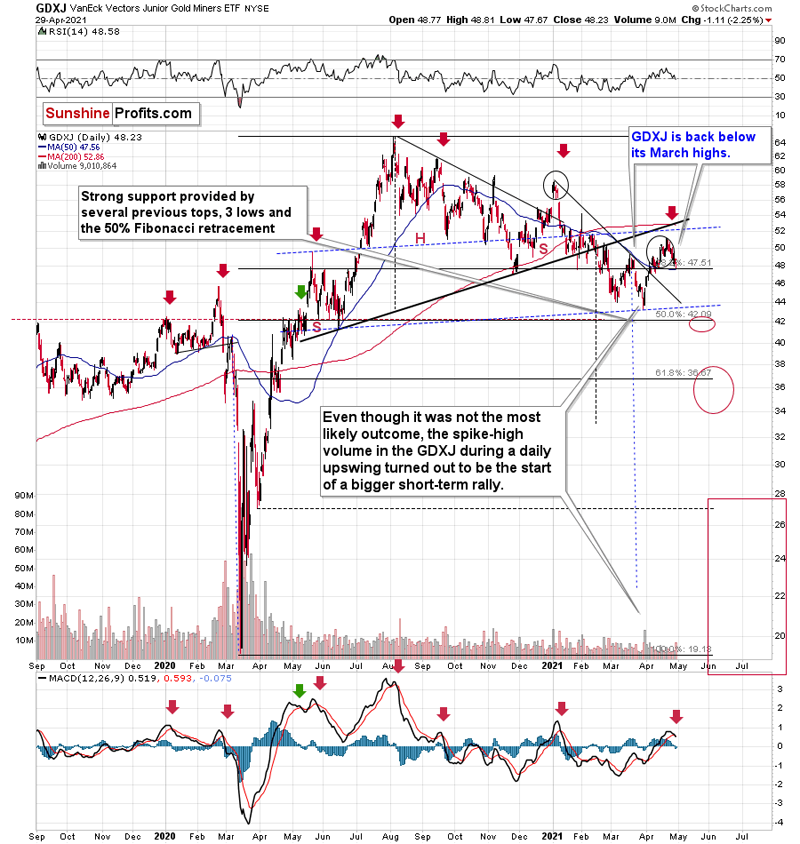 This ETF for junior gold and silver miners ( gold miners have much bigger weight in it, though) moved and closed back below its March 2021 highs.

Consequently, we have a situation in which:

The above combination tells me that we are very well positioned in case of our short position in the GDXJ.

Besides, as an analytical cherry on the bearish GDXJ cake, please note that we just saw a sell signal from the MACD indicator (lower part of the chart) while it was visibly above 0, and after a relatively big short-term rally. We saw this kind of performance only several times in the previous year, and it meant declines in almost all cases. We saw it only once before this year – in early January, and a sizable decline followed.