Although spring has begun, we can still find ourselves in winter, or even summer. Gold may benefit from such a seasonal aberration.

Oh, how wonderful, spring has finally started, hasn't it? We have April, after all. Well, in calendar terms, it's indeed spring, but economically it can be summer already or still the beginning of winter. How so? I refer here to Kondratiev cycles (also known as Kondratieff cycles or Kondratyev cycles).

As a reminder, Nikolai Kondratiev was a Russian economist who noted in the 1920s that capitalist economies experience long super-cycles, lasting 40-60 years (yup, it's not a very precise concept). His idea was that capitalism was not on an inevitable path to destruction, but that it was rather sustainable and cyclical in nature. Stalin didn't like this conclusion and ordered a prison sentence and, later, an execution for Kondratiev. And you thought that being an economist is a boring and safe profession!

The Kondratiev cycles, also called waves, are composed of a few phases, similar to the seasons of the year. In 2018, I defined them as follows:

So, which phase are we in? That's a very good question. After all, the whole concept of Kondratiev cycles is somewhat vague, so it's not easy to be precise. But some experts believe that we are likely in the very early part of the winter after a very long autumn . Indeed, there are some important arguments supporting such a view.

First, we have been experiencing a long period of disinflation (and later just low inflation), a decline in the bond yields , and economic growth fueled by debt. I refer here to the time from the end of the Great Recession until the Covid-19 pandemic , but one can argue that autumn lasted since the early 1980s, when both interest rates and inflation peaked, as the chart below shows. 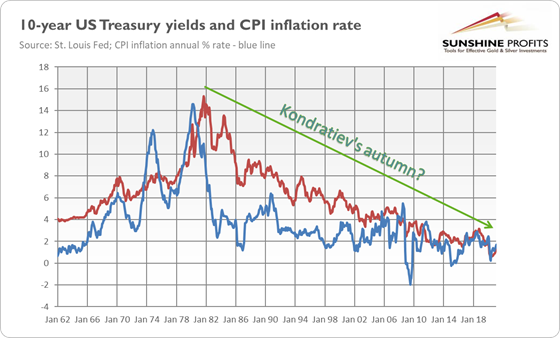 Second, winter is believed to be a depression phase with stock and debt markets collapsing, but with commodity prices increasing. And this is exactly what we are observing right now. I refer here to the rally in several commodity prices. This is at least partially caused by the disruption in the supply chains amid the epidemic in the U.S. and worldwide pandemic, but if the bull market in commodities sets in for good, this could be a negative harbinger for the stock market. After all, more expensive raw materials eat into corporate profits.

Third, winter is thought of as a period that tears the social fabric of society and deepens the inequalities. The data is limited, but the coronavirus crisis has been one of the most unequal in modern U.S. history, as its costs have been borne disproportionately by the poorer parts of society that have been unable to work online.

So, "winter is coming" may be a belated warning, as winter could have already begun. Later during this period, we could see bankruptcies of firms and financial institutions, and even some governments, as a delayed consequences of the coronavirus crisis. This is bad news for the whole of Westeros and its economy, but good for gold. Investors who don't like the cold should grab a golden blanket to hedge them from the winter.

However, in 2018, I expressed the opinion that summer may come in the 2020s, as the debts are rising and the inflationary pressure is growing:

As the global economy recovered and now expands, inflation is low, while stocks still rally, we enjoy spring. This is why gold has remained in a broad sideways trend in the last few years. However, as we are on the edge of the next technological revolution, confidence is finally rising and there are worries about higher prices, and we could enter the summer phase in the not-so-distant future.

And I still believe that my opinion makes sense. Indeed, after the global financial crisis of 2007-9, we have seen several spring features: low inflation, a bull market in stocks, and a low level of confidence (after all, there was "the most hated rally in the stock market"), which was a legacy of winter, i.e., the collapse of Lehman Brothers and the following economic crisis .

And summer is generally a period of stagflation, which is exactly what I'm expecting. You see, after a strong economic recovery in the nearest quarters, the U.S. economy is likely to return to a mediocre pace of economic growth, but with much higher inflation. After all, there is strong monetary and fiscal stimulation ongoing right now, another feature of summer. Meanwhile, winter is generally a deflationary period, so the specter of inflation rather suggests that summer may be coming and investors should hedge themselves against waves of gold.

Luckily, gold offers its protection not only against winters, but also against summers . Indeed, gold performs the worst during autumns, when there is disinflation, like in the 1980s and the 1990s, and the best during winters (due to the economic crisis – remember the 2000s?) and the summers (due to high inflation – remember the 1970s?).