The next move in precious metals

The rebound in Gold and gold mining stocks has been weak.

Gold hasn't even hit $1800 yet, and GDX and GDXJ sputtered at the first sign of resistance. In addition, their weekly closes have been weak, and they failed to hold most of April's gains into May.

Monday's pop aside; there has not been much to be excited about.

From a technical standpoint, Tuesday’s downside reversal reinforces that the oversold rebound in the gold stocks could be over. 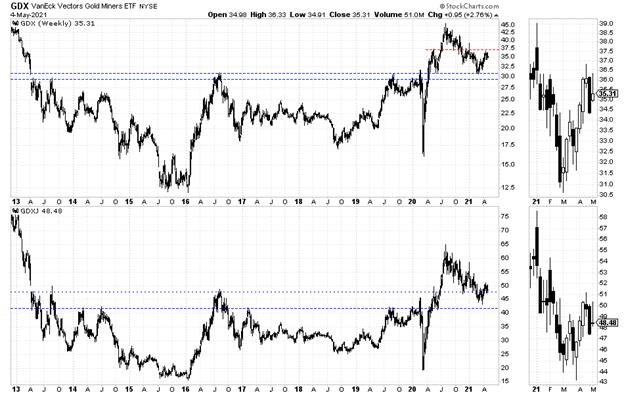 My chart of leading indicators for the sector reveals the underlying weakness in the sector.

Sure, gold stocks have outperformed Gold, but their other metrics have been weak.

Even as Gold rallied over $100/oz, the GDX advance-decline line sits at the March low. GDX has outperformed the S&P 500 only slightly, while Gold made a new low relative to the stock market in April. 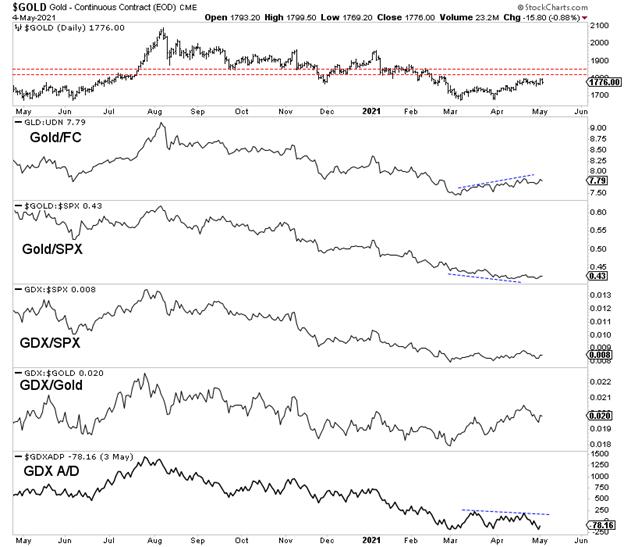 That is not exactly the picture we hope for if the sector is to embark on a multi-month rally or sustain a rebound.

Not to beat a dead horse, but precious metals are unlikely to sustain a move higher until the stock market experiences at least a big correction.

The market is focused on the economic recovery and potential for higher nominal yields, which could put a floor under real interest rates. This explains the current struggles in precious metals.

If and when the concern becomes inflation rather than growth, then precious metals will outperform.

Let’s also keep in mind that precious metals made huge moves that require correction in time and price. Gold gained roughly 65% in only 15 months. Silver gained almost 150% in less than five months.

These kinds of moves can correct for a year or even two, with the primary trend remaining intact. More time is needed to clear weaker hands and for fundamentals to improve.

The next move could be a resumption of the correction or a sideways grind.

In the meantime, focus on the companies that can add value and aren’t entirely dependent on rising metals prices, like the majority of the junior industry. Those juniors that can add value over the next year will explode higher when the sector turns and sustains it.

In our premium service, we continue to identify and accumulate those quality juniors with considerable upside potential over the next 24 months. To learn the stocks we own and intend to buy that have at least 3x to 5x potential and more, consider learning about our premium service.