Easy choices lead to a hard life (or at least losses), and because gold's downside move is delayed, it's extremely easy to be bullish on gold right now.

It's easy to get carried away by the day-to-day price action, and it's even easier to feel the emotions that other market participants are feeling while looking at the same short-term price action. Right now, it's tempting to be bullish on gold. It's "easy" to be bullish on gold while looking at what happened in the last 1.5 months. But what's easy is rarely profitable in the long run.

Let's get beyond the day-to-day price swings. The Fed has been keeping the interest rates at ultra-low levels for many months, and it has just pledged to keep them low for a long time. The world is enduring the pandemic, and the amount of money that entered the system is truly astonishing. The savings available to investors skyrocketed. The USD Index has been beaten down from over 100 to about 90. And yet, gold is not at new highs. In fact, despite the 2020 attempt to rally above its 2011 high, gold's price collapsed, and it invalidated the breakout above these all-important highs. It's now trading just a few tens of dollars higher than it had been trading in 2013, right before the biggest slide of the recent years.

Something doesn't add up with regard to gold's bullish outlook, does it?

Exactly. Gold is not yet ready to soar, and if it wasn't for the pandemic-based events and everything connected to them, it most likely wouldn't have rallied to, let alone above its 2011 highs before declining profoundly. And what happens if a market is practically forced to rally, but it's not really ready to do so? Well, it rallies… For a while. Or for a bit longer. But eventually, it slides once again. It does what it was supposed to do anyway - the only thing that changes is the time. Everything gets delayed, and the ultimate downside targets could increase, but overall, the big slide is not avoided.

Let's say that again. Not avoided, but delayed.

And this is where we are right now. In the following part of the analysis, I'm going to show you how the situation in the USD Index is currently impacting the precious metals market, and how it's likely to impact it in the following weeks and months.

Riding investors' emotional roller coaster, the love-hate relationship between financial markets and the USD Index is quite absurd. However, with alternating emotions often changing like the seasons, the greenback's latest stint in investors' doghouse could be nearing its end. Case in point: with the most speculative names in the stock market enduring a springtime massacre, beneath the surface laughter has already turned into tears. And while gold, silver and mining stocks have been buoyed by the intense emotional high that's only visible on the surface, it's only a matter of time before the veneer is lifted.

To that point, while I won't romanticize the USD Index's recent underperformance, it's important to remember that extreme pessimism is often the spark that lights the USD Index's fire. 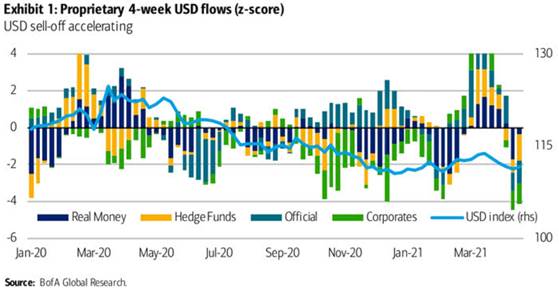 To explain, the bars above track various market participants' four-week allocations to the U.S. dollar, while the horizontal light blue line above tracks the USD Index. If you analyze the right side of the chart, you can see that fund flows have fallen off of a cliff in recent weeks. However, if you analyze the behavior of the USD Index near Jan-20, Jan-21 and Mar-21, you can see that extremely pessimistic fund flows are often followed by short-term rallies in the USD Index. As a result, with the latest readings already breaching -4 (using the scale on the left side of the chart), USD-Index bears have likely already offloaded their positions. 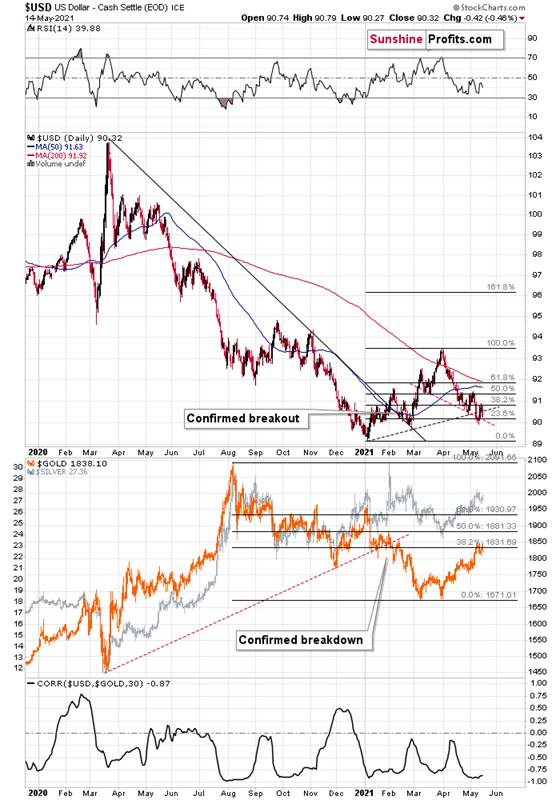 On top of that, with the USD Index hopping in the time machine and setting the dial on 2016, a similar pattern could be emerging. To explain, I wrote on May 11:

While the self-similarity to 2018 in the USD Index is not as clear as it used to be (it did guide the USDX for many weeks, though), there is also another self-similar pattern that seems more applicable now. One of my subscribers noticed that and decided to share it with us (thanks, Maciej!).

Here's the quote, the chart, and my reply:

Thank you very much for your comprehensive daily Gold Trading Reports that I am gladly admitting I enjoy a lot. While I was analyzing recent USD performance, (DX) I have spotted one pattern that I would like to validate with you if you see any relevance of it. I have noticed the DX Index performing exactly in the same manner in a time frame between Jan. 1, 2021 and now as the one that started in May 2016 and continued towards Aug. 16. The interesting part is not only that the patterns are almost identical, but also their temporary peeks and bottoms are spotting in the same points. Additionally, 50 daily MA line is almost copied in. Also, 200 MA location versus 50 MA is almost identical too. If the patterns continue to copy themselves in the way they did during the last 4 months, we can expect USD to go sideways in May (and dropping to the area of 90,500 within the next 3 days) and then start growing in June… which in general would be in line with your analysis too.

Please note the below indices comparison (the lower represents the period between May-Dec 2016 and higher Jan – May 2021). I am very much interested in your opinion.

Thank you in advance. 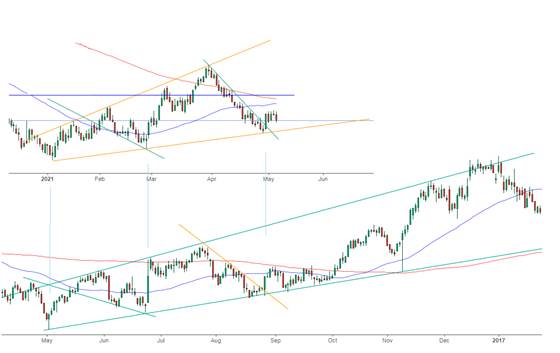 And here's what I wrote in reply:

Thanks, I think that's an excellent observation! I read it only today (Monday), so I see that the bearish note for the immediate term was already realized more or less in tune with the self-similar pattern. The USDX moved a bit lower, but it doesn't change that much. The key detail here would be that the USDX is unlikely to decline much lower, and instead, it's likely to start a massive rally in the next several months - that would be in perfect tune with my other charts/points.

I wouldn't bet on the patterns being identical in the very near term, though, just like the late June 2016 and early March 2021 weren't that similar.

As soon as the USD Index rallies back above the rising support line, the analogy to 2016 will be quite clear once again –the implications will be even more bullish for the USDX and bearish for the precious metals market for the next several months.

Please note that back in 2016, there were several re-tests of the rising support line and tiny breakdowns below it before the USD Index rallied. Consequently, the current short-term move lower is not really concerning, and forecasting gold at much higher levels because of it might be misleading. I wouldn't bet on the silver bullish forecast either. The white metal might outperform at the very end of the rally, but it has already done so recently on a very short-term basis, so we don't have to see this signal. And given the current situation in the general stock market – which might have already topped – silver and mining stocks might not be able to show strength relative to gold at all.

If that wasn't enough, the USD Index's long-term breakout remains intact . And when analyzing from a bird's-eye view, the recent weakness is largely inconsequential. 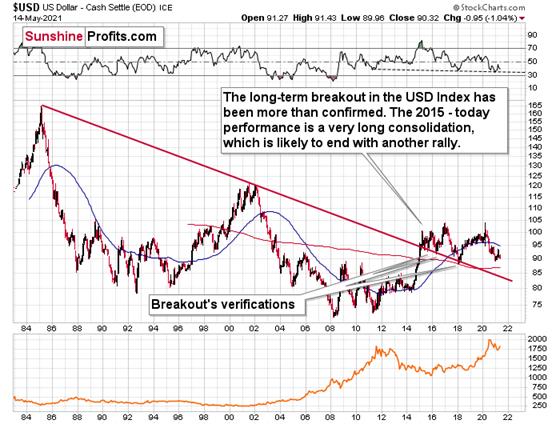 Moreover, please note that the correlation between the USD Index and gold is now strongly negative (-0.92 over the last 10 days) and it's been the case for several weeks now. The same thing happened in early January 2021 and in late July – August 2020. These were major tops in gold. 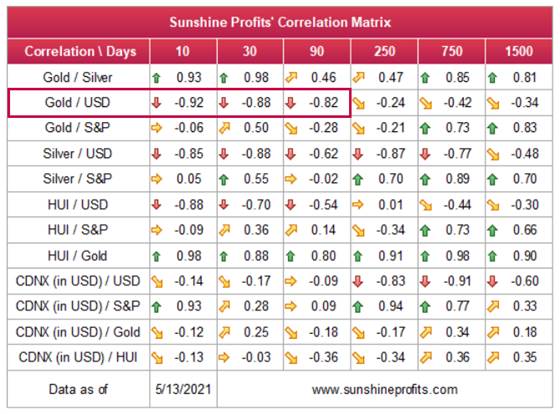 After regaining its composure , ~94.5 is likely the USD Index's first stop. In the months to follow, the USDX will likely exceed 100 at some point over the medium or long term.

Keep in mind though: we're not bullish on the greenback because of the U.S.' absolute outperformance. It's because the region is doing (and likely to do) better than the Eurozone and Japan, and it's this relative outperformance that matters , not the strength of just one single country or monetary area. After all, the USD Index is a weighted average of currency exchange rates and the latter move on a relative basis.

In conclusion, with investors and the USD Index likely headed toward reconciliation, the greenback's medium-term prospects remain robust. With macroeconomic headwinds aligning with technical catalysts, investors' risk-on inertia is already showing cracks in its foundation. And with the USD Index considered a safe-haven currency, a reversal in sentiment will likely catapult the USD Index back into the spotlight. Moreover, with gold, silver and mining stocks often moving inversely to the U.S. dollar, the mood music will likely turn somber across the precious metals market. The bottom line? With the metals' mettle likely to crack under the forthcoming pressure, their outlook remains profoundly bearish over the next few months.