Welcome to our 600th consecutive Saturday Edition of The Gold Update. "Ain't missed a one, hon!" And to all of our valued readers, linkers, publishers and broadcasters across the past decade and 'round the world, our humble and heartfelt thanks. You are why we've made it this far.

Back on 21 November 2009, (with Edition No. 1 which was at the sole request of our great mate JGS), the price of Gold was 1151. Now 11+ years later, price settled yesterday (Friday) at 1844, an increase from then of 60% (and one by as much as 81% upon Gold reaching 2089 on 07 August of last year). Across that time span, the U.S. money supply (as measured by "M2") has increased 145%. Thus in that vacuum alone, Gold today "ought be" 2820 ... and of course when honestly accounting across the past four decades, rightly incorporating therein the increase in the supply of Gold, we've more meaningfully the above Gold Scoreboard valuation right now as 3906.

In turn, that means Gold by such trending construct likely gives us a "valuation" by year-end of 4000.

For hardly is the Fed gonna play dead -- did you see the "Biden Economic Boom" Retail Sales growth for April -- oh wait, there wasn't any ... and upon Gold eventually catching up to "valuation" as is its historical wont, add in the overshoot and we'll one day see Gold 5000 for real.

One wonders as well when we'll one day see S&P 2000 for real. For those of you with children who are still taught arithmetic in school, they clearly can divide the S&P 500 (4174) by two, thus calculating it to be line with the today's actual level of earnings (or lack thereof).

And a thousand thanks to you, Sir Squire. Couldn't have made it this far without you. As to the notion of earnings doubling, those for Q1 of this year are pretty much in place: 433 constituents of the S&P 500 have reported, of which 395 had income (not losses) in both this Q1 and in Q1 of a year ago. And their median earnings increase? ...(wait for it)... 21.8%, even with climbing somewhat out of COVID. That ain't gonna do it. We thus remain on vigilant watch for the "Look Ma! No Earnings!" crash. Coming soon to a portfolio near you. In fact, let's reprise one of our favourite graphics, (the present "live" S&P price/earnings ratio therein boxed at 54.1x):

Gold is up. But as we penned a week ago: "...bear in mind (no pun intended) that the 1800s have been a congestive area for Gold..." Of the 45 technical tests we run on Gold each day -- the best of which make it to our Market Rhythms page -- 40 of them are signaling "Long". However of the five signaling "Short", four of those just so triggered in the past two trading days (the 8 and 6-hour MACDs, plus the 6 and 4-hour Moneyflows ... just in case you're scoring at home). And more broadly beyond all of those studies, we can't ignore that Gold's dashed regression trend line has recently rotated to negative across the weekly bars as shown here:

But at least the weekly parabolic trend is back to Long and we're maintaining our forecast Gold high for this year at 2401. To be sure as the year unfolds, that price becomes more and more of a stretch, indeed one of +30% with 160 trading days left in 2021. But similar Gold rises within that like timeframe occurred in 2006, 2008, 2009, 2011 and 2020. Moreover, as the aforementioned JGS remarked so many years ago: "One day we'll wake up and Gold will be 1,000 points higher than where it closed the prior day." (Contextual example: see January 1980). Just keepin' the faith, babe.

We're keepin' the Econ Baro as well. And by that, how do we know we're in the throes of a "throwing money at everything" mania? The Economic Barometer through its first two decades was a leader of stock market direction as measured by the S&P 500. But over the last year, such observance has become somewhat dysfunctional. This is because "the S&P never goes down anymore" (so to speak) despite the material ebb and flow of the Econ Baro.

And said "mania" is of course all around us: there's the S&P trading at double its earnings valuation and ghastly unsupportive moneyflow, baseless cryptocrap hysteria including delirium over something called "doggy coin", plus spasming over "SPACs" (whatever that is). We're living in the age of abstract "digital tulips": acres of 'em! Why even look at the automobile industry: Ford trades at an earnings multiple of 11.6x, General Motors at 9.0x ... but Tesla at 504.5x.

"Well mmb, gas-powered cars are going to be banned."

Right, Squire. And the jumbo jet'll go wheels up on solar power. (Or as a great StateSide trading colleague remarked upon returning from a trip to the Midwest: "The one thing you won't see in South Dakota is a Prius.")

In any event as we turn to the Econ Baro, we wonder: when does it all go wrong this time 'round? Or is it "different this time" as it always is before it all goes wrong? Got Gold?

'Course, making the rounds of late within the financial in-crowd is the "I-Word" which we sense given the logical direction of both monetary and confiscatory fiscal policy shall morph into the "S-Word" (stagflation). Inflation is on the up-move: 'tis there in the Producer Price Index, the Consumer Price Index, the Pricing of Exports and Imports, and in the Federal Reserve's favoured inflation gauge of the Personal Consumption Expenditures (Core) Index. And it all makes some sense with businesses beginning to ramp up as COVID transits (so they say) from pandemic status to seasonal annoyance. "Got yer jabs? No mask until October!" How cool is that?

Still, some FedFolks such as ViceChair Rich "Clearly" Clarida and FedGov Chris "Well..." Waller are not fully convinced about inflation picking up: rather, this is perhaps a mere "transitory" pickup. And again, given April's Retail Sales not growing (indeed shrinking by the "core" reading), they may have a point.

Further, you long-time readers of The Gold Update surely remember this "speaks-for-itself" graphic:

As for "The Now" in looking at the daily bars of the last three months-to-date for Gold on the left and for Silver on the right, both panels reveal price as appearing a bit toppy. This does make near-term technical sense given (as stated in last week's piece) that the Gold 1800s have a somewhat congestive pricing history. Still, for the yellow metal the upper 1700s ought be safe support, as for the white metal should be the mid-26s:

Then here we've the 10-day Market Profiles for Gold (below left) and for Silver (below right). Gold has built up a good amount of trading volume in these 1800s, however there is that price gap lurking sub-1815 down to 1793. A like gap for Silver shows as 27.00 down to 26.50, although she did have the graciousness to settle for this 600th Edition of The Gold Update right on her most voluminous fortnight price of 27.50. Thank you Sister Silver! 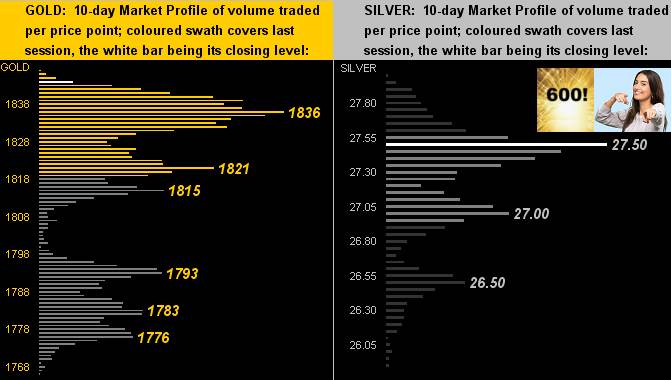 To wrap, a milestone edition wouldn't be compete without this peek at:

Gold's Value per Dollar Debasement, (from our opening "Scoreboard"): 3906

Trading Resistance: none by the Profile

Next week we'll pen No. 601 replete with the expected knowledge and fun. For Gold in our mind remains No. 1! 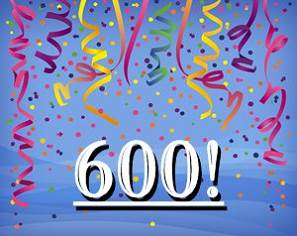