The latest FOMC minutes were dovish, especially in light of the recent increase in inflation and elevated asset valuations. What does it mean for gold?

Thursday, the FOMC published minutes from its last meeting in April . They've shown two things doing that: first, that some of the central bankers are worried about the inflation and elevated asset valuations; and, second, that the Fed is going to remain dovish despite all these concerns .

Indeed, some FOMC participants noted that the demand for labor had started to put some upward pressure on wages. Moreover, a number of them pointed out the protracted supply disruptions and the insufficient pre-emptive hawkish reaction from the Fed as potentially inflationary factors:

A number of participants remarked that supply chain bottlenecks and input shortages may not be resolved quickly and, if so, these factors could put upward pressure on prices beyond this year. They noted that in some industries, supply chain disruptions appeared to be more persistent than originally anticipated and reportedly had led to higher input costs. (…)

A couple of participants commented on the risks of inflation pressures building up to unwelcome levels before they become sufficiently evident to induce a policy reaction.

When it comes to financial stability and asset valuations, several FOMC members pointed out elevated risk appetite and very low credit spreads . And certain participants noted dangers related to the low interest rates and excessive risk-taking: if the risk appetite fades, the asset prices could decline with potentially harmful consequences for the financial sector and the economy:

Regarding asset valuations, several participants noted that risk appetite in capital markets was elevated, as equity valuations had risen further, IPO activity remained high, and risk spreads on corporate bonds were at the bottom of their historical distribution. A couple of participants remarked that, should investor risk appetite fall, an associated drop in asset prices coupled with high business and financial leverage could have adverse implications for the real economy. A number of participants commented on valuation pressures being somewhat elevated in the housing market. Some participants mentioned the potential risks to the financial system stemming from the activities of hedge funds and other leveraged investors, commenting on the limited visibility into the activities of these entities or on the prudential risk-management practices of dealers' prime-brokerage businesses. Some participants highlighted potential vulnerabilities in other parts of the financial system, including run-prone investment funds in short-term funding and credit markets. Various participants commented on the prolonged period of low interest rates and highly accommodative financial market conditions and the possibility for these conditions to lead to reach-for-yield behavior that could raise financial stability risks.

So, given all these concerns about financial stability and higher inflation, the Fed should send some hawkish signals, right? Not at all! On the contrary, the US central bank reiterated its ultra-dovish stance, justifying that the economy was far from achieving full employment.

Participants commented on the continued improvement in labor market conditions in recent months. Job gains in the March employment report were strong, and the unemployment rate fell to 6.0 percent. Even so, participants judged that the economy was far from achieving the Committee's broad-based and inclusive maximum-employment goal. Payroll employment was 8.4 million jobs below its pre-pandemic level. Some participants noted that the labor market recovery continued to be uneven across demographic and income groups and across sectors.

After all, higher inflation would only be transitory, and when these short-term factors fade, inflation will decrease:

In their comments about inflation, participants anticipated that inflation as measured by the 12-month change of the PCE price index would move above 2 percent in the near term as very low readings from early in the pandemic fall out of the calculation. In addition, increases in oil prices were expected to pass through to consumer energy prices. Participants also noted that the expected surge in demand as the economy reopens further, along with some transitory supply chain bottlenecks, would contribute to PCE price inflation temporarily running somewhat above 2 percent. After the transitory effects of these factors fade, participants generally expected measured inflation to ease. Looking further ahead, participants expected inflation to be at levels consistent with achieving the Committee's objectives over time (…) Despite the expected short-run fluctuations in measured inflation, many participants commented that various measures of longer-term inflation expectations remained well anchored at levels broadly consistent with achieving the Committee's longer-run goals.

Yeah, sure, but why should we believe the Fed if they were surprised by the CPI readings in April? They anticipated inflation moving above 2 percent, and meanwhile the CPI inflation surged above 4 percent as the chart below shows! 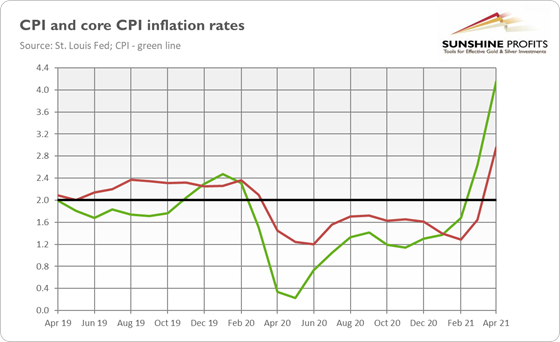 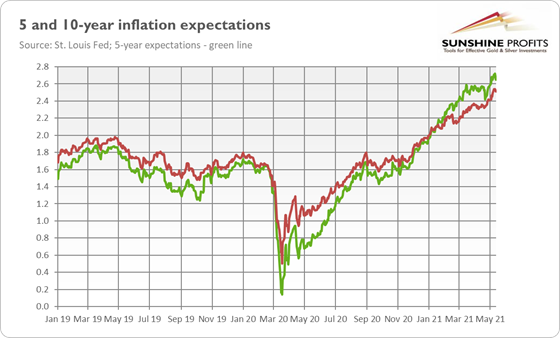 Interestingly, even the Fed staff doesn't believe in transitory inflation. After all, they forecast that the actual GDP would be above its potential until 2022-2023:

With the boost to growth from continued reductions in social distancing assumed to fade after 2021, GDP growth was expected to step down in 2022 and 2023. However, with monetary policy assumed to remain highly accommodative, the staff continued to anticipate that real GDP growth would outpace that of potential over much of this period, leading to a decline in the unemployment rate to historically low levels.

Economics 101 teaches us that when the economy operates above its potential, it implies overheating and inflation that reflects more fundamental or lasting factors than base effects and short-term supply disruptions.

What do the recent FOMC minutes imply for gold? Well, the Fed remaining dovish despite all the inflationary risks and elevated asset valuations (many assets plunged yesterday, especially cryptocurrencies) is bullish for gold .

Sure, a few members became ready to start talking about tapering the quantitative easing and tightening the monetary policy :

A number of participants suggested that if the economy continued to make rapid progress toward the (policy-setting) Committee's goals, it might be appropriate at some point in upcoming meetings to begin discussing a plan for adjusting the pace of asset purchases.

However, "a number" is not "the majority", so we shouldn't expect such a discussion in the mainstream anytime soon, especially in light of the disappointing April nonfarm payrolls and recent declines in the stock market.

The price of gold rose yesterday, approaching $1,900. It might have been due to the FOMC minutes, but also the sell-off in cryptocurrencies and the following outflow of money from them into old, good gold. 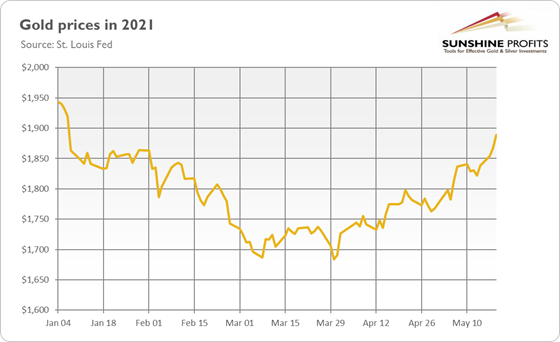 Given these shifts in the marketplace, it seems that Fed's worries about fading risk appetite were justified. If risk appetite wanes further, gold should shine as a safe-haven asset .