Gold surges past $1900 in trading today

As we spoke about yesterday, the market forces and events which have taken gold to higher pricing since the end of March are still dominantly in play. The two primary forces are dollar weakness and data indicating an uptick in inflation. These two factors greatly affect Treasury yields, and in turn, lower Treasury yields increase the bullish sentiment in gold. Recently the U.S. Labor Department showed that the consumer price index jumped to 4.2% in April. It is up 2.6% from the numbers revealed in March.

According to a CNBC article titled, Gold hits 4 ½ month peak as dollar, U.S. yields weaken, "Gold prices scaled a more than four-month peak on Tuesday, as the dollar and U.S. Treasury yields slipped amid expectations that the U.S. Federal Reserve will keep its monetary policy accommodative. U.S. gold futures settled up 0.7% at $1,898. Data showed a U.S. consumer confidence index for May eased to 117.2." 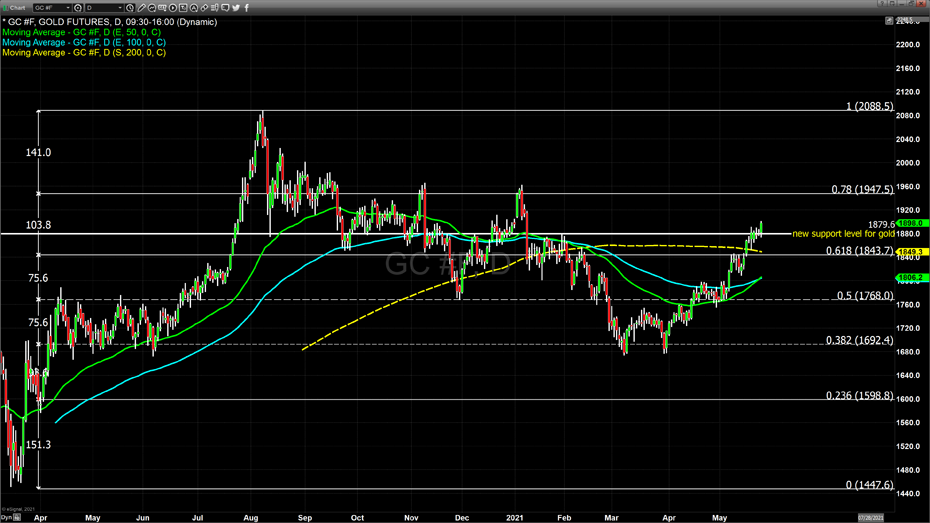 CNBC's article also quoted Edward Meir, of ED&F Man Capital Markets analyst, saying that "markets are getting a sense that inflation is more deeply embedded than what the Fed is currently expecting ... this is leading to money going into inflation hedges like gold. Gold has a good chance of getting to $2,000 during the second half of this year."

The slight decline in U.S. consumer confidence as traders and market participants become convinced that the Federal Reserve will maintain its highly accommodative monetary policy for a longer period of time. This was just the news that would fundamentally ignite gold, taking the futures contract briefly over $1900 per ounce. 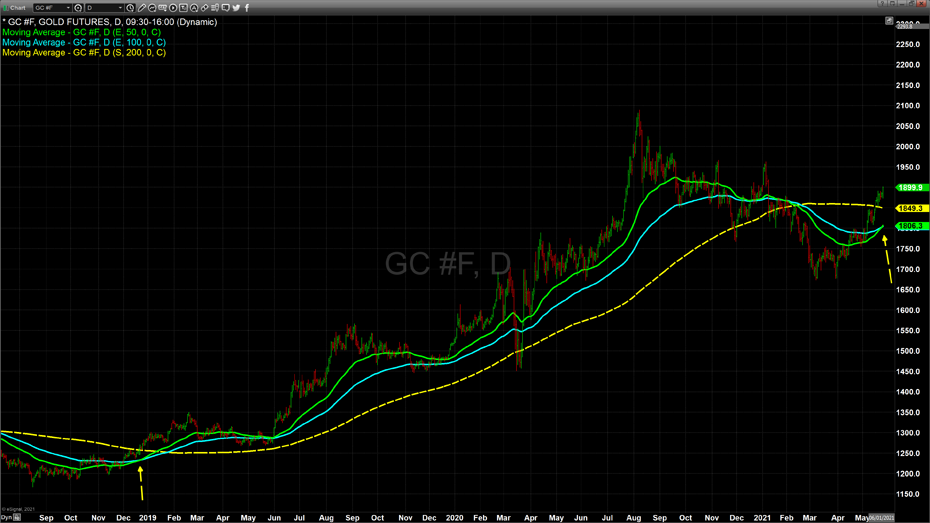 Although dollar weakness contributed light tailwinds to today's dramatic rise, it was predominantly traders and investors bidding the precious yellow metal higher. Currently, the dollar index is fixed at 89.67%, which is a decline of 18 points, or -0.20%. The dollar index has been in a defined downtrend since the end of March, which correlates directly to the second bottom of gold pricing, which occurred at the same time.

Our technical studies indicate that there is still solid support for gold between $1849 (the current fix of the 200-day moving average) and $1851, the 61.8% Fibonacci retracement. The data set used for the Fibonacci retracement begins at $1952 and ends at $1671. However, we do see a new support level coming into play which is $1879.60, based on the high trading prices achieved at the end of January 2020. It also must be noted that we did get a golden cross between the 50- and 100-day exponential moving averages. The last occurrence of a golden cross between these exponential moving averages was at the beginning of 2019. Using the same data set, the resistance we currently see occurs at $1898, which is the 78% Fibonacci retracement level. Above that is the key psychological level of $1900 per ounce.