Institutional investors are rotating out of bitcoin and into gold 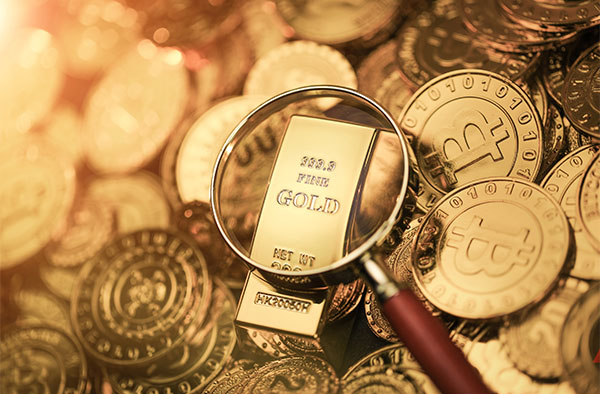 One of the biggest reasons why people invest in assets like gold, Bitcoin and altcoins is because they act as hedges against bad government policy.

Look at Venezuela. The beleaguered country's currency, the bolivar, isn't worth the paper it's printed on due to draconian socialist policies. As such, an outsized percentage of Venezuelans rely on Bitcoin as a store of value and to help make ends meet.

A less severe example—though no less impactful—is Canada. In case you haven't heard, there's a new bill being considered, C-10, that some critics worry could lead to the Canadian government's regulation of the content you post on YouTube, Facebook and other social media sites. Although the bill's main advocate, Heritage Minister Steven Guilbeault, has tried to make it "crystal clear" that the government seeks only to oversee "professional" content creators and not everyday social media users, fears persist that people's freedom of speech is in jeopardy.

Even Google, which owns YouTube, has voiced concerns. "We remain concerned about the unintended consequences, particularly with regards to the potential effects on Canadians' expressive rights," the company said in a statement.

This is precisely what members of the crypto community call FUD, or fear, uncertainty and doubt. Normally used to refer to something or someone who tries to spread negative information about crypto (Elon Musk?), FUD also summarizes how Canadians feel about the proposed legislation.

The Bitcoin Pullback Is Normal and Healthy

Speaking of Elon Musk, investors yanked $98 million out of Bitcoin investment products in the week before last, the most on record, after the Tesla chief announced in a tweet that he was suspending vehicle purchases using the cryptocurrency. This amount was enough to offset net inflows of $48 million into all other digital asset funds. Ether funds, for instance, attracted $27 million, bringing the crypto's weekly trading volume to an incredible $4.1 billion, the most ever, according to CoinShares.

Bitcoin came under pressure from more than just Musk's distorted comments on its energy usage. The Chinese government has also cracked down on the crypto ecosystem, banning financial institutions from providing services related to digital assets. A hotline has even been set up in one Chinese province that people can use to snitch on neighbors they suspect of mining cryptos.

Of course, this is only the 10,000th time China has come out against crypto. More FUD.

Last week's selloff was dramatic. By Wednesday, Bitcoin was down more than 40% from its all-time high of $64,000, set in mid-April. The token's market dominance fell to a three-year low of 40%.

I believe the pullback is healthy. It's important for investors to remember that this kind of volatility is normal for such a still-emerging, speculative asset class. It's also important to keep things in perspective: Bitcoin is still up more than 30% so far this year, 315% for the 12-month period.

So where have all the millions that have flowed out of crypto funds gone to? Would you be surprised to hear gold?

According to an analysis of CME futures contract, large institutional investors could be shifting away from Bitcoin in favor of gold. "Over the past month, Bitcoin futures markets experienced their steepest and more sustained liquidation since the Bitcoin ascent started last October," JPMorgan wrote in a recent note to investors. These liquidations have corresponded with inflows into gold ETFs.

The price of the yellow metal broke through key resistance last week, touching $1,890 an ounce for the first time since January on a declining U.S. dollar. The next test is $1,900, and after that, its all-time high of $2,067.

Whereas Bitcoin is a speculative asset, gold is a well-established, highly liquid asset with a centuries-long track record. We know what the price drivers are.

Besides responding to a weaker dollar, gold is finding traction from ongoing unprecedented money-printing and monetary stimulus. The amount of M2 money circulating the U.S. economy is up about 21% from a year ago. Meanwhile, the Federal Reserve maintains its bond-buying program. As of last week, the size of the central bank's balance sheet was just under a staggering $8 trillion.

Inflation also continues to weigh on investors' minds, improving the investment case for gold. Last week we saw even more data emerge warning markets that prices could be headed higher in the near term.

For one, input prices for manufacturers in the Philadelphia region accelerated at their fastest pace in over 40 years. The Philly Fed's prices paid diffusion index rose to 76.8 this month, the highest reading since March 1980. Three quarters of manufacturers reported price increases while none reported decreases. Expect these higher costs to be passed on to consumers.

Much of the price increases could be related to record and near-record shipping costs. The rate to ship a 40-foot container continues to climb as demand far outpaces supply. The Drewry World Container Index rose 7% during the week ended last Thursday to touch $5,193, a nearly fourfold increase from a year earlier. Freight rates from Shanghai to Rotterdam reached a new all-time high of $9,865 per 40-foot container.

Fuel costs have also been rising in the wake of the cyberattack on the Colonial Pipeline, which delivers 45% of gas supply to the Southeast. Last week, GasBuddy predicted that gas prices would be at their most expensive this Memorial Day weekend in seven years. Gas will average $2.98 per gallon this coming weekend, the company said, the most since 2014 when it was $3.66. This could have the effect of discouraging some fully vaccinated families from taking a well-deserved summer road trip.

While I'm on the topic of travel, this summer could mark the turnaround we've been hoping for in terms of commercial flight demand. As I've shared with you before, the European Union plans to reopen its borders to fully vaccinated visitors, and last week, American Airlines announced that it's now allowing passengers to use the VeriFLY app to verify their vaccination status before flying. This gives customers travel access to the Bahamas, El Salvador and Guatemala. Wheels up!

All opinions expressed and data provided are subject to change without notice. Some of these opinions may not be appropriate to every investor. By clicking the link(s) above, you will be directed to a third-party website(s). U.S. Global Investors does not endorse all information supplied by this/these website(s) and is not responsible for its/their content. Beta is a measure of the volatility, or systematic risk, of a security or portfolio in comparison to the market as a whole.

Current Prices Paid reports the change in Prices Paid compared to the previous month for reporting manufacturing firms. The diffusion index is calculated by taking the percent reporting increases and subtracting the percentage reporting decreases. The U.S. dollar index (USDX) is a measure of the value of the U.S. dollar relative to the value of a basket of currencies of the majority of the U.S.'s most significant trading partners. M2 is a measure of the money supply that includes cash, checking deposits, and easily convertible near money. The Drewry World Container Index (WCI) measures the bi-weekly ocean freight rate movements of 40-foot containers in seven major maritime lanes. It is expressed as an average price per 40-foot container (in US$).

Holdings may change daily. Holdings are reported as of the most recent quarter-end. The following securities mentioned in the article were held by one or more accounts managed by U.S. Global Investors as of (03/31/2021): American Airlines Group Inc., Tesla Inc.