S&P 500 attempted a breakout, but retreated. Is that a reversal, or proof of more pressure building up? Much starker move in the high yield corporate bonds would speak in favor of a reversal, but only until the higher end of the debt markets is examined. Or the volume for that matter, as these would put the reversal hypothesis to rest.

VIX continues turning lower, and option traders are getting the message – finally, the put/call ratio appears to be on a declining path, meaning that fewer market participants are expecting another shoe to drop. As if one fell in the first place, really. Is that the worst of the inflation scare being over, for now? Probably yes, and the retreating Treasury yields are mollifying – but as explained in ample detail, this calm before the (autumn) storm, is deceptive. Calling the Fed's bluff, precious metals (and some commodities) are onto something, really.

One more proof why the stock market bears are at a disadvantage, comes from other indices, namely the Russell 2000 (look for value to benefit), and emerging markets. The magic of ample Fed support is making its way through the system, lifting prices in many asset classes amid still rampant speculation. It's only the cream of select commodities that has been taken off – in the big scheme of things, nothing but a consolidation within an existing secular bull market, is happening there. While the inflation trades have been dialed back to a degree, they haven't been broken as the Fed is in a reactive, not proactive mode. More precisely, it remains in denial of the inflation ahead.

Gold is holding up strongly, and has been in little need of miners' support lately. Both are consolidating, readying for another push higher that would coincide with further retreat in long-dated Treasury yields – unless these are counterbalanced with the collapse of inflation trades. Once again, I am not looking for that to happen – soft patch, prolonged commodities consolidation yes, turn to deflation no. In such an environment, silver would have a tougher ride and be vulnerable to volatile swings defined by how the inflation, yields, expectations and Fed action bets play out.

Crude oil isn't offering but token discounts to enter on the buyers' side, and remains reasonably well supported by the oil index price action. The lower daily volume isn't an issue – the daily chart remains bullish.

Bitcoin and Ethereum went through a steep overnight correction, and they would enter the Memorial weekend stormy waters not exactly in a rising mode. While the sellers appear to be in control, odds are that Ethereum would turn around first, followed by Bitcoin moving with less veracity, but still – even later today. The daily indicators are likely to carve out a bullish divergence next. I'll discuss it more in the nearest upcoming analysis, which would be on Tuesday – enjoy your long weekend!

Gold very modestly declined even as the miners opened threateningly down. The temporary woes might not be over, but illustrate the yesterday mentioned limited scope for gold to decline.

Supported by the copper to 10-year Treasury yield ratio, the precious metals sector stood the test yesterday, but we might be at the higher range of the ratio's range, which would send especially silver under pressure once the ratio's correction occurs. 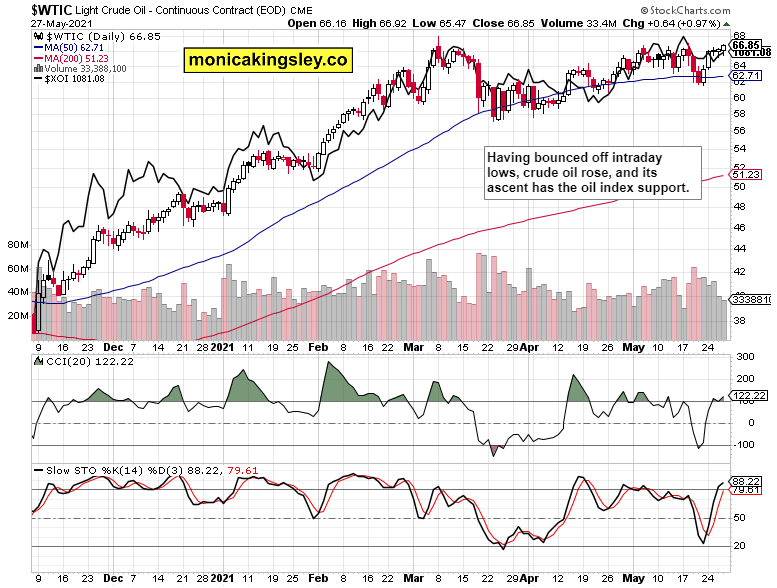 Crude oil's slow march higher continues, and neither the oil index nor the volume signal weakness ahead today.

S&P 500 is likely to remain choppy with a general upward bias that only a clear break of 4,180 would invalidate, which is unlikely to happen though – especially with the end of month window dressing.

Gold and silver might see modest profit taking today, but the upswing remains on solid footing, awaiting the miners to join and lead again.

Crude oil offered an even more modest intraday downswing than the day before – one that tellingly didn't attract new sellers.

Bitcoin and Ethereum are likely to refuse lower prices, but the only open question remains when that would happen – still before the Memorial weekend, or after.

Thank you for having read today's free analysis, which is available in full at my homesite – and includes the stock market and crypt parts. There, you can subscribe to the free Monica's Insider Club , which features real-time trade calls and intraday updates for all the four publications: Stock Trading Signals, Gold Trading Signals, Oil Trading Signals and Bitcoin Trading Signals.