A number of happenings in the copper market conspired to elevate the spot price beyond $4.60 a pound on Thursday, confirming Ahead of the Herd's suspicions that a new wave of resource nationalism in some of the largest copper-producing nations is washing over the sector. 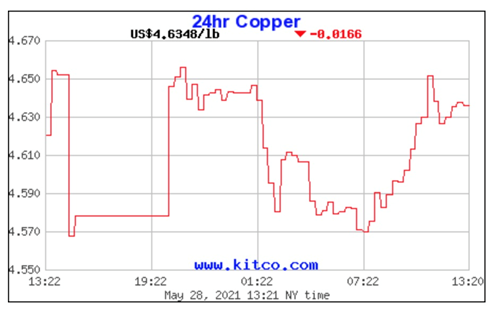 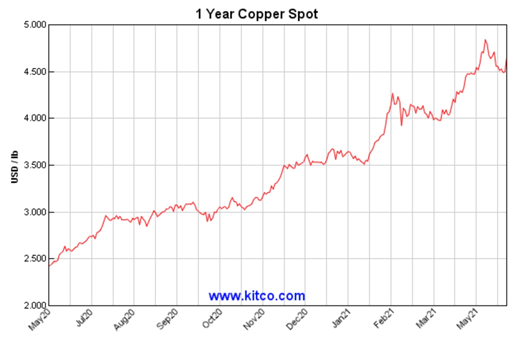 Resource nationalism is the tendency of governments to assert control, for strategic and economic reasons, over natural resources located on their territories. It has been identified as one of the key risks for investors in the natural resources space.

With the copper price soaring on tight supply and heavy demand, as the world's biggest economies revive following a year of coronavirus-related restrictions, the temptation for producer nations to cash in on more valuable copper reserves to pay for social programs is proving hard to resist.

Chile and Peru, the number one and two producers, are both seeking to raise the royalty tax on copper miners, while in the DRC, Africa's top copper-mining country, the government has just slapped a ban on the export of copper and cobalt concentrates — an action almost identical to what has happened in Indonesia with nickel.

Adding to these events, workers at BHP's Spence and Escondida mines in Chile downed tools, Thursday, fueling concerns about the long-term supply of the industrial metal, that has become essential not only for its traditional uses in construction, transportation and telecommunications, but the shift from fossil fuels to electrification and decarbonization.

The positive price action had CIBC upgrading its copper forecast to $5.25 a pound by the end of this year.

"As vaccines continue to roll out, we view a global economic recovery, additional government stimulus, and rising inflation expectations as positive momentum drivers for base metals," the Canadian bank said in a report.

If copper reaches those heights, it will be into uncharted territory, as the historical copper graph below shows.

Continuing with Chile, the South American nation is fast becoming a liability for copper miners.

Triggered by the worst social unrest in a generation, anchored in rampant inequality, the country reportedly has just elected an assembly that will place responsibility for writing a new constitution in the hands of the left wing.

The reforms could give more power to indigenous communities and expand water rights, including a potential ban on mining in areas where there are glaciers, along with increased state ownership of water desalinated by mining companies.

There is also proposed legislation that, if approved by the Chilean Senate, would impose a royalty as high as 75% on sales of copper, if copper is above $4 like currently.

In a note this week, Goldman Sachs said the new law could put at risk 1 million tonnes of annual copper supply representing about 4% of global output.

The investment bank clarifies that more than half of foreign-owned copper mines in Chile have tax agreements in place that don't expire until 2023, but future mines would be in jeopardy.

"All else equal, we believe fiscal uncertainty will act as an overhang on mining companies' decision-making processes to sanction new projects, which could further exacerbate our expectations of a longer-term copper supply gap," Goldman Sachs said.

A Reuters story adds that while Chile mines close to a third (28%) of the world's copper, for more than a decade it has lost market share, "hobbled by declining ore grades and ageing projects."

The Congolese government's decision this week to ban the export of copper and cobalt concentrates shows that resource nationalism is alive and well in the African copper belt. The DRC and Zambia are the continent's top two red metal producers, in 2020 outputting a respective 1.3 million and 830,000 tonnes.

The export ban coincides, rather uncomfortably it seems, with the start of production at Ivanhoe Mines' Kamoa-Kakula project. Kakula, the first mine at the project developing one of the world's largest copper deposits, is expected to generate 3.8 million tonnes of ore a year at an average grade well in excess of 6% copper, the company states. (Note: this is extremely high-grade. Copper mines in British Columbia average 1.4% Cu).

As an aside, Robert Friedland's Ivanhoe Mines on the same day of the announced ban issued a news release suggesting that they knew about it — "the concentrate ban is not new" — and that Ivanhoe received the order from customs officials. Still, it must have come as quite a shock.

However, the company also reveals that a "sector-wide derogation" exempting certain parties from the ban expired on April 21 and that the Minister of Mines is now granting derogations on a case by case basis. Ivanhoe, the company reports, is currently talking to the Minister about getting an exemption.

Here's where it gets interesting. The way Ivanhoe could get around the export ban is by building a copper smelter in the DRC. That would sit well with the government and comply with the spirit of the export ban, which is to beneficiate ore domestically and thereby bring the country more revenues than sending much cheaper raw ores abroad for refining.

According to the news release, Ivanhoe with its Chinese partner Zijin Mining "is assessing the construction of a smelting complex at Kamoa-Kakula for the production of blister and anode copper. This is all part of our intention to operate responsibly in the DRC for generations to come, and for the benefit of all of our stakeholders, including the Government of DRC who are our 20% partner in Kamoa Copper."

Those who have been following my musings on Indonesian nickel mining/ processing will see something familiar here.

Last year the Southeast Asian nation banned ore exports amid a plan to develop a complete nickel supply chain, meaning raw ore that was previously destined for processing overseas would be "beneficiated" locally. Indonesia wants to become a global hub for EV production, from extraction to processing into metals and chemicals used in batteries, all the way up to building EVs.

Yet there is a serious flaw in this plan, and it relates to the type of nickel deposits found in and around Indonesia.

Existing sulfide nickel mines are becoming depleted, and nickel miners are having to go to lower-quality, but more expensive to process, as well as more polluting, nickel laterites such as those found in the Philippines, Indonesia and New Caledonia.

One way to solve the problem, is to mine plentiful laterites and convert the nickel product into nickel sulfate, as the Chinese are planning to do in Indonesia.

There is an obvious advantage in doing so.

Class 1 nickel powder for sulfate production enjoys a large premium over LME nickel prices, but for miners to switch from lower-grade to battery-grade material requires huge investments to upgrade refining and processing facilities.

Reuters has reported on the multi-billion-dollar Chinese-led project to produce battery-grade nickel chemicals, that Indonesia hopes will attract EV manufacturers to the country.

Recently Chinese battery-maker CNGR Advanced Material Co announced a joint venture in Indonesia to produce nickel matte, an intermediate product that can be processed into battery-grade nickel. CNGR would buy the matte from Chinese steel giant Tsingshan Holding Group, and process it at Tsingshan's $243 million smelting project on the Indonesian island of Sulawesi.

The country expects to double investment in nickel processing from 2020 to $35 billion in 2035. Jakarta has also signed a $9.8 billion EV battery deal with South Korea's LG Energy Solution.

Could China be planning on doing the same thing in the DRC as it has done in Indonesia? Ie. investing in local mineral processing plants to gain the government's favor and lock up the country's copper and cobalt supply? Two facts support this conclusion: one, the Congolese government already owns 20% of the Kamoa-Kakula project; second, China's Zijin Mining is also a part owner, and we already know that Ivanhoe Mines is looking to build a smelter in the DRC. The Chinese government is closely aligned to mining companies, as it is with all of its state-owned enterprises, so it would not surprise me in the slightest to learn that China is planning on building more smelters in Africa's top copper-producing nation.

China long ago put a lock on the DRC's cobalt.

Consider: China controls about 85% of global cobalt supply, including an offtake agreement with Glencore, the largest producer of the mineral, to sell cobalt hydroxide to Chinese chemicals firm GEM. China Molybdenum is the largest shareholder in the major DRC copper-cobalt mine Tenke Fungurume, which supplies cobalt to the Kokkola refinery in Finland. China imports 98% of its cobalt from the DRC and produces around half of the world's refined cobalt.

A report by Roskill forecasts total copper consumption will exceed 43 million tonnes by 2035, driven by population and GDP growth, urbanization, and electricity demand. Total world mine production in 2020 was only 20Mt.

The demand pressure about to be exerted on copper producers in the coming years all but guarantees a market imbalance, resulting in copper becoming scarcer, and dearer, with each ambitious green initiative rolled out by governments, whose backs are against the wall due to negative fall-out from global warming.

Why can't we just mine more copper?

The problem is existing copper mines are running out of ore, and the capital being invested in new mines is far below the level needed.

The pipeline of copper development projects is the lowest it's been in decades. Of the properties that might lend themselves to a significant boost in copper production, thereby serving to address this coming shortage, few are anywhere close to completion.

As previously reported, global mined copper production will drop from the current 20Mt to below 12Mt by 2034, resulting in a supply shortfall of 15Mt. By then, over 200 copper mines are expected to run out of ore, with not enough new to take their place.

Will there be enough copper for future electrification needs, globally? And remember, in addition to electrification, copper will still be required for all the standard uses, including copper wiring used in construction and telecommunications, copper piping, and copper needed for the core components of airplanes, trains, cars, trucks and boats.

The short answer is no, not without a massive acceleration of copper production, and exploration, worldwide.

We are far from alone in our thinking. This week Bloomberg came out with a story quoting the CEO of Freeport McMoRan, a US-based major copper miner.

"There's no shale oil for copper," Richard Adkerson told Bloomberg Television. "Unlike the oil industry, where you have an ongoing flow of discoveries and now with a new element of shale coming in, copper mines of size are very rare to find."

He went on to say the industry is facing a supply scarcity that will require both copper substitution and increasing recycling.

(In a previous article we proved we have reached peak mined copper, referring to the point when mined supply is unable to meet demand without recycling.)

And with copper mines taking so long to develop — up to 20 years in regulation-happy jurisdictions like Canada and the United States — this is not a problem likely to go away anytime soon.

If prices were to double tomorrow, Adkerson says Freeport would be unable to bring on new supply within five years. This is a telling indictment of the copper sector's plight, and yet another reason why I remain a steadfast copper bull.