Why most analysts are understating battery raw materials demand (and it's not the reason you think!)

Any long-suffering readers who've been with me for a while will know that I tend to get on my high horse about the issue of many consultants and investment banks understating their EV sales forecasts and therefore understating likely battery materials demand. I've written extensively about this in the past and won't regurgitate those points here (even though I still think consensus EV sales forecasts are way too low for the next 5 years!).

This article is about something that even a number of battery material specialists are not picking up in their models. And it's a doozy.

You see the battery industry has a bit of a problem. And that problem is battery yield. Namely the fact that quite a high percentage of the cells manufactured in battery plants fail the rigorous testing regime that EV batteries have to go through. And given that EV batteries are now 75% of lithium-ion battery demand and rising, this is the majority of batteries. 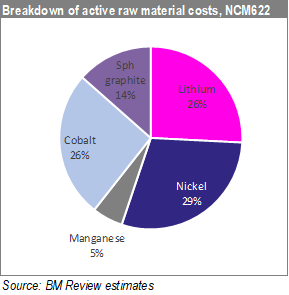 Now you may be thinking that we're talking about a couple of percentage points of losses here. But actually the battery industry's dirty little secret is not so little after all. In fact, for a mature chemistry and an operating factory, yield losses may be c.10%. For new chemistries, new battery formulations (which is pretty much the status quo during this period of rapid technological advancement in the industry) and new factories, yield losses may be as high as 30%.

We would estimate that on average 20% of the batteries currently being produced are not fit for purpose.

So what happens to these batteries? Well, going forward they're likely to be recycled. They do have a substantial residual value in terms of the materials used to make them and that's only likely to increase as raw material prices rise. In my last Blog article I estimated that, at current raw material prices, the active materials in an NCM622 battery had a residual value of c.US$2000 (for a 50kWh battery) and even an LFP battery might be worth US$1400 for a 50kWh unit.

But there are two problems here: 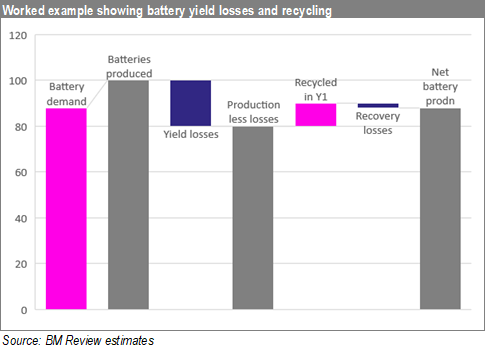 For the next year the remaining 10% of faulty batteries would be available to be recycled with associated recovery losses. But bear in mind that the industry is expanding so rapidly at the moment (say 60% per year) that the amount of material reclaimed may only amount to 5% of the next year's battery material needs and the amount of faulty batteries will far outweigh that, meaning that raw material demand is likely to continue to be understated, potentially by c.7%.

The calculations above assume some degree of steady state production but, for now, there isn't 100% recycling capacity coverage in place and there are a lot of new battery factories so, for the next few years at least, the raw material losses are likely to be closer to 15% of the market size, rather than 7%.

So bear that in mind the next time you see an analyst's supply/demand model for battery raw materials. The demand side of the equation may be substantially understated.