Gold is fluctuating around $1,900 amid a sideways trend in real interest rates and a decline in inflationary expectations.

Gold surpassed $1,900 at the end of May. However, it has been struggling since then to rally decisively above this level. Instead, the price of the yellow metal has been oscillating around this level, as the chart below shows. 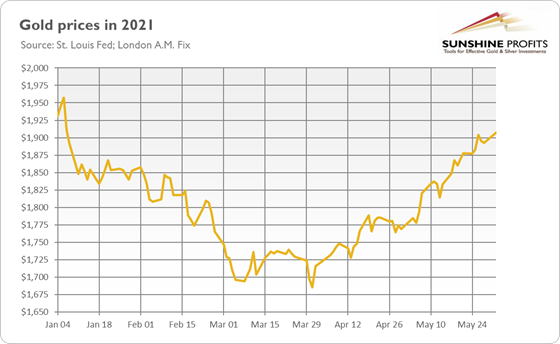 Why is that and what does it mean for the gold market? Well, on the one hand, we could say that the yellow metal is in a normal pause during an uptrend. However, the lack of more aggressive price appreciation amid high inflation , ultra-loose monetary policy , depreciating dollar and super easy fiscal policy could be seen as disturbing.

From a fundamental perspective, the timid price behavior of gold could be explained by a sideways trend in real interest rates . Their lackluster movement, in turn, could have resulted from the downward correction in long-term inflationary expectations (blue line), as the chart below shows. 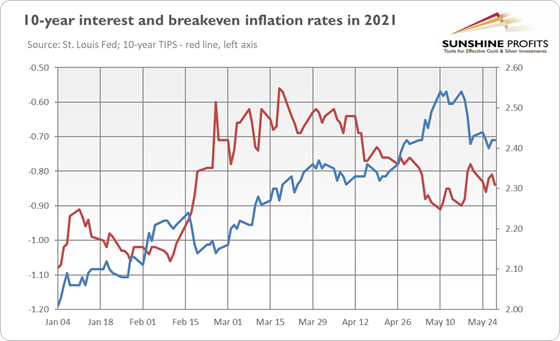 Investors’ inflation bets have lost some steam, starting a debate about whether expectations of inflation have already peaked. After all, it might be the case that inflation fears have been exaggerated and investors have overshot, as they often do. In addition, some of the FOMC members signaled that it could be a good idea to begin discussing tapering quantitative easing .

If this was really the peak of inflationary expectations, the news would be bad for gold, which is seen as a hedge against inflation . However, many analysts expect that inflation expectations have room for further rises and could reach levels close to 3%.

What does all this mean for the price of gold? Well, market-based inflationary expectations have recently declined, dragging the real interest down and restraining gold from moving upward. However, inflation worries won’t disappear anytime soon . After all, the PCE inflation , the favorite Fed’s inflation gauge, jumped 3.1% in April, beating the expectations. Even in the Eurozone, where price pressure is usually lower than in the US, the inflation rate rose from 1.6% to 2% in May, which is the highest level since October 2018.

Furthermore, consumer-based inflationary expectations jumped from 3.4% to 4.6% in May, so inflation worries are still around. They could increase the uncertainty and increase the safe-haven demand for gold . Although higher uncertainty could limit some spending, we should remember that households have accumulated more than $2 trillion in excess savings during the pandemic . So, inflation may be more lasting than many policymakers and pundits believe . If inflation doesn’t turn out to be merely transitory, gold could gain some fuel for the upward march.

Higher inflation implies weakened purchasing power of the dollar. If we add America’s growing public debt problem to constantly rising prices, the downward trend in the greenback could continue, supporting the price of gold.

Of course, only time will tell whether or not current inflation worries are justified. However, please note that the economy didn’t collapse last year due to a lack of liquidity but due to the Great Lockdown . The implication is that the Fed has increased money supply well above demand , injecting a lot of liquidity into the system. The expansion in the Fed’s balance sheet and commercial banks’ credit (after all, this time not only the monetary base has jumped, but the broad money supply as well), combined with the Great Unlocking, generated a great inflationary wave that lifted all asset classes: from commodities, through equities, to cryptocurrencies , including crypto-memes like Dogecoin.

And it might be just a coincidence, but the Fed introduced a new monetary regime that is prone to higher inflation also during the last year. A cynical interpretation could be that the Fed knew very well that its last year’s monetary expansion could result in higher inflation.

Hence, inflationary expectations didn’t have to peak, and they could increase later this year supporting gold prices . Having said that, if inflation really turns out to be only transitory, the current situation wouldn’t be much different from 2011-2013, when gold prices struggled amid expectations of monetary policy tightening . Of course, the Fed is even more dovish now under Powell than under Bernanke or Yellen , but higher inflation would be an additional argument for a bull market in gold .